Images at the Highest Angular Resolution in Astronomy

An international team of researchers including MPIfR scientists has obtained an image of radio emission in the active galaxy OJ 287 at a record angular resolution of 12 µas. This has been made possible with the VLBI technique combining signals recorded at multiple radio telescopes. Bringing together twelve radio telescopes distributed across the globe and an orbiting 10-metre antenna on board of the satellite Spektr-R launched and operated by the Russian Space Agency, the researchers have effectively constructed a radio telescope with a diameter of 193,000 km and used it to peer into the very heart of the galaxy OJ 287 believed to host a pair of supermassive black holes.

VLBI observations of the galaxy OJ 287 were performed at four different wavelengths. Observations including the space-borne antenna were carried out at a wavelength of 1.3 cm and amended with additional VLBI observations made with Earth-based telescopes only at wavelengths of 2, 0.7, and 0.3 cm wavelengths. The resulting images reach a record-breaking resolution of about 12 micro arcseconds at 1.3 cm, which is equivalent to being able to discern a 20 cent coin on the surface of the Moon.

The galaxy OJ 287, located at a distance of 5 billion light-years from Earth in the direction of the constellation Cancer, belongs to the class of blazar galaxies which manifest through powerful and variable emission originating in the close vicinity of the supermassive black hole residing in their centers.

The interferometric images at all four wavelengths consistently reveal several knots of emission in a strongly bent plasma jet. The jet bending becomes progressively stronger with increasing angular resolution and towards the jet origin, supporting the hypothesis of a supermassive binary black hole model powering the active galaxy. Analysis of the polarization properties reveals that the magnetic field has predominantly toroidal structure indicating that the innermost radio emitting region is threaded by a helical magnetic field, in agreement with jet formation models. The investigation of spectral properties demonstrates that the jet plasma is composed of electrons and positrons whose kinetic energy is balanced by the magnetic field. Repeated injections of more energetic particles into the jet plasma break this balance and flare up some portions of the inner jet.

OJ 287 is one of the best candidates for a binary supermassive black hole system we know so far in our cosmic neighborhood. The secondary black hole in this system is believed to be on a tight, elliptical orbit passing through the accretion disk of the primary twice every twelve years, producing powerful flares and driving the precession of the rotational axis of the primary black hole.

“One of the main questions related to the evolution of supermassive black holes today is how a pair of so massive black holes could end up merging – the so-called final parsec problem. Theory suggests that separation between the two black holes stops shrinking after they expel all surrounding stars and gas. This is where gravitational radiation comes into the game and causes the two black holes to keep approaching each other until they would ultimately merge,” says Andrei Lobanov from the Max Planck Institute for Radio Astronomy (MPIfR), one of the leading authors of the work. The expected binary supermassive black hole system in OJ287 is so close that it should emit gravitational waves which could soon be detectable with pulsar timing measurements.

A substantial fraction of the energy released by the matter accreted by these black holes is channeled through bipolar jets of relativistic plasma jets which can be observed and studied in detail with VLBI. “The observed detailed fine structure of the inner jet region is ideally suited to the test the validity of the binary black hole model or if the observed jet bending is caused by other effects, such as helical magnetic fields, which are anchored in the rotating space time near the black hole”, adds Thomas Krichbaum, also from the MPIfR.

“These results helped us to move a step forward on broadening our knowledge on the morphology of relativistic jets close to the central engine, confirming the role of magnetic fields in jet launching and record one more time indirect signs of the existence of a proximate super massive black hole binary system deep in the heart of OJ 287”, says Thalia Traianou who is after her doctoral work at MPIfR at the Instituto de Astrofísica de Andalucía (IAA-CSIC) now.

“The objective of reaching the highest resolutions in astronomy has experienced a big step forward with the contribution of the RadioAstron mission and with the developments of millimetre-wavelength VLBI such as the MPIfR-operated Global mm-VLBI Array. Our pioneering work over the last decades is now collecting results, such as our exciting findings in OJ 287”, concludes J. Anton Zensus, director at the MPIfR, member of the RadioAstron International Science Council, and also co-author in the reported work.

The Earth-to-Space Interferometer RadioAstron consisted of a 10-metre orbiting radio telescope (Spektr-R) and a collection of about two dozen of the world’s largest ground-based radio telescopes. When the signals of individual telescopes were combined using the interference of radio waves, this array of telescopes provides a maximum angular resolution equivalent to a radio telescope of 350.000 km in diameter – almost the distance between the Earth and Moon. This made RadioAstron the highest angular resolution instrument in the history of astronomy. The RadioAstron project, active from July 2011 to May 2019, was led by the Astro Space Center of the Lebedev Physical Institute of the Russian Academy of Sciences and the Lavochkin Scientific and Production Association under a contract with the State Space Corporation ROSCOSMOS, in collaboration with partner organizations in Russia and other countries.

The "Global mm-VLBI Array" (GMVA) is an international network of radio observatories interested in performing astronomical VLBI observations at millimeter wavelengths and with open access for the scientific community. The GMVA performs regular, coordinated global VLBI observations in the 3mm/7mm band twice per year. The inclusion of the largest telescopes operating in these bands enhances sensitivity and image fidelity. The GMVA received support from the European Union’s Horizon 2020 research and innovation programme under grant agreement No. 730562.

The already very high angular resolution of Earth-based cm-wave VLBI can be increased further in two ways, either by using longer baselines or by observing at shorter wavelengths. The first approach leads to "space-VLBI" (VLBI with one or more orbiting antennas), the second approach to "millimeter-VLBI" (mm-VLBI). In the more distant future, both techniques may be combined. This will lead to space-VLBI at millimeter wavelengths ("mm-space-VLBI"). Both the RadioAstron and the GMVA data were processed at the MPIfR VLBI Correlator Centre in Bonn. 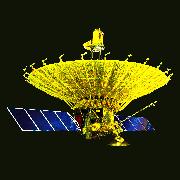 Three radio images of the curved jet in the active galaxy OJ 287 different wavelengths and resolutions 1.3 cm – Radioastron; 3.5 mm – GMVA; 2 cm – VLBA). The upper left image has a record resolution of about 12 µas. 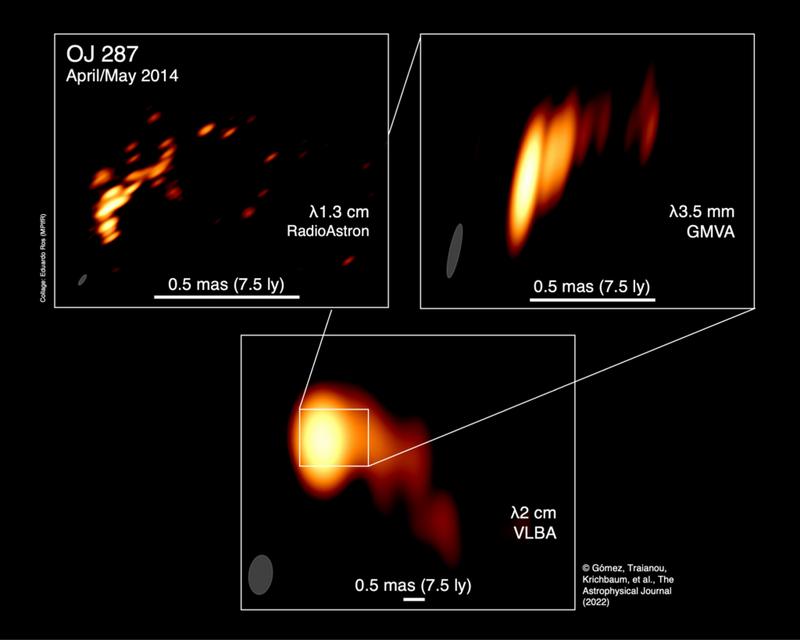 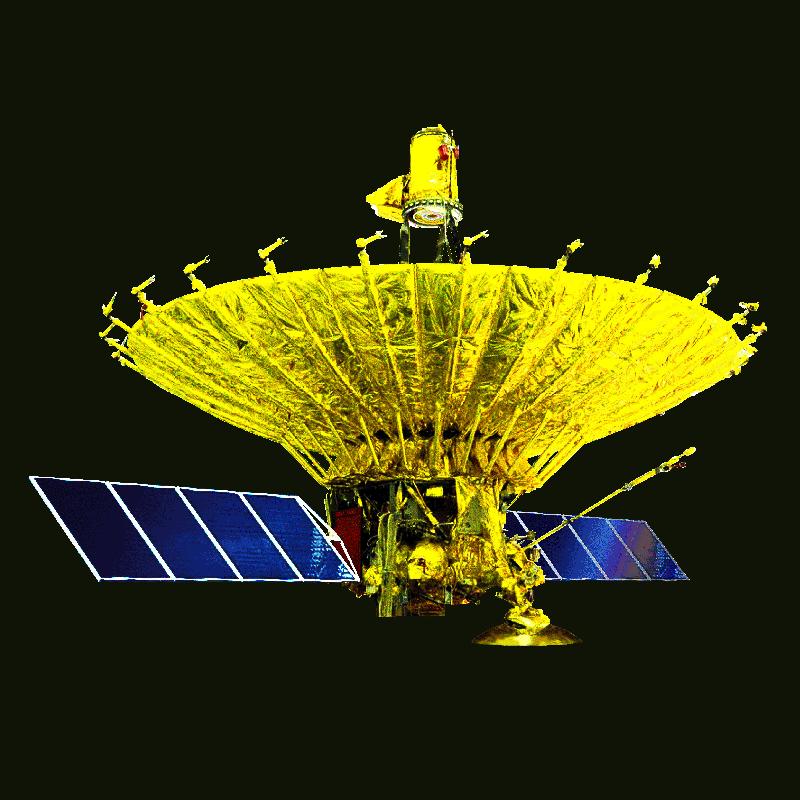