Extensive metagenomic studies provide detailed insights into microbial communities and their ecological functions a team of scientists of the universities of Oldenburg and Göttingen reports.

At first glance, the open ocean seems to be a uniform habitat: Water as far as the eye can see. A research team from the universities of Oldenburg and Göttingen has now been able to show on the basis of extensive data that communities of microbes, so-called prokaryotes, nevertheless differ regionally in the Atlantic Ocean from the Southern Ocean through the tropics to temperate latitudes. According to this, the communities and their functions are genetically particularly well adapted to the respective environment. Similar to regionally different plant communities on land, these different communities exist not only because of ocean currents and environmental conditions, but also due to interactions between the organisms, the researchers argue. The results have been published in the current issue of the journal Nature Communications.

"Our study is the first to examine microbial communities and their ecological functions in different parts of the Atlantic Ocean in such a detailed way," explains Oldenburg microbiologist and team leader Prof. Dr Meinhard Simon. "Only if we know this functional biogeography of the communities better, can we understand how microbes adapt to the environmental conditions in the world's oceans – also in the course of climate change."

Single-celled microorganisms without a cell nucleus, so-called prokaryotes, play a central role in the global cycling of matter: the tiny creatures convert enormous amounts of carbon and other elements - in the oceans even to a greater extent than on land. However, which prokaryotes with which special metabolic capabilities manage this turnover in the different marine regions of an ocean basin has not yet been studied in detail.

In 2012, the research team therefore took samples near the water surface during two expeditions with the research vessel Polarstern along a 13,000-kilometre-long transect from the Southern Ocean to the North Atlantic. In the laboratory, the researchers extracted the DNA, the genetic material, of the microbes and sequenced it. The team thus gained information about how the communities are composed and what functional properties the microbes have - for example, which substances they take up from the water or which nutrient concentrations they are adapted to.

In the next step, the researchers related the results of these metagenomic analyses to the temperatures and nutrient conditions measured in the water and grouped the communities into different clusters of similar samples. When the team considered species composition or metabolic functions, the samples could be grouped into two to three regional clusters that separate the Southern Ocean in particular from the adjacent Atlantic Ocean.

In further investigations, however, the researchers found a more detailed picture: taking different gene variants into account they recognized a total of five clusters. "We were surprised that many of the gene variants studied were only detectable in a temperature range of about 8 degrees Celsius," says Dr Leon Dlugosch, research associate at the University's Institute for Chemistry and Biology of the Marine Environment (ICBM) and lead author of the study. This means that certain species do occur in a fairly large area of the Atlantic Ocean with greater temperature differences and produce similar metabolic outputs there, he explains. "But these subdivide into geographically highly adapted populations or subspecies."

And not only that: "What is particularly astonishing is that about a quarter of the microbial genes found were previously unknown," microbiologist Simon emphasizes. These genes could code for metabolic functions that are not known yet. "There are probably other interesting genomic properties of the prokaryote communities in the world's oceans to be discovered that are important for the global cycling of elements," says the researcher.

The research on which this paper is based took place within the framework of the Transregional Collaborative Research Centre "Roseobacter" funded by the German Research Foundation (DFG). In addition to the Aquatic Microbial Ecology and Marine Sensor Systems research groups of the ICBM at the University of Oldenburg, researchers from the Institute of Microbiology at Göttingen University were involved in the project.

The research vessel Polarstern on the Atlantic Ocean. 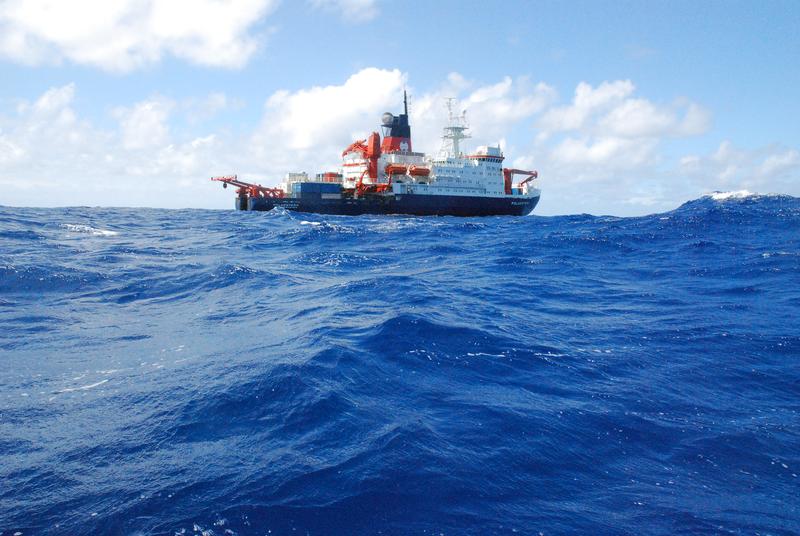