Home > Pressemitteilung: The Early Cooling of our Universe

The Early Cooling of our Universe

Astrophysicists including Axel Weiß/MPIfR, have developed a new method of measuring the cosmic microwave background temperature only 880 million years after the Big Bang. It is the first time that the temperature of the radiation has been measured at such an early epoch. The prevailing cosmological model assumes that the Universe has cooled off since the Big Bang. The model also describes how the cooling process should proceed, but so far it has been directly confirmed only for relatively recent cosmic epochs. The discovery not only sets an early milestone in the development of the cosmic background temperature, but could also have implications for the enigmatic dark energy.

The scientists used the NOEMA (Northern Extended Millimeter Array) observatory in the French Alps, the most powerful radio telescope in the Northern Hemisphere, to observe HFLS3, a galaxy showing a massive burst of star formation in a distance corresponding to an age of only 880 million years after the Big Bang. They discovered a screen of cold water gas that casts a shadow on the cosmic microwave background radiation. The shadow appears because the colder water absorbs the warmer microwave radiation on its path towards Earth, and its darkness reveals the temperature difference. As the temperature of the water can be determined from other observed properties of the starburst, the difference indicates the temperature of the Big Bang’s relic radiation, which at that time was about six times higher than in the Universe today.

“Other than proof for cooling, this discovery also shows us that the Universe in its infancy had some quite specific physical characteristics that no longer exist today”, says lead author Prof. Dominik Riechers from the University of Cologne’s Institute of Astrophysics. “Quite early, about 1.5 billion years after the Big Bang, the cosmic microwave background was already too cold for this effect to be observable. We have therefore a unique observing window that opens up to a very young Universe only”, he continues. In other words, if a galaxy with otherwise identical properties as HFLS3 were to exist today, the water shadow would not be observable because the required contrast in temperatures would no longer be available.

“This important milestone not only confirms the expected cooling trend for a much earlier epoch than has previously been possible, but could also have direct implications for the nature of the elusive dark energy”, says Dr Axel Weiß from the Max Planck Institute for Radio Astronomy (MPIfR) in Bonn, the second author of the study. He further explains: “That is to say, an expanding Universe in which the density of dark energy does not change.” Dark energy is thought to be responsible for the accelerated expansion of the Universe over the past few billion years, but its properties remain poorly understood because it cannot be directly observed with the currently available facilities and instruments. However, its properties influence the evolution of cosmic expansion, and hence the cooling rate of the Universe over cosmic time. Based on this experiment, the properties of dark energy remain – for now - consistent with those of Einstein’s ’cosmological constant’.

Having discovered one such cold water cloud, the team is now setting out to find many more across the sky. Their aim is to map out the cooling of the Big Bang echo within the first 1.5 billion years of cosmic history. ‘This new technique provides important new insights into the evolution of the Universe, including the properties of dark energy, which are very difficult to constrain otherwise at such early epochs,’ Riechers said.

‘Our team is already following this up with NOEMA by studying the surroundings of other galaxies”, says co-author and NOEMA project scientist Dr Roberto Neri. “With the expected improvements in precision from studies of larger samples of water clouds, it remains to be seen if our current, basic understanding of dark energy holds.’

NOEMA, the “NOrthern Extended Millimeter Array”, is the most powerful radio telescope in the Northern Hemisphere. The observatory operates at over 2500 meters above sea level on one of the most extended European high-altitude sites, the Plateau de Bure in the French Alps.

The telescope is operated by the Institut de Radioastronomie Millimétrique (IRAM) and is financed by the Max-Planck Society (Germany), the Centre National de Recherche
Scientifique (France) and the Instituto Geografico Nacional (Spain).

<
The Cosmic Microwave Background (left) and starburst galaxy HFLS3 in a cold water vapour (middle). B ...

The Cosmic Microwave Background (left) and starburst galaxy HFLS3 in a cold water vapour (middle). Because of its low temperature, the water casts a dark shadow on the Microwave background (zoom-in panel on the left). 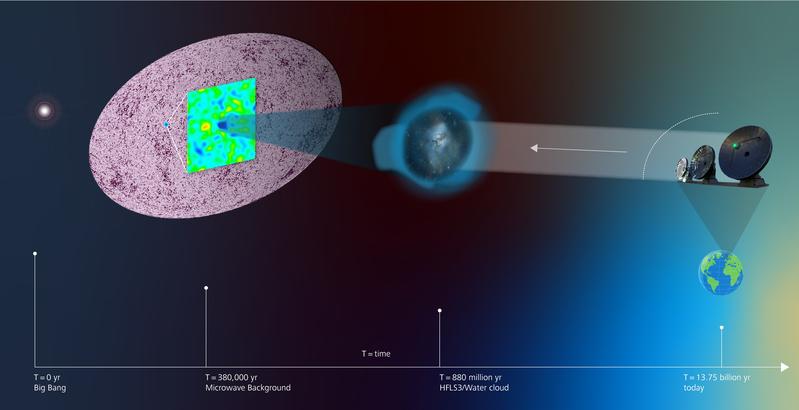 Antennas of the NOEMA observatory in the French Alps (MPG/Germany, CNRS/France, IGN/Spain), used for the observations of starburst galaxy HFLS3. 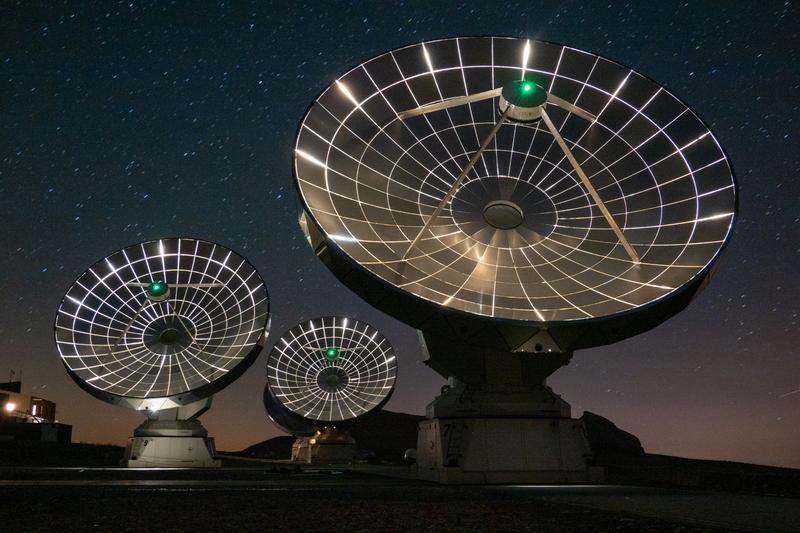