The MATISSE instrument at the European Southern Observatory’s Very Large Telescope Interferometer has observed a cloud of cosmic dust at the centre of the galaxy NGC 1068 (also known as Messier 77 or M77) hiding a supermassive black hole. The findings of an international team of astronomers including scientists from the Max Planck Institute for Radio Astronomy in Bonn, Germany, have confirmed predictions made around 30 years ago and are giving astronomers new insight into the mechanisms of “active galactic nuclei”, some of the brightest and most enigmatic objects in the universe.

Active Galactic Nuclei (AGNs) are extremely energetic sources powered by supermassive black holes and found at the centre of certain galaxies. These black holes are fed by large volumes of cosmic dust and gas. This material spirals towards the black hole and huge amounts of energy are released in the process, often outshining all the stars in the galaxy.

Astronomers have been curious about AGNs ever since they first spotted these bright objects in the 1950s. Now, thanks to the Very Large Telescope Interferometer (VLTI) of the European Southern Observatory (ESO), a team of researchers led by Violeta Gámez Rosas, from Leiden University in the Netherlands, have taken a key step towards understanding how they work and what they look like up close. The results are published today in Nature.

By making extraordinarily detailed observations of the centre of the galaxy NGC 1068 (also known as Messier 77 or M77), at infrared wavelengths in the range of 3 to 12 micrometre, Gámez Rosas and her team detected a thick ring of cosmic dust and gas hiding a supermassive black hole. This discovery provides vital evidence to support a 30-year theory known as the Unified Model of AGNs.

Astronomers know there are different types of AGN. Certain AGNs shine brightly in visible light, while others, like NGC 1068, are more subdued. The Unified Model states that despite their differences, all AGNs have the same basic structure: a supermassive black hole surrounded by a thick ring of dust.

According to this model, any difference in appearance between AGNs results from the orientation at which we view the black hole and its thick ring from Earth. The type of AGN we see depends on how much the ring obscures the black hole from our view point, completely hiding it in some cases.

Astronomers had found some evidence to support the Unified Model before, including spotting warm dust at the centre of NGC 1068. However, doubts remained about whether this dust could fully hide a black hole and, hence explain why this AGN shines less brightly in visible light than others.

“The real nature of the dust clouds and their role in both feeding the black hole and determining how it looks when viewed from Earth have been central questions in AGN studies over the last three decades. While no single result will settle all the questions we have, we have taken a major step in understanding how AGNs work”, says Gámez Rosas. “Our results should lead to a better understanding of the inner workings of AGNs. They could also help us better understand the history of the Milky Way, which harbours a supermassive black hole at its centre that may have been active in the past.”

The observations were made possible thanks to the Multi AperTure mid-Infrared SpectroScopic Experiment (MATISSE) mounted on the VLTI, located on Cerro Paranal in Chile’s Atacama Desert. MATISSE combined infrared light collected by all four 8.2-metre telescopes of ESO’s Very Large Telescope (VLT) using a technique called interferometry. The team used MATISSE to scan the centre of NGC 1068, located 47 million light years away in the constellation Cetus.

“MATISSE can see a broad range of infrared wavelengths, which lets us see through the dust and accurately measure temperatures. Because the VLTI is in fact a Very Large interferometer, we have the resolution to see what’s going on even in galaxies as far away as NGC 1068. The images we obtained detail the changes in temperature and absorption of the dust clouds around the black hole”, says co-author Walter Jaffe, a professor at Leiden University.

Combining the dust temperature changes (from around room temperature to about 1200 oC) caused by the intense radiation from the black hole with the absorption maps, the team built up a detailed picture of the dust and pinpointed where the black hole must lie. The dust — in a thick inner ring with a more extended disc — with the black hole positioned at its centre supports the Unified Model. The team also used data from the Atacama Large Millimeter/submillimeter Array, co-owned by ESO, and the National Radio Astronomy Observatory’s Very Long Baseline Array to construct their picture.

The researchers are now looking to use ESO’s VLTI to find more supporting evidence of the Unified Model of AGNs by considering a larger sample of galaxies.

Team member Bruno Lopez, the MATISSE Principal Investigator at the Observatoire de la Côte d’Azur in Nice, France, says: "NGC 1068 is an important prototype AGN and a wonderful motivation to expand our observing programme and to optimise MATISSE to tackle a wider sample of AGNs."

“Sophisticated data processing methods were developed for the reconstruction of the images, which are the very first high-resolution images of NGC 1068 derived at long infrared wavelengths in the range from 3 to 12 micrometre, where the dust radiation is strongest", explains Karl-Heinz Hofmann from the Max Planck Institute for Radio Astronomy (MPIfR) in Bonn.

“Future observations with the MATISSE instrument with low and additionally high spectral resolution will allow us to study the structure of AGNs at various important wavelengths”, concludes Gerd Weigelt, also from MPIfR. ”Combined with interferometric observations at radio wavelengths and other complementary measurements, the observations will enable the investigation of the inner AGN regions with unprecedented precision and improve our understanding of the physics of AGNs.”

The European Southern Observatory (ESO) was established as an intergovernmental organisation in 1962, today ESO is supported by 16 Member States (Austria, Belgium, the Czech Republic, Denmark, France, Finland, Germany, Ireland, Italy, the Netherlands, Poland, Portugal, Spain, Sweden, Switzerland and the United Kingdom), along with the host state of Chile and with Australia as a Strategic Partner. ESO’s headquarters are located close to Munich in Germany, while the Chilean Atacama Desert hosts the ESO telescopes. ESO operates three observing sites: La Silla, Paranal and Chajnantor. At Paranal, ESO operates the Very Large Telescope (VLT) and its Very Large Telescope Interferometer (VLTI), as well as two survey telescopes, VISTA working in the infrared and the visible-light VLT Survey Telescope. Together with international partners, ESO operates APEX and ALMA on Chajnantor, two facilities that observe the skies in the millimetre and submillimetre range. APEX, the Atacama Pathfinder Experiment, is a collaboration between MPIfR, ESO and the Swedish Onsala observatory (OSO).

The Multi AperTure mid-Infrared SpectroScopic Experiment (MATISSE) for ESO’s VLTI was designed, funded and built in close collaboration with ESO, by a consortium composed of institutes in France (J.-L. Lagrange Laboratory — INSU-CNRS — Côte d’Azur Observatory — University of Nice Sophia-Antipolis), Germany (MPIA, MPIfR and University of Kiel), the Netherlands (NOVA and University of Leiden), and Austria (University of Vienna). The Konkoly Observatory and Cologne University have also provided some support in the manufacture of the instrument. 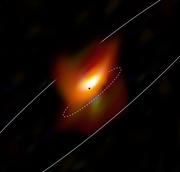 <
Image of the active galactic nucleus of NGC 1068, taken with MATISSE on ESO’s VLTI. The black dot sh ...

Image of active galaxy NGC 1068 with FORS on ESO’s VLT (left) and blow-up view of the inner region of this galaxy, its active galactic nucleus, with the MATISSE instrument on ESO’s VLTI at infrared wavelengths (right). 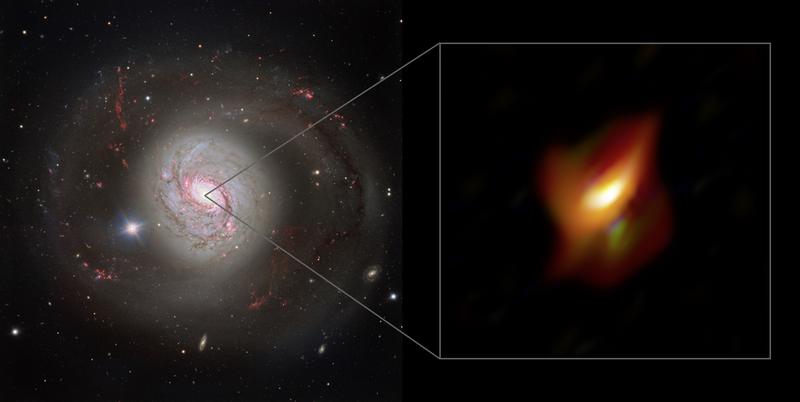 Image of the active galactic nucleus of NGC 1068, taken with MATISSE on ESO’s VLTI. The black dot shows the most probable position of the black hole, while the two ellipses show the thick inner dust ring (dashed) and the extended dust disc. 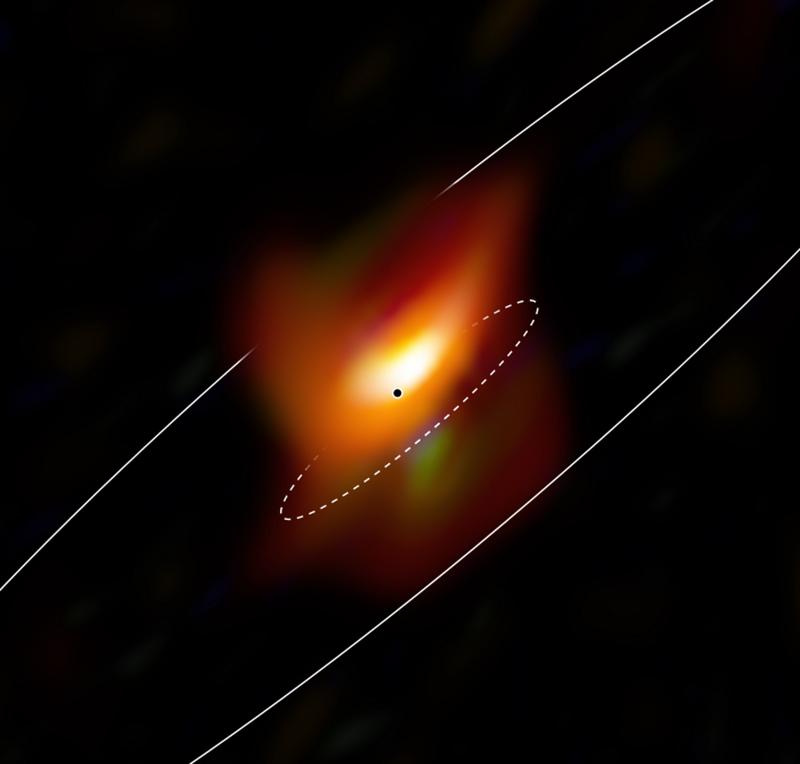