It documents the world's knowledge on the impact of climate change on ecosystems and biodiversity, on people and nature: In February, Working Group II of the Intergovernmental Panel on Climate Change (IPCC) releases its status report – it will be presented on February 28, 2022. The influential body is co-chaired by a man from Bremen: Professor Dr. Hans-Otto Pörtner, a cooperation professor from the Alfred Wegener Institute, Helmholtz Centre for Polar and Marine Research (AWI) and the University of Bremen.

Marktstrasse 3 in the center of Bremen, an unadorned office building not far from the city hall, parliament, and cathedral: Downstairs on the first floor, a chain offers coffee. Upstairs on the fifth floor, climate history is literally being quietly and calmly written. This is the home of the Working Group II of the Intergovernmental Panel on Climate Change. A team of twelve led by marine biologist Hans-Otto Pörtner.

The task of the IPCC is to summarize and evaluate the state of research on climate change and to provide policymakers with a science-based foundation for their decisions. 195 countries are represented by IPCC, an independent institution founded by the United Nations in 1988. Three working groups regularly compile the world's climate knowledge in status reports.

--- “Continuing to trundle along as before is not an option. We are witnesses to the most existential crisis of the planet, of nature, of humanity." ---

It's that time again in February. That's when Working Group II, which Pörtner co-chairs, releases its findings. "Consequences of Climate Change, Vulnerability, and Adaptation" is the title of the main report in the 6th reporting cycle. It deals with the consequences of climate change for ecosystems and biodiversity, with the vulnerability of humans and nature, and with the possibilities and limits of the adaptive capacity of systems. The report also contains projections of how much habitat humans will lose as a result of climate change, for example, or how mortality will increase as a result of global warming.

The draft is still confidential, but one basic message is already clear. "Continuing to trundle along as before is not an option," says Pörtner. "We are witnesses to the most existential crisis of the planet, of nature, of humanity. We still have the power to change things but we must also be prepared to use it. We cannot negotiate with the climate; we must respect the law of nature."

Over a period of three years, the team on Marktstraße has communicated with researchers from around the world, assisting them with scientific, organizational, technical issues, and synthesizing knowledge. Some 280 principal authors are involved in the report – biologists, geologists, environmental physicists, and others from many other disciplines – often the best in their fields. Like Pörtner, they are all volunteers. The result is a report that is expected to be a good 2000 pages long, divided into 18 chapters. They deal with individual regions of the world, with particularly endangered systems such as the tropical rainforests or the Polar Regions, with biodiversity, with oceans, forestry, and food production.

The 30-page political summary of the report will be discussed in February at the week-long plenary meeting of the Intergovernmental Panel on Climate Change with around 500 government representatives. "As co-chairs, we have the task of coordinating and leading this process," says Pörtner, who shares the task with South African Debra Roberts.

The co-chairs are then called upon less as researchers and rather as diplomats, as mediators - and as people with a gavel. The draft is debated word by word, line by line. "You wouldn't believe the requests that can come in," the 66-year-old says with a slight groan. Once agreement is reached on wording, he lets the gavel come down much like at an auction. Then the yellow lettering for disputed wording changes to green.

The report is a consensus product, of course. It is jointly released by science and governments, and feeds into their actions. "We have direct access to governments and can feed information directly into the policy process. That is the great advantage of the Intergovernmental Panel on Climate Change," says Pörtner. Politicians do not have a veto right, he adds. "Science has the final say. The wishes of governments can never go so far as to change scientific statements."

Pörtner has long been involved with the IPCC. First as an author, later as lead author for the chapter on ocean systems. When he was asked in 2015 whether he wanted to stand for election as co-chair, he didn't hesitate for long. After Professor Dr. Ottmar Edenhofer of the Potsdam Institute for Climate Impact Research, he is only the second German to head a working group.

This is not only a distinction for him as a scientist and person, but also for AWI as well as for the science location Bremen and the U Bremen Research Alliance as a whole. The biologist came to Bremen State in 1995, where he took over the leadership of the research group for Integrative Ecophysiology at AWI. Although there was no shortage of requests from other science locations, he stayed in Bremen. "We have built up research opportunities at AWI over the years that cannot be found everywhere," says Pörtner.

Another factor in his staying is the close exchange of science in the Bremen State. As a cooperating professor, Pörtner works for two member institutions of the U Bremen Research Alliance at once: AWI and the University of Bremen, where he teaches and supervises doctoral students. "Good science only works together, across discipline and institution boundaries. The alliance is a very good example of that."

The focus of his research is the ocean as a natural environment and the effects of climate change on marine life. Three key factors are driving the changes: rising temperatures, increasing oxygen depletion, and acidification due to increasing uptake of carbon dioxide. "Animals are specialized to a limited temperature window. Antarctic fish die a heat death at three degrees Celsius," he says. One consequence of warming is species migration. Interactions between species are changing and new ecosystems are emerging. "How do they function? That's one of many questions I want to answer."

--- "Good science only works together, across discipline and institution boundaries. The alliance is a very good example of that." ---

Within the Intergovernmental Panel on Climate Change, Pörtner works with colleagues from a wide range of disciplines. He is concerned not only with scientific issues, but also with the social and economic consequences of the climate crisis, for example in fishing. "You have to see the interdisciplinary connections and beyond your own discipline," says Pörtner, describing one requirement of his work. In the summer of 2021, for example, he and the World Biodiversity Council presented a study that for the first time addressed the triad of emission protection, sustainable species conservation, and social justice. "The fact that we highlighted this connection and underscored it with facts – I'm proud of that." He is no less proud to have helped anchor the oceans in the United Nations climate negotiations. "This is a great success for ocean science."

So far, Pörtner has shared responsibility for three special reports of the IPCC’s 6th reporting cycle. They focused on global warming of 1.5 degrees, on land systems, on oceans, and the cryosphere – the Earth's frozen systems. What effect on the climate does he hope the report will have? "That we manage to limit global warming to 1.5 degrees Celsius. We are in the ten crucial years of climate policy. If we don't turn things around now, the climate may run away from us."

Another report is due this year, which will summarize the results of the three working groups of the Intergovernmental Panel on Climate Change. This will be followed in November by the UN Climate Change Conference in Egypt. Pörtner’s role will end in 2023. But climate change continues to advance, and with it the reporting system. Is the 1.5 degree target still achievable? Pörtner is cautiously optimistic. "Yes," he says, but the emphasis is clearly on "still." And then comes the but: "We have to be ready for a profound transformation, and we have to do it now. What needs to be done is well known."

Twice per year, the Impact science magazine provides an exciting insight into the effects of cooperative research in Bremen. "Addressing the Climate Crisis: Bremens Part of IPCC" was published in issue 5 (January 2022).

He calls for action: Prof. Dr. Hans-Otto Pörtner, marine biologist at AWI and University of Bremen. 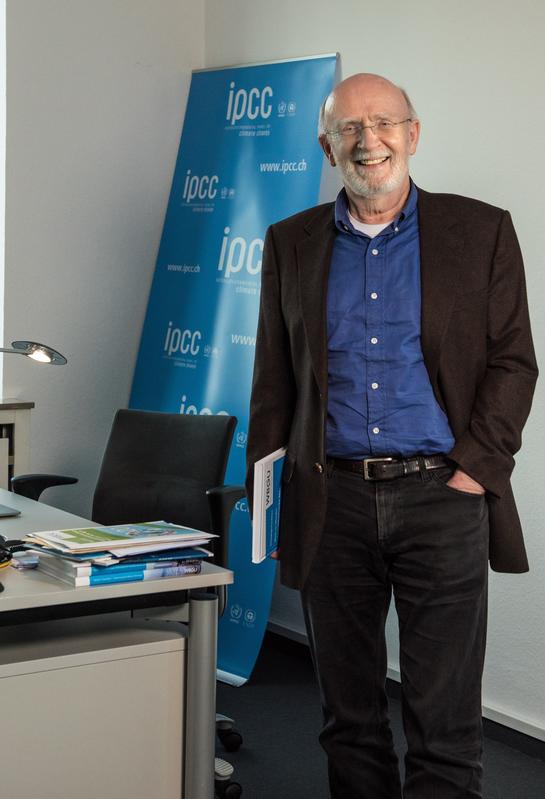