Living organisms produce an abundance of small molecular compounds, called metabolites. Although, it is clear that small molecules are central to all aspect of life, their exact functionalities are often unknown. To fill this knowledge gap, and because small molecules act by binding with proteins, Aleksandra Skirycz's group at the Max Planck Institute of Molecular Plant Physiology developed a novel strategy to identify such protein-molecule complexes. An important group of small molecules identified by this novel strategy are 2',3'-cAMP nucleotides, which are products of RNA degradation and appear to play an important role in the regulation of stress responses.

When conditions are unfavorable, living beings - whether bacteria, plants, animals or humans - react with stress. Chronic stress in humans leads to negative effects on metabolism, the immune and cardiovascular systems, and impairs sleep regulation, learning, memory and attention processes. Plants are considered stressed when there is an impairment of plant growth or reproductive ability. In them, stress is often caused by drought, heat, frost, salinized soils or nutrient deficiencies, among other things. This is reason enough to investigate in more detail which processes take place inside living organisms during stress and which processes are decisive. In the future, this knowledge could help plants to cope better with stress, which would have a positive effect on plant quality and yields in crops. It has already been shown in the past that stress leads to an accumulation of 2',3'-cyclic nucleotides (small RNA molecules). This has not been given much attention so far because 2',3'-cyclic nucleotides are an intermediate product of RNA degradation that has not been attributed any function.

Monika Chodasiewicz, until recently a postdoc at MPI-MP in Potsdam-Golm in the research group of Aleksandra Skirycz, now a professor at the King Abdullah University (KAUS) in Saudi Arabia, explains, "Since our research results from 2018, which already indicated that 2',3'-cAMP might have a regulatory function in the formation of stress granules (SG), we were sure that there must be more to it than that." Stress granules are dense accumulations of proteins and RNAs in the cytosol that form when the cell is under stress. The two scientists have since suspected that 2',3'-cAMP might serve as a signalling molecule to trigger molecular changes in response to stress. Indeed, in the work now presented, using an omic approach in combination with cell biology, they were able to demonstrate that the addition of 2',3'-cAMP triggers a cellular response that mimics the response to stress. Administration of 2',3'-cAMP induced changes in their experimental plants at the level of the transcriptome (RNA molecules), proteome (proteins), and metabolome (constituent composition). The observed changes correspond to the responses that occur during stress. In addition, 2',3'-cAMP affects the so-called processing bodies, which are microscopic, demarcated structures in the cell consisting of enzymes that play an important role in mRNA degradation.

Dr. Skiycz, currently a professor at Boyce Thompson Institute and Cornell University, explains, "Our work is another important indication that many of the most important small-molecule regulators are chemically simple and evolutionarily ancient compounds. Because they come across as rather inconspicuous, they could also be called the Cinderellas of chemical biology." Small molecules offer unique opportunities for drug and agrochemical development based on their signalling and regulatory functions. Therefore, the present research findings could lead to innovations in the field of cyclic nucleotides aimed at altering and, in the best case, improving plant health and plant responses to environmental stimuli. "Our discoveries open a new dimension for research and provide new opportunities for the study of previously undiscovered signalling pathways," comments Dr. Chodasiewicz on the research findings of the group. 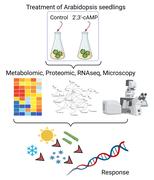 <
Schematic representation of the effects of 2',3'-cAMP treatment in A. thaliana at the transcriptomic ...

<
Schematic representation of the effects of 2',3'-cAMP treatment in A. thaliana at the transcriptomic ...

Schematic representation of the effects of 2',3'-cAMP treatment in A. thaliana at the transcriptomics, proteomics and metabolomics levels. 2', 3'-cAMP was shown to induce the same changes in the plant as abiotic stresses. 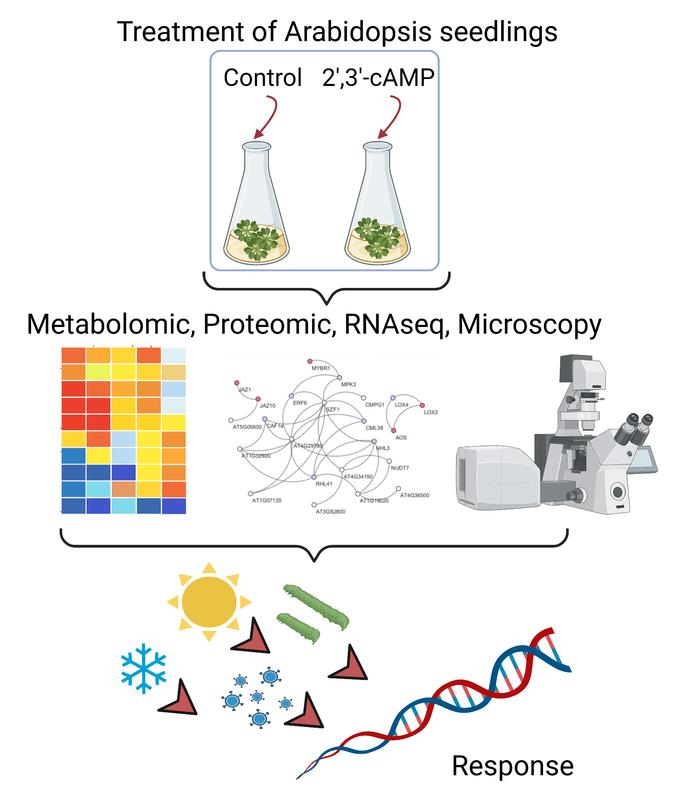