An international research team led by Queen Mary University of and Dr. Eckart Stolle from the Leibniz-Institute for the Analysis of Biodiversity Change (LIB) has discovered that a new form of ant society spread across species. They found that after the new form of social organization evolved in one species of fire ants, a "social supergene" carrying the genetic information for the new social form, spread into other species. This spread occurred through hybridisation, i.e., breeding between ants of different species. The alternate way of life provides the ants with an evolutionary advantage and makes them more successful than with just the original social form.

Red fire ants originally had only colonies with one queen. About one million years ago, a new social form evolved where colonies could have dozens of queens. A particular version of a large section of chromosome, named the "social supergene", includes the genetic information necessary to make workers accept more than one queen. The new research, published today in Nature Communications, analysed the entire genomes or instruction sets of 365 male fire ants to examine the evolution of the social supergene, and found that the same version of this chromosome is present in multiple fire ant species.

Transfer of large amounts of genetic information across species is rare because of genetic incompatibilities. However, in this case, the advantages of having multiple queens overrode the incompatibilities, and the genetic material repeatedly spread to other species from the one source species in which this new social form evolved. “The multiple-queen social form has advantages in several situations. For example, a multiple-queen colony has more workers and thus can outcompete a colony with only one queen. Furthermore, if there is a flood, a colony with multiple queens is less likely to become queenless”, explains Dr. Eckart Stolle, section leader of Comparative Insect Genomics at the LIB, Museum Koenig Bonn.

Dr. Yannick Wurm, Reader in Evolutionary Genomics and Bioinformatics at Queen Mary University of London and Fellow of the Alan Turing Institute, elaborates, "This research reveals how evolutionary innovations can spread across species. It also shows how evolution works at the level of DNA and chromosomes. It was incredibly surprising to discover that other species could acquire a new form of social organisation through hybridisation. The supergene region that creates multi-queen colonies is a large piece of chromosome that contains hundreds of genes. The many parts of a genome evolve to work together in fine-tuned manners, thus suddenly having a mix with different versions of many genes from another species is complicated and quite rare.”

Rodrigo Pracana, co-first author of the study together with Eckart Stolle, also from Queen Mary University of London, adds: "Our study shows how detailed analysis of large numbers of wild animals can provide surprising new insight on how evolution works.”

About the Leibniz-Association
The Leibniz Association combines 96 independent research institutes. Their focus ranges from the natural, engineering, and environmental sciences to the humanities and the business, space, and social sciences. The Leibniz institutes focus on relevant social, economic, and ecological issues. They perform knowledge-oriented and applied research (also among the cross-disciplinary Leibniz research alliances), are or support scientific infrastructures, and offer research-based services. 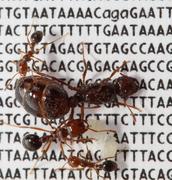 Solenopsis invicta fire ant queen (large), three workers (smaller), one pupa (whiteish) on a subset of the DNA sequence of their social chromosome. 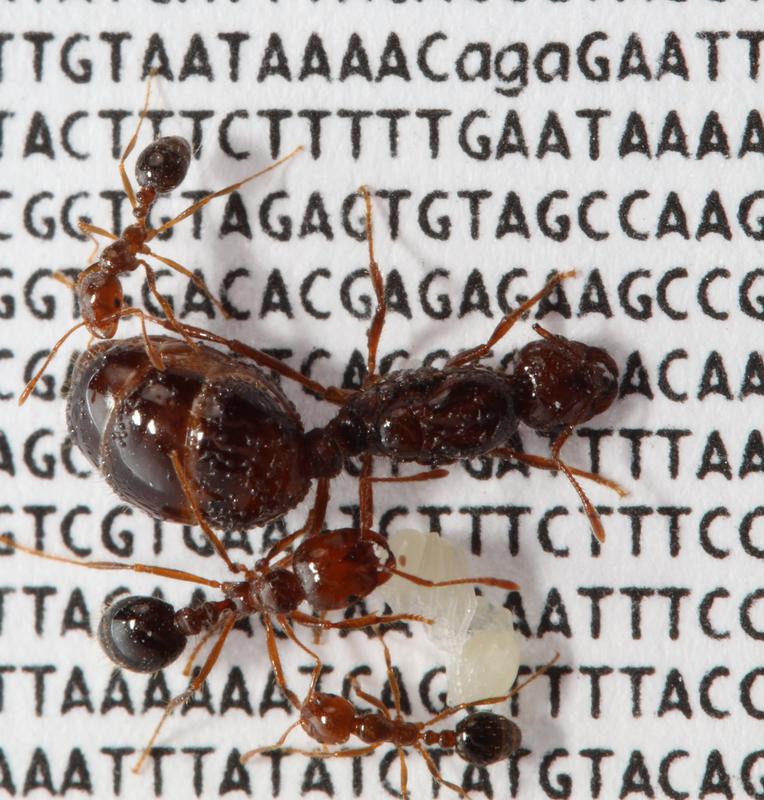