Prof. Dr Eva Grebel, an astrophysicist at Heidelberg University, is the first winner of the Caroline Herschel Medal, a new joint award from the Royal Astronomical Society and the German Astronomical Society (Astronomische Gesellschaft, AG), launched last year by the UK Government in honour of former German Chancellor Angela Merkel. Prof. Dr Grebel wins the medal in recognition of her outstanding contribution to understanding the evolution of galaxies and galactic archaeology.

Caroline Herschel was a distinguished astronomer working in the late eighteenth and the first half of the nineteenth century. Born in Hanover in Germany, she moved to the UK with her brother William, who was the first president of the RAS in 1820, discovered eight comets, revised and greatly improved catalogues of stars, and of clusters and nebulae. The new medal recognises her legacy, and the deep and enduring scientific links between Germany and the UK. It will be awarded to outstanding women astronomers, alternating between the two countries in each successive year.

Prof. Dr Grebel studied physics and astronomy at the University of Bonn, moving to the European Southern Observatory in 1992, before taking up posts in US and Swiss universities, and returning to Germany in 2007 as a full professor at Heidelberg University and director of the Astronomisches Rechen-Institut.

In her career Prof. Dr Grebel has led research into galaxy evolution, and she pioneered the field of “near-field cosmology”, where studying the evolutionary histories of nearby galaxies is used as a tool to understand the universe as a whole. She and her group discovered a new class of galaxies, known as “ultra-faint dwarf galaxies”, and by studying these and dwarf galaxies in orbit around the Andromeda Galaxy, accrued evidence for the role of unseen “dark matter” in galaxy formation. In a different area of research, she pioneered the use of pulsating variable stars (where their brightness changes periodically) to understand the three-dimensional structure of our galaxy, the Milky Way, and its neighbours.

Prof. Dr Grebel is described as a true role model, mentor, and leader, inspiring students and young scientists alike, and is an ideal recipient of the first Caroline Herschel Medal.

AG President Prof. Michael Kramer said: “Eva Grebel is one of the absolute top researchers in her field. Like once Caroline Herschel, with much passion and great enthusiasm for astronomy, she knows how to use sophisticated observations for new discoveries. With great strength and skill, Eva Grebel achieved ground-breaking results, and promoted and inspired scientists across generations and nations to explore the heavens.”

RAS President Prof. Emma Bunce said: “We are delighted that Prof. Dr Eva Grebel has been awarded the first Caroline Herschel Medal. The new joint medal provides a fantastic opportunity to recognise outstanding contributions by women in astrophysics both in the UK and in Germany, and to celebrate the longstanding research cooperation between our two nations.”

UK Minister for Science, Research and Innovation George Freeman, said “The UK and Germany enjoy deep and time-honoured research ties, which we will continue to build on to address the global challenges of our time. Supported by the UK Government, the Caroline Herschel Medal recognises outstanding researchers in our two countries, and highlights the prized contributions of women to the field of science – in this case astrophysics. I wholeheartedly congratulate Prof. Eva Grebel as the first recipient of this prestigious award.”

Professor Carole Mundell, the chair of the awards panel who selected Prof. Dr Grebel, said: “In an exceptionally strong field of nominees, Professor Grebel stood out. The panel were impressed by her achievements in international astrophysics, the major advancements she has driven through her scientific discoveries, the range of contributions she has made to the universities in which she has held major leadership and management roles, and her wider stewardship of our field. She is an outstanding role model and a worthy inaugural winner of the 2022 Caroline Herschel Medal.”

Her Majesty's Ambassador to Germany Jill Gallard said: “It is wonderful to see such a talented researcher as Prof. Dr Eva Grebel receiving the first Caroline Herschel Medal, which was launched by Prime Minister Johnson in honour of Former Chancellor Angela Merkel on her visit to the UK last summer. This prize celebrates research excellence and science collaboration between the UK and Germany, and we hope that the example of brilliant scientists such as Prof. Eva Grebel will inspire further women to pursue careers in STEM subjects.”

Prof. Dr Grebel will receive the Medal at the AG annual meeting, to be held in Bremen in September. In 2023 it will be the turn of a woman astronomer in the UK to receive the Medal, and nominations for this will open later this year.

The Caroline Herschel medal celebrates talented German and British women in astronomy. Prof. Dr Eva Grebel’s pioneering contribution to understanding the evolution of galaxies serves as an inspiration for women to pursue exciting and rewarding careers in science. The UK government is committed to attracting and retaining women in STEM. The medal was launched in summer 2021 in honour of Chancellor Merkel during her visit to the UK, and this will be the first time the medal has been awarded. It is funded by the Department of Business, Energy and Industrial Strategy (BEIS), supported by the British Embassy in Germany and administered by the Royal Astronomical Society and the German Astronomical Society.

The Royal Astronomical Society (RAS), founded in 1820, encourages and promotes the study of astronomy, solar-system science, geophysics and closely related branches of science. The RAS organises scientific meetings, publishes international research and review journals, recognises outstanding achievements by the award of medals and prizes, maintains an extensive library, supports education through grants and outreach activities and represents UK astronomy nationally and internationally. Its more than 4,000 members (Fellows), a third based overseas, include scientific researchers in universities, observatories and laboratories as well as historians of astronomy and others.
The RAS accepts papers for its journals based on the principle of peer review, in which fellow experts on the editorial boards accept the paper as worth considering. The Society issues press releases based on a similar principle, but the organisations and scientists concerned have overall responsibility for their content.

The German Astronomical Society (Astronomische Gesellschaft, or AG for short), founded in 1863, is the German national professional association for astronomy and astrophysics. The AG promotes activities in science and research, strengthens exchange between its members and supports the dissemination of science to the public and in education. On the international level, the AG represents the German astronomical scientific community in the European Astronomical Society (EAS) and the International Astronomical Union (IAU). The Council of German Observatories is a central body of the AG, acting as the science policy committee, and representing the common interests of all German astronomical institutions vis-à-vis funding agencies, governments, international organisations and other relevant boards and committees. 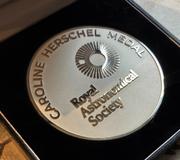 <
Image of the Caroline Herschel Medal 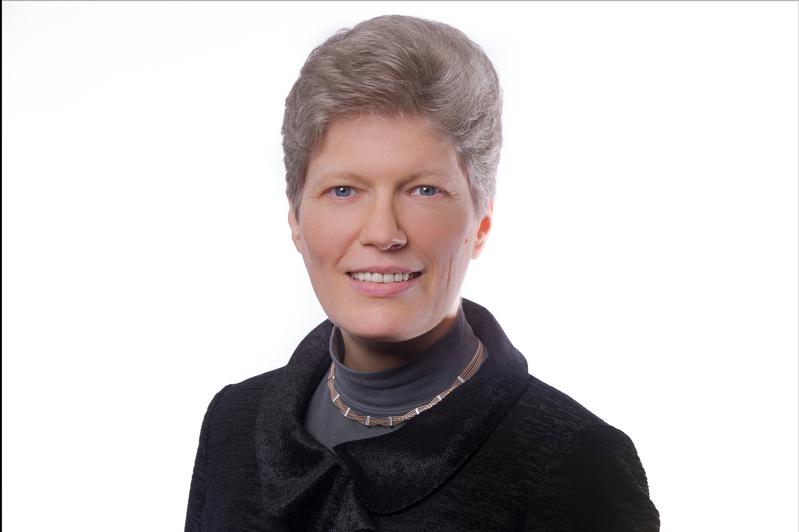 Image of the Caroline Herschel Medal 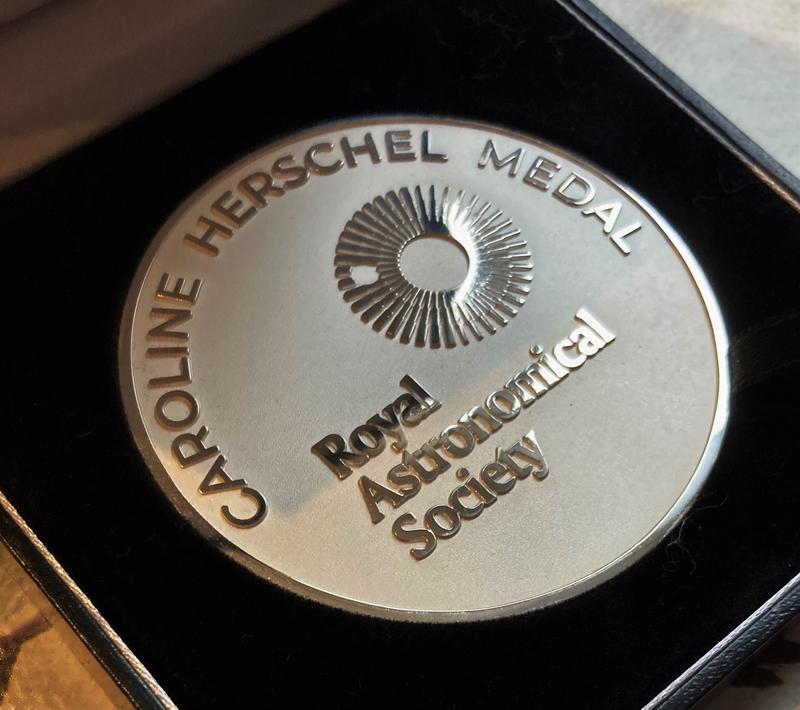