The entire genomic material of a cell must be packed into a tiny cell nucleus in such a way, that on the one hand, it can be stored in an organized manner and, on the other hand, it can be transcribed, duplicated or repaired as needed. Different proteins are responsible for space-saving packaging, which can roll up or loop the DNA. Scientists Kikuë Tachibana and Karl Duderstadt from the Max Planck Institute of Biochemistry in Martinsried are investigating the exact task and function of these molecular machines. They discovered that the MCM complex plays an important role in restricting DNA loop formation and thus in the three-dimensional structure of the genome and in gene regulation.

A DNA molecule is about two meters long and still has to be packed into a tiny cell nucleus. A cell nucleus is about the size of a toner particle from a printer or a fine dust particle. How does it work? How can the genetic information be stored and packaged on the one hand, but read on the other? How is it put into loops? Packaging and unpacking are also dynamic processes that must run quickly and smoothly.

Now Kikuë Tachibana, new director of the department “Totipotency” at MPIB, and her team discovered that a protein complex well known for its function in DNA replication has an unexpected role in genome folding. “During a symposium at MPIB, it emerged that my new colleague Karl Duderstadt and I shared a common interest. We decided to join forces to use complementary approaches to investigate these initial observations at a mechanistic level”. Karl Duderstadt is head of the research group "Structure and Dynamics of Molecular Machines".

DNA loop formation
In the process of DNA loop formation, also called loop extrusion, three proteins or protein complexes are mainly involved: first cohesin, second the zinc finger protein CTCF, and third the MCM complex. Cohesin binds to DNA and initiates the formation of a loop. Cohesin coils the DNA and this results in the progressive growth of a loop. Loop extrusion stops when cohesin encounters the DNA-bound protein CTCF, which was the only known loop extrusion barrier prior to this work.

In this current study, the scientists have now jointly identified the minichromosome maintenance (MCM) complex as a new class of barriers in the formation of DNA loops. “Although the details differ, one can imagine that it is a little like placing a ring on a ribbon and threading the ribbon through the ring, which remains at the base of the loop”, says Matthias Scherr, co-first author of the study.

Kikuë Tachibana explains: “Unlike CTCF, which is a vertebrate-specific barrier, MCMs are conserved across eukaryotes and archaea. It is therefore fascinating to consider that this might be an ancestral barrier to loop extrusion.” The work raises the possibility that the encounters of loop extruding cohesin complexes with MCM complexes are part of a fundamental mechanism that organizes the genome folding of a wide variety of organisms.

Karl Duderstadt summarizes, "Our discovery was only possible through the formation of an amazing international team with expertise in a broad range of areas. This work is a testiment to what is possible when you build bridges between fields. I am convinced many more surprises are in store for us as we explore deeper into the network of interactions that control chromosome organization."

<
For efficient packaging, DNA is placed in loops. The cohesin ring (pink) forms the basis for the loo ...
Illustration: Monika Krause
© MPI of Biochemistry

<
For efficient packaging, DNA is placed in loops. The cohesin ring (pink) forms the basis for the loo ...
Illustration: Monika Krause
© MPI of Biochemistry

For efficient packaging, DNA is placed in loops. The cohesin ring (pink) forms the basis for the loop. The protein complex MCM (yellow) limits the loop formation. 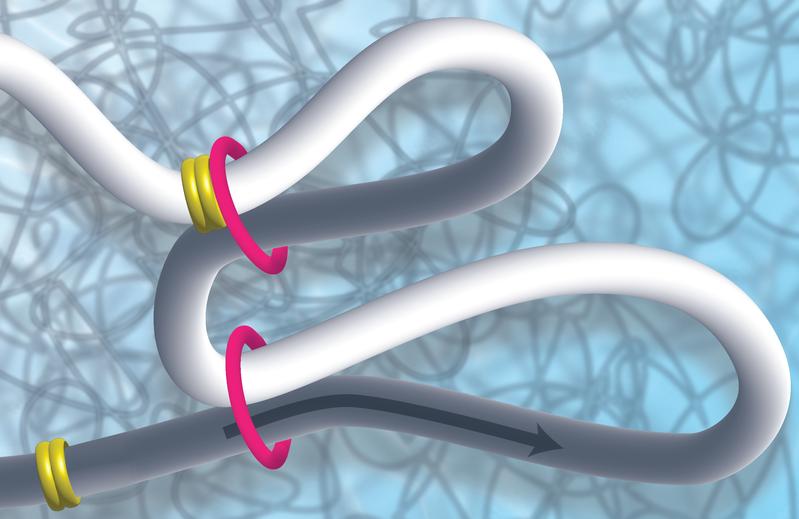