The chronic nutritional and metabolic disease of obesity is characterized by an excessive increase in body fat and its accumulation in tissues. Those who suffer from obesity also have an increased risk of concomitant or secondary diseases such as type 2 diabetes, fatty liver disease, and atherosclerosis. Researchers at the European Research Institute for the Biology of Ageing (ERIBA) in Groningen, the Netherlands, and the Leibniz Institute on Aging - Fritz Lipmann Institute (FLI) in Jena, Germany, have now demonstrated for the first time in a mouse model how the transcription factor C/EBPβ can positively influence fat storage and maintain health even under a particularly high-fat diet.

Jena/Groningen. In recent years, the number of overweight and obese people in industrialized nations has increased sharply. In Germany, for example, one in two people is now overweight, and about 20% of the population is obese. Obesity is defined as excessive body weight caused by an extremely high proportion of fat, usually due to an accumulation of fat in greatly enlarged (hypertrophic) fat cells (adipocytes) in the abdomen. This so-called visceral fat leads to inflammation, which plays a critical role in the development and progression of various metabolic disorders, including type 2 diabetes, heart disease, stroke, and certain cancers. For this reason, the global increase in the prevalence of obesity is a growing public health concern, and links between obesity and health problems are being intensively investigated.

In a recent study published in the renowned journal eLife, researchers at the European Research Institute for the Biology of Ageing (ERIBA) in Groningen, the Netherlands, and the Leibniz Institute on Aging - Fritz Lipmann Institute (FLI) in Jena, Germany, have now demonstrated that genetically modified mice with an increased function of the transcription factor C/EBPβ can store excess fat in such a way that they remain healthy even under stressful conditions, such as a markedly high-fat diet.

Fat storage in the visceral fat depot occurs mainly through the increase in size of individual fat cells (hypertrophic fat storage). However, when these cells reach their maximum storage capacity, continued fat intake begins to accumulate detrimentally in tissues outside the fat depots (steatosis), particularly in the liver and muscles, resulting in impaired function of these tissues. “However, there is a subgroup of people who, despite being obese over a long period of time, do not experience any noticeable health problems,” reports Prof. Cornelis Calkhoven, a former research group leader at the FLI who is now working at ERIBA.

Previous studies have demonstrated that two things in particular contribute to this healthy obese phenotype: First, fat that is stored not in the abdomen but as subcutaneous fat under the skin of the arms, thighs, and back is better for health. Furthermore, fat that is stored in so-called hyperplastic adipose tissue, which is formed by an increase in the number of fat cells (hyperplastic fat storage), is also much less likely to cause harm. Because more cells are available for fat storage, they remain smaller and are thus metabolically healthier and less inflamed. “However, our knowledge of the genetic factors that regulate the aforementioned favorable conditions of fat storage is still very limited and requires more detailed studies,” adds Prof. Calkhoven.

When mice are fed a high-fat diet in the laboratory, within a short time they gain weight, become obese, and develop metabolic problems similar to those of obese humans, including inflammation of the adipose tissue, fat accumulation in normally fat-free tissues such as the liver and muscles, and type 2 diabetes.

“In our current study, we were able to show on the one hand that genetically modified mice with increased function of the transcription factor C/EBPβ store excess fat primarily in hyperplastic adipose tissue with more and smaller fat cells,” reports Dr. Christine Müller from ERIBA. Even on extremely high-fat diets, these C/EBPβ-superfunction mice exhibit less inflammation of adipose tissue, do not accumulate fat in the liver or heart, and maintain healthy glucose metabolism. On the other hand, in males, C/EBPβ superfunction also stimulates favorable storage of fat in depots under the skin. “Both are factors that contribute to a healthy obese phenotype in humans,” Dr. Müller said.

In two previously published studies, the researchers from Jena and Groningen have already demonstrated that the same C/EBPβ-superfunction mice, on a normal diet, have a generally improved metabolism, which is also associated with less cancer and a pronounced delay in several aging-related diseases compared to their wild-type littermates.

Will we soon be able to control the storage of excess fat?

“Our studies provide impressive evidence that C/EBPβ superfunction tailors the physiology of mice toward a healthier metabolism, even under unhealthy nutritional conditions, such as when stressed by a high-fat diet,” explained Prof. Calkhoven, summarizing the findings. “The current study identifies the transcription factor C/EBPβ as a key regulator of healthy fat storage, but at the same time raises the question of whether pharmacological induction of C/EBPβ superfunction can potentially be used to redirect storage of excess fat from the harmful hypertrophic mode to the more beneficial hyperplastic mode. This would have immense implications for metabolic health and aging.”

Initial studies have already shown that such a pharmacological C/EBPβ targeting strategy is feasible in principle. The development of such drugs would thus have enormous implications for the treatment of obesity and related metabolic diseases.

Dutch European Research Institute for the Biology of Ageing (ERIBA) was founded by the University Medical Center Groningen (UMCG) in 2013. ERIBA is an internationally orientated research institute focusing on fundamental biological problems related to aging and age-associated diseases. See http://eriba.umcg.nl for more information. 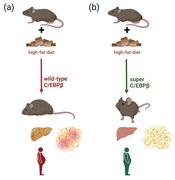 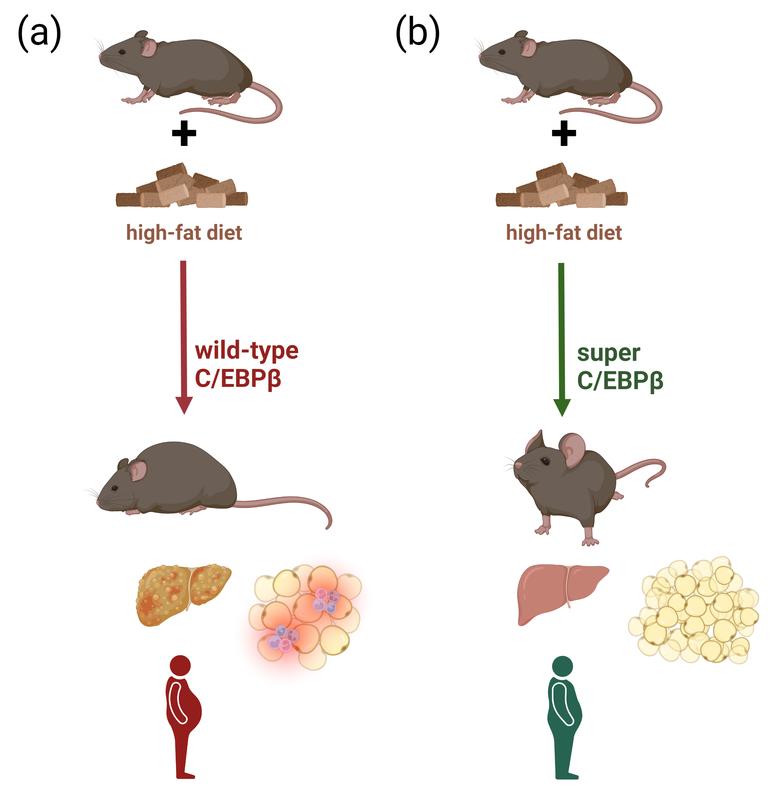