Learning from Nature: Biosynthesis of cyanobacterin opens up new class of natural compounds for applications in medicin

Researchers in the groups of Prof. Tobias Gulder from TU Dresden and Prof. Tanja Gulder from Leipzig University have succeeded in understanding the biosynthetic mechanisms for the production of the natural product cyanobacterin, which in Nature is produced in small quantities by the cyanobacteria Scytonema hofmanni. In the process, they also discovered a new class of enzymes for building carbon-carbon bonds. The (bio)chemists are thus significantly expanding the biocatalytic repertoire currently known from Nature and are opening up new, sustainable biotechnological applications in medicine and agriculture.

The results of the collaboration have now been published in the renowned journal Nature Chemical Biology.

The fact that Nature is an excellent chemist is demonstrated by the abundance of molecules, so-called natural products, which it produces biosynthetically. These natural products are also of central importance to us humans. They are used in many ways in our everyday lives, especially as active agents in medicine and agriculture. Prominent examples are antibiotics such as penicilins isolated from molds, the anti-cancer drug Taxol from the Pacific yew tree, and pyrethrins found in chrysanthemums, which are used to combat pest infestations. The knowledge and understanding of the biosynthetic assembly of such compounds by Nature is essential for the development and production of drugs based on such compounds. In this context, researchers from the groups of Prof. Tobias Gulder (TU Dresden) and Prof. Tanja Gulder (Leipzig University) jointly investigated the biosynthesis of cyanobacterin, which is highly toxic to photosynthetic organisms and is produced in small quantities in Nature by the cyanobacterium Scytonema hofmanni. In their work, the (bio)chemists were not only able to elucidate the biosynthesis of the natural product for the first time, but also discovered a novel enzymatic transformation for the formation of carbon-carbon bonds.

This work was made possible by combining modern tools from bioinformatics, synthetic biology, enzymology and (bio)chemical analytics. The focus was on how the central part of the cyanobacterin carbon skeleton is produced. The putative genes for this were first cloned by the method of "Direct Pathway Cloning" (DiPaC) and then activated in the model organism E. coli as a cell factory. DiPaC is a new synthetic biology method previously developed in the laboratory of Tobias Gulder, Professor of Technical Biochemistry at TU Dresden. "DiPaC allows us to transfer entire natural products biosynthetic pathways into recombinant host systems very quickly and efficiently," Tobias Gulder explains. In the next step, the research team analyzed the essential individual steps of cyanobacterin biosynthesis by additionally producing all key enzymes in the host organism E.coli, isolating them and then investigating the function of each enzyme. In the process, they came across a previously unknown class of enzymes called furanolide synthases. These are capable of catalyzing the formation of carbon-carbon bonds following an unusual mechanism. In further studies of these furanolide synthases, these enzymes proved to be efficient in vitro biocatalysts, making them highly attractive for biotechnological applications.

"With the furanolide synthases, we have obtained an enzymatic tool that will allow us to develop more environmentally friendly methods for the production of bioactive compounds in the future and thus make significant contributions to a more sustainable chemistry," explains Prof. Tanja Gulder from the Institute of Organic Chemistry at Leipzig University. Next, the two research teams want to specifically search for these novel biocatalysts in other organisms as well, and thus find new bioactive members of this natural products class, as well as develop methods for the biotechnological production and structural diversification of cyanobacterin. "Our work paves the way for the comprehensive development of an exciting class of natural products for applications in medicine and agriculture," the two scientists agree.

<
Fermentation of cyanobacteria in a photobioreactor at TU Dresden

Fermentation of cyanobacteria in a photobioreactor at TU Dresden 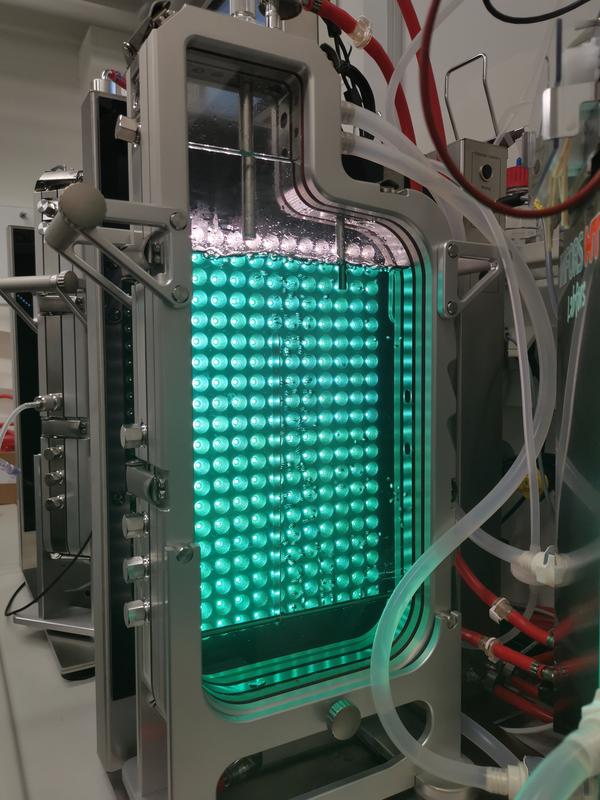