Home > Pressemitteilung: The “fuel of evolution” is more ...

Darwinian evolution is the process by which natural selection promotes genetic changes in traits that favour survival and reproduction of individuals. How fast evolution happens depends crucially on the abundance of its “fuel”: how much genetic difference there is in the ability to survive and reproduce. New research by an international research team with participation of the Leibniz Institute for Zoo and Wildlife Research (Leibniz-IZW) has now discovered that the raw material for evolution is much more abundant in wild animals than previously believed. The findings were published in “Science”.

Darwin thought of the process of evolution as something slow, visible only over geological ages. However, researchers have since discovered many examples of evolution occurring in just a few years. One such example is that of British populations of the peppered moth, where the abundance of two colour morphs changed dramatically in only a few decades, as the result of evolution by natural selection favouring different morphs depending on the level of air pollution. It was unclear however how fast animals with longer lifespans such as birds and mammals can evolve and adapt to environmental change.
Led by Dr Timothée Bonnet from The Australian National University, a team of 40 researchers from 27 institutions addressed this question and measured how much of the “fuel of evolution” exists overall in wild populations of birds and mammals. The answer: many populations of birds and mammals can evolve surprisingly fast – their amount of genetic difference in the ability to survive and reproduce being two to four times higher than previously thought.
One reason why previous studies underestimated the evolutionary potential of species is that earlier work did not fully account for individuals that never had any offspring. Doing so required the development of new statistical methods, as well as a meticulous selection of the data used for the study. Only wildlife populations studied very carefully and for many years could qualify for the task. “To perform this study, we needed to know when each individual was born, who they mated with, when they had babies, and when they died,” Bonnet said. Despite this difficulty, they managed to combine 2.6 million hours of field data collection and genetic analyses over decades from 19 populations of 15 species from around the world.
“This has been a remarkable team effort that was feasible because researchers from around the world were happy to share their data in a large collaboration. It also shows the value of long-term studies with detailed monitoring of animal life histories for helping us understand the process of evolution in the wild”, Professor Loeske Kruuk also from ANU (and now at the University of Edinburgh, UK) said.
One of the populations included in the study is that of spotted hyenas in the Ngorongoro Crater in Tanzania. Leibniz-IZW scientists have been studying this population for more than 26 years and compiled a genetic pedigree spanning more than 2000 individuals over eight generations. Other populations included superb fairy-wrens from Australia, song sparrows from Canada and red deer from Scotland.
If the new study revealed more “fuel of evolution” than anticipated, it also revealed noticeable differences between species. Spotted hyenas, it turned out, have the most “fuel” of all 15 species studied. This came as a surprise to the Leibniz-IZW team. “Spotted hyenas can live in all kinds of habitats and are the most widespread large carnivore in Africa. This suggests that they can adapt well to new environments, but we didn’t expect them to be among the best-equipped of all species studied”, said Dr Oliver Höner from the Leibniz-IZW and co-author of the study.
Apart from collecting a huge amount of data over decades and developing new methods, the team had to overcome an additional challenge. In highly social species such as the spotted hyena, changes in traits that influence individual survival and reproduction may not only be driven by genetic inheritance but also via social processes such as social learning. The method used to assess the amount of “fuel of evolution” cannot cope for the idiosyncratic details of every single population. Therefore, the team had to find a way to check for possible biases caused by social inheritance. To do so, Dr Alexandre Courtiol and DFG-funded postdoc Dr Liam Bailey from the Leibniz-IZW designed computer simulations representing a theoretical hyena population for which inheritance would only be social and compared the amount of “fuel of evolution” estimated for these virtual hyenas to that of the real population. “This additional test did not alter the results, suggesting that hyena populations may indeed have a relatively high amount of ‘fuel of evolution’ embedded in their gene pool”, Courtiol said.
According to the researchers, their findings have implications for predictions of species’ adaptability to environmental change. “This research has shown us that evolution cannot be discounted as a process which allows species to survive in response to rapid environmental change,” Dr Bonnet said. “With the habitat of many species changing at an increasing rate, there is no guarantee at all that these populations will be able to keep up. But what we can say is that evolution is a much more significant driver than previously thought in the adaptability of populations to the environmental changes we are currently seeing”.

<
Spotted hyenas adapt well to changes in their environment. Here, a clan of hyenas in the Ngorongoro ...
Oliver Höner
Oliver Höner/Leibniz-IZW

<
Spotted hyenas adapt well to changes in their environment. Here, a clan of hyenas in the Ngorongoro ...
Oliver Höner
Oliver Höner/Leibniz-IZW

Spotted hyenas adapt well to changes in their environment. Here, a clan of hyenas in the Ngorongoro Crater (Tanzania) quickly declared a broken-down roller as their new favorite resting place. 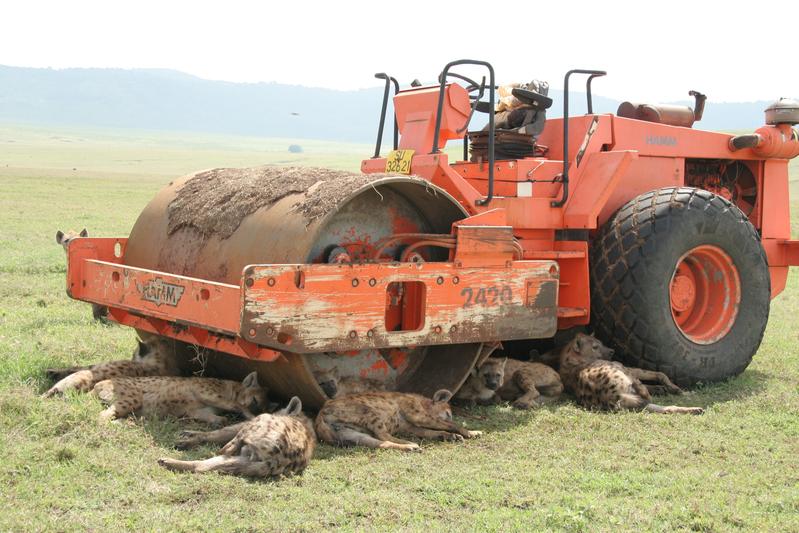