Good or bad? - Neurons in higher centers of the fly brain are crucial for the evaluation of odors

Neurons in the lateral horn of the brain of vinegar flies evaluate individual odors and mediate the resulting odor-guided behavior. Researchers from the Max Planck Institute for Chemical Ecology report in a new study in eLife that higher brain centers are able to filter odor information from the environment and transform the fly's outside world into a neuronal representation in the brain. The resulting behavior ensures survival and reproduction of the fly.

In the vinegar fly, specific neurons in the lateral horn, a higher brain region, process odor information and enable behavioral decisions based on the valence of the odors. A research team at the Max Planck Institute for Chemical Ecology has taken a closer look at a subgroup of these neurons, the glutamatergic neurons, and shown how different odors are processed in these neurons and how the strength of neuronal activity in turn determines the flies' behavior. Higher brain centers are thus able to filter odor information from the environment and transform the fly's outside world into a neuronal representation in the brain. The resulting behavior ensures survival and reproduction of the fly (eLife, doi: 10.7554/eLife.74637).

Vinegar flies, like all other insects, rely on their extremely sensitive sense of smell. They detect odors that lead them to their food or to their mating partners. For female insects, choosing the best site to lay their eggs is crucial for the survival of their larvae. They also rely on the right odor to do this, an odor that signals, for example, that there is plenty of food for the offspring, or that there are no predators nearby that could harm the larvae. Finally, there are odors that flies avoid, such as the odor of predators, food competitors, or rotten food. Therefore, it is not only important to recognize and detect odors, but also to evaluate whether the odor is good or bad. The valence of an odor is crucial for survival in nature and the continuation of the species, because, ultimately, the behavior of the flies is based on it.

The research team led by Sudeshna Das Chakraborty and Silke Sachse from the Research Group Olfactory Coding is dedicated to the question of how neurons in the olfactory center in the brain of flies process odor information to enable odor-guided behavioral decisions. Numerous studies have already visualized and evaluated the activity of neurons during the perception of odors in the fly brain using the model organism Drosophila melanogaster. However, they have predominantly focused on understanding odor coding at the level of the antennal lobe, the primary olfactory center in the brain of insects. While much progress has been made in olfactory coding in the antennal lobe, the coding strategies and processing mechanisms of higher brain centers such as the lateral horn remain largely elusive. However, the lateral horn is one of the most important centers for olfactory processing in the insect brain, as it primarily coordinates innate, but vital, behavioral responses.

"In this study, we investigated how higher-order neurons read, process, and evaluate odor information. More specifically, we wanted to find out how a subpopulation of neurons in the lateral horn, namely glutamatergic neurons, identify and evaluate odors, thus fine-tuning the information deriving from the antennal lobe," explains first author Sudeshna Das Chakraborty.

For their experiments, the researchers used 14 different odors that are ecologically relevant to vinegar flies and have a repellent or particularly attractive effect on the flies. For example, isoamyl acetate, an odor typical of very ripe bananas, has a particularly attractive effect on vinegar flies, while geosmin, a substance formed by certain bacteria and fungi that signals danger to the flies, is repulsive and triggers avoidance. Using various imaging techniques, the scientists were able to show which neurons in the lateral horn were activated by the different odors and to what extent.

Since the lateral horn does not have a clear structural organization, the researchers divided this brain area into several smaller regions using a grid approach and compared the response patterns to different odors in each pixel. "This approach allowed us to analyze how every odor evokes a specific response map and how the attractive and aversive odors are segregated in the lateral horn in terms of their response patterns," says Sudeshna Das Chakraborty.

Higher-order neurons retain the identity of an odor stimulus by forming an odor-specific activity pattern that can be visualized with imaging techniques. They encode the valence of the odor by integrating information from multiple olfactory channels. "We postulate that the representation of these stimulus features in the lateral horn enables the insect to respond faster, more accurately and more meaningfully to an odor in order to ensure survival and reproduction in the natural environment. The same neuronal mechanisms might also control the decision-making processes and innate behavioral responses in other animals, “Silke Sachse summarizes the results of the study.

Further studies will now focus on completing the olfactory circuitry up to the motor centers where the behavior is eventually executed. The goal of the research is to elucidate the entire chain of events, from detecting an odor with the antennae to behavior, in the flies' brains.

<
Schematic of odor representation and evaluation in the lateral horn, a higher center in the vinegar ...
Sudeshna Das Chakraborty
Max Planck Institute for Chemical Ecology

<
Schematic of odor representation and evaluation in the lateral horn, a higher center in the vinegar ...
Sudeshna Das Chakraborty
Max Planck Institute for Chemical Ecology

Vinegar fly Drosophila melanogaster on a piece of peach. 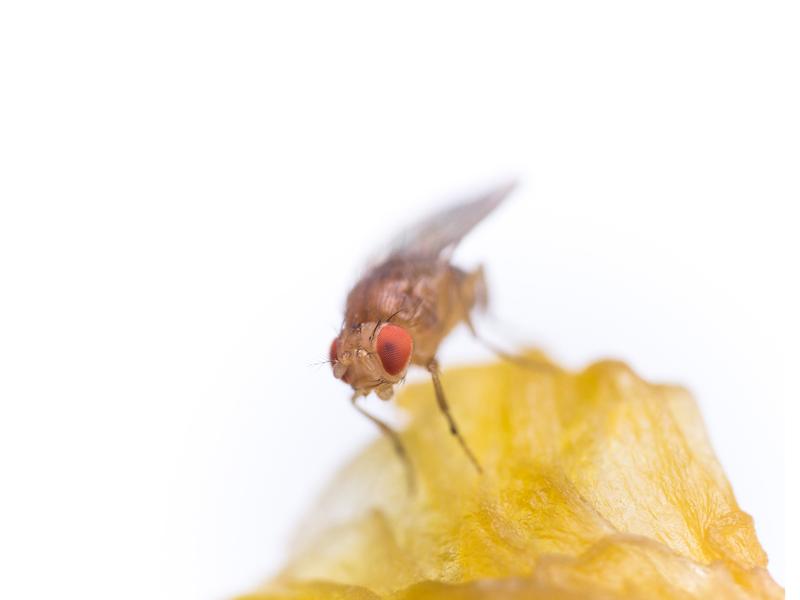 Schematic of odor representation and evaluation in the lateral horn, a higher center in the vinegar fly brain