Home > Pressemitteilung: Crops for the desert

Crops for the desert

Southern Africa has a rich bounty of crop varieties, crop wild relatives, orphan crops and underutilised plant species, collectively known as plant genetic resources for food and agriculture (PGRFA), which have sustained generations of local farmers and rural communities and enabled them to cope with changing environmental conditions. The project "Farmer Resilience and Melon Crop Diversity in southern Africa" (FRAMe) aims at a future-oriented agriculture of crop diversity using melons as an example. The German Federal Ministry of Education and Research (BMBF) is funding the project with more than 300,000 euros over the next three years.

Orphan crops have been a steady source of nutrition for smallholder farmers and rural communities for generations. "In the face of ever-changing environmental conditions in the wake of climate change and a growing world population, orphan crops represent an important potential to meet increasing nutritional as well as ecological demands," says Prof. Dietmar Quandt of the Nees Institute for Plant Biodiversity at the University of Bonn. These plant genetic resources combined with extensive traditional knowledge have enabled local farmers to survive. "However, due to rapid ecological changes, it is not foreseeable how future-oriented agriculture can succeed for a broad mass of smallholders and larger agribusinesses in southern Africa."

The FRAMe project therefore aims to register potentially successful varieties of crops based on the experiences of local farmers and to analyze them by molecular genetics. Using melons as an example, the researchers want to gain a broad overview of the existing crop diversity and its adaptation to periods of drought. This should lay a foundation for future-oriented agriculture in southern Africa.

The Nees Institute of the University of Bonn is represented in the FRAMe project by Prof. Quandt as spokesperson for the German site and as an associated scientist of the Gobabeb Namib Research Institute (Namibia). The Bonn researchers aim to make a far-reaching contribution to better adapted crops, particularly in terms of drought tolerance, through the use of modern molecular methods combined with extensive sampling, ecological modeling and incorporating the experiences of local farmers. Quandt says, "The project has unprecedented potential for food security as well as for global crop quality improvement programs."

"Southern tropical Africa is considered as a center of diversity for cucurbits," says Dr. Gillian Maggs-Kölling of the Gobabeb Research Center in Namibia. She is Namibian spokesperson and initiator of the FRAMe project. The cucurbits (Cucurbitaceae) comprise 116 species in 28 genera in this area. A significant proportion are used in traditional agro-ecosystems, cooking, culture and local economies. For example, !nara (Acanthosicyos horridus), an endemic gourd species of the very arid Namib Desert, is used extensively by local people as a food and medicinal remedy.

Most likely the origin of melons is in the desert. "This hypothesis doesn't really seem obvious", Quandt says. "Nevertheless, especially in southern Africa, we find a great diversity of different melon species that are highly specialized and adapted to the extreme conditions." Farmers, for example, cultivate numerous Citrullus varieties related to the common watermelon - and these are precisely the ones that are adapted to drought and disease. FRAMe will characterize this diversity and thereby simultaneously clarify South Africa's contribution to the domestication of melons.

<
Fruits of the melon species Citrullus ecirrhosus – a relative to the common watermelon – at Springbo ...

<
A spiny specimen of a melon: !nara (Acanthosicyos horridus), an endemic gourd species of the very dr ...

<
Fruits of the melon species Citrullus ecirrhosus – a relative to the common watermelon – at Springbo ...

<
A spiny specimen of a melon: !nara (Acanthosicyos horridus), an endemic gourd species of the very dr ...

Fruits of the melon species Citrullus ecirrhosus – a relative to the common watermelon – at Springbokwasser in the Torra Conservancy in the Namib Desert, Namibia. 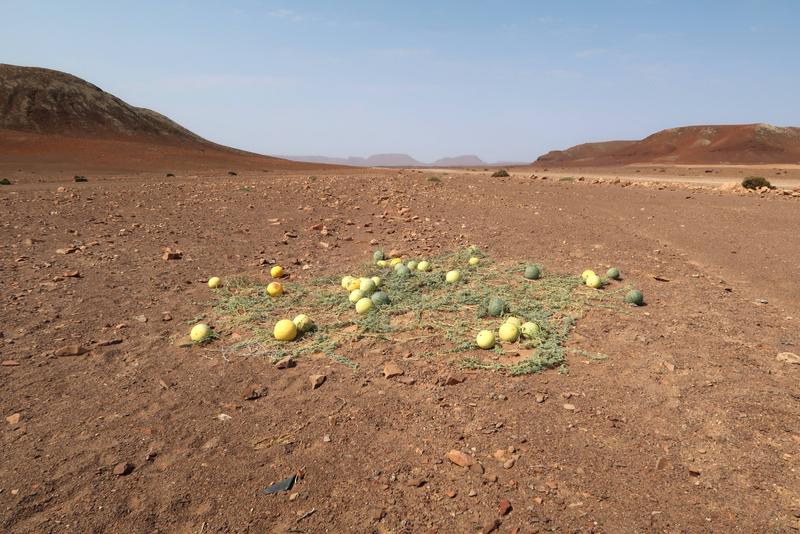 A spiny specimen of a melon: !nara (Acanthosicyos horridus), an endemic gourd species of the very dry Namib Desert. 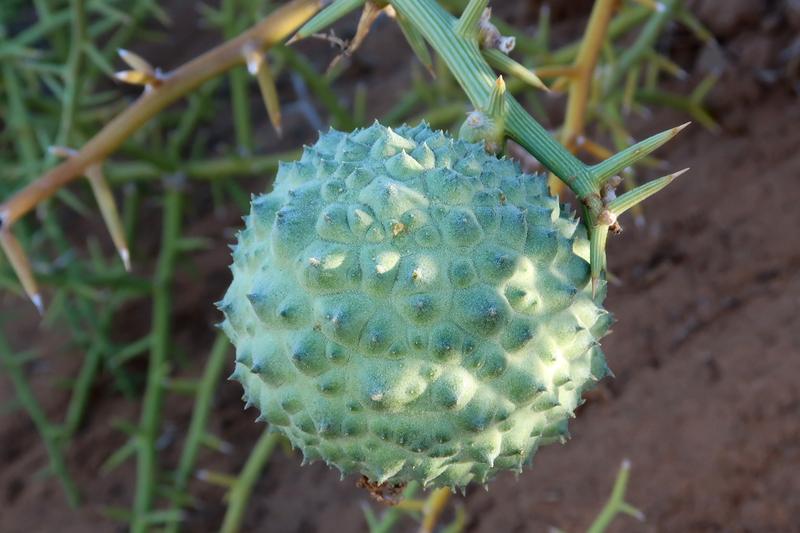