Complex manual steps in aircraft production – such as the assembly of newly developed, weight-reducing thermoplastic integral frames that stiffen the fuselage in the transverse direction – are to be replaced in the future by automated, intelligent, and precise pre-assembly processes, thus not only increasing production rates but also reducing costs.

In the joint project “OSFIT” (“One Shot Fully Integrated Thermoplastic Frame”) funded by the German Federal Ministry for Economic Affairs and Climate Action (BMWK), it was successfully demonstrated that it is possible to manufacture integral frames from carbon fiber-reinforced plastics (CFRP) based on thermoplastics. This is an important step for aircraft construction towards a circular economy, as these plastics, which can be deformed again by heating after curing, are easier to repair or recycle. The project partners Premium Aerotec GmbH (Augsburg and Nordenham), Automotive Center Südwestfalen GmbH (Attendorn), Leibnitz Institute for Composite Materials (IVW; Kaiserslautern) and Fraunhofer IGCV (Augsburg) were responsible for novel manufacturing processes for the frame using tape laying and consolidation.

In addition, the experts for Automation and Production Technology at the Fraunhofer Institute for Manufacturing Technology and Advanced Materials IFAM in Stade developed processes for the automated pre-assembly of such an integral frame in the OSFIT sub-project “Robot-assisted adapted in-line shim processes using 3D printing”. Their work resulted in the implementation of both a virtual gap measurement and a robot-guided automated 3D printing application of gap fillers (shim) as joining technology. For this purpose, the IVW developed a 3D printer.

“The virtual gap measurement enables us to determine the joining gap between the thermoplastic CFRP integral frame and the aircraft skin prior to the installation process. Then, the gap filler will be applied by a robot onto the joining surfaces of the frame. This pre-assembly process uses 3D printing, with which the assembly of the integral frame including precise gap filling to the aircraft skin or fuselage can take place”, explains project manager Leander Brieskorn from Fraunhofer IFAM in Stade.

The validation of these automation solutions on a prototype enabled the successful completion of the project.

In this context, automated processes were developed in the “OSFIT” project to reduce both the time required and the complexity of the assembly and joining steps. In addition to the production of the frame, the gaps between the frame and the fuselage shell had to be measured virtually in advance and the gap fillers applied automatically in a pre-assembly station before the components were mounted in the final installation position on the fuselage shell.

The solution: after virtual measurement, the robotically guided end effector, newly developed by Fraunhofer IFAM, applies the gap filling volumes precisely and directly to the frame using the 3D printer provided by the project partner IVW. Subsequently, the integral frame fitted with the exactly tailored shim can be seamlessly assembled to the aircraft fuselage shell. This has already been successfully demonstrated at Fraunhofer IFAM in Stade.

As part of the “OSFIT” project, the researchers in Stade have set up a demonstrator that allows better accessibility of the joining partners frame and fuselage shell. Corresponding to the actual joining situation in the aircraft fuselage, this demonstrator allows the positioning and joining of the scaled-down prototype components with the aid of vacuum suction cups and clamping levers. It also enables the joining surfaces to be measured by means of laser trackers. The components are positioned relative to each other in such a way that no stresses or unwanted forces are generated during joining.

The gap values of the components can be calculated and visualized by software. Then these values are sent to the 3D printer. The 3D printing end effector subsequently applies the gap filling volumes onto the joining surfaces, which are the frame feet.

It has been possible to clamp the frame in such a way that the printer can be moved to the respective frame foot via a robot arm. After the printing head has been positioned approximately at the clamping foot, the printer references and applies the required gap volume using its own kinematics.

Like the frame, the gap filler material is made of fiber-reinforced thermoplastic, which can be reshaped by heating. Thus, infrared lamps attached to the end effector allow the printed, melted material to join the frame foot surface while creating the required adhesion.

The shim process developed offers great potential for future frame assembly processes and can be adapted to other assembly processes requiring shimming in aircraft construction. Fraunhofer IFAM in Stade is aiming to acquire follow-up projects using this technology and to qualify them together with the aircraft manufacturer.

After a period of four years, the research project “OSFIT” (funding code: 20W1706D) funded by the German Federal Ministry for Economic Affairs and Climate Action (BMWK) ended recently. On behalf of all project partners, Fraunhofer IFAM would like to thank the BMWK for the funding provided. 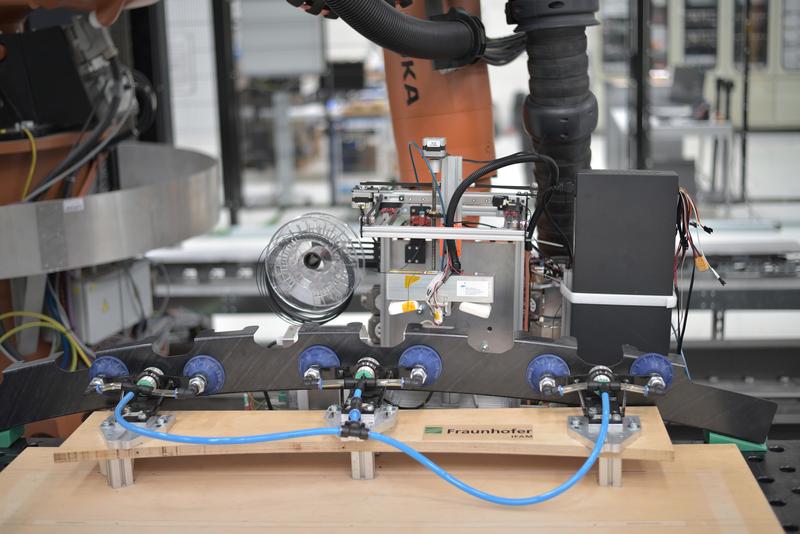