Understanding how microbiota thrive in their human hosts

A research team lead by scientists from the Max Planck Institute for Biology, Tübingen, has now made substantial progress in understanding how gut bacteria succeed in their human hosts on a molecular level. They investigated how bacteria produce inositol lipids, substances vital for many cellular processes in humans and other eukaryotes but hitherto rarely observed in bacteria. The results, now published in the journal Nature Microbiology, indicate that inositol lipids have implications for the symbiosis between the bacteria and their hosts.

Microorganisms like bacteria and fungi populate the human gut and contribute to many biological functions such as metabolism or immunity. In order to understand the influence of the microbiome on humans, researchers have been trying to not only identify which microorganisms are present in the human gut, but also shed light on the molecular mechanisms of the interactions between the microbiome and its human host. A research team lead by scientists from the Max Planck Institute for Biology in Tübingen has now improved our understanding of these processes by investigating how gut bacteria produce a certain family of chemical compounds known as inositol lipids.

Inositol lipids play important roles for many cellular processes in humans and most other non-bacterial life forms: they regulate how cells send signals throughout the body, modulate inflammation, and help ensure that proteins end up in to the correct part of a larger cell. Imbalances in inositol levels are linked to diseases like polycystic ovary syndrome, the most common hormone disorder in women of reproductive age.
In contrast to humans and other eukaryotes for whom inositol lipids are essential, bacteria produce them relatively rarely. The research team led by Ruth Ley, scientific director of the Department of Microbiome Science at the MPI for Biology, was now able to describe inositol lipid synthesis in Bacteroides thetaiotaomicron, a common bacterium in the large intestine and a popular model organism in microbiome science.
By developing a previously undescribed strain of Bacteroides thetaiotaomicron for which they could control whether inositol lipids were produced, the researchers discovered that these substances change the bacteria’s physiology. “Although we don’t fully understand the precise role of inositol lipids for bacterial fitness yet, we have seen that they are necessary for a bacterium to succeed in the gut of their host”, says Stacey Heaver, lead author of the publication. The researchers found inositol in the capsule of the bacteria, an outer layer which protects them against being engulfed by immune cells of the host. Moreover, inositol lipids change the resistance of Bacteroides thetaiotaomicron to antimicrobial peptides, substances used by the host to fight off pathogens.

The researchers also described the metabolic pathways for inositol lipid synthesis in Bacteroides thetaiotaomicron, that is, the chain of chemical reactions leading to the production of inositol lipids. They additionally identified a second putative pathway for bacterial synthesis of these lipids. “Figuring out the pathways is interesting because it enables us predict which other microbes might be able to make inositol lipids the same way our model organism does”, explains Heaver. “With this knowledge, we might even be able to engineer or manipulate inositol lipid production.”
Heaver looks forward to future research about if and how bacterial inositol lipids might benefit the host organism: “It is possible that there is a cross-talk between the bacterial lipids and the inositol lipids produced by the mammalian host”, she says. “We’ve just come a big step closer to understanding the scale of such interactions.” 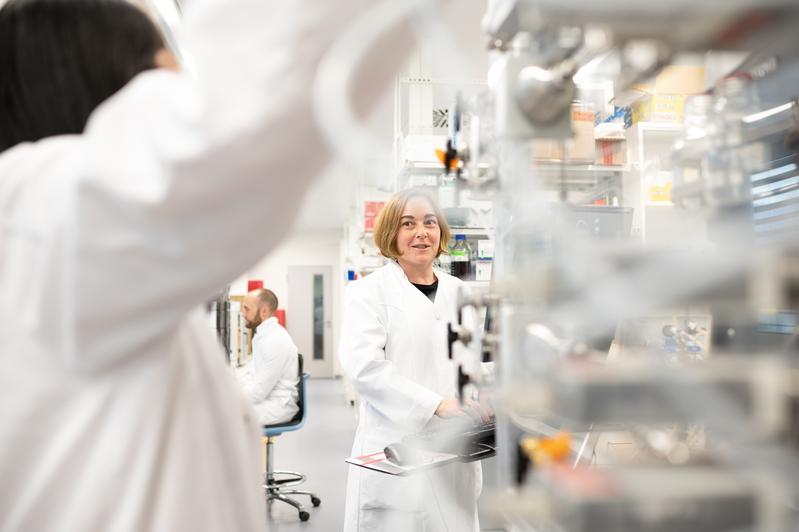