Sperm are masters of tetris packing

During sperm production, an enormous amount of DNA has to be packed into a very small space without breaking anything. A central role is played by certain proteins around which the DNA thread is wrapped - the protamines. A recent study by the University of Bonn provides new insights into this important mechanism. The results have been published in the journal PLoS Genetics.

If you are moaning once again about your suitcase being far too small as your vacation approaches, you should take human sperm cells as an inspiration. During their production, they are faced with an almost insoluble task. They have to pack 23 DNA threads with a total length of one meter into a head with a diameter of just three thousandths of a millimeter. And in the process, the delicate threads must not become entangled in an inextricable knot, nor must they tear.

We often sit on the suitcase to close it. The body resorts to a similar trick during spermatogenesis. Normally, DNA forms a comparatively loose tangle. In sperm cells, however, it is enormously compressed. " If DNA were to take up as much space as a watermelon under normal circumstances, sperm cells would then only be as big as a tennis ball," says Prof. Dr. Hubert Schorle from the Institute of Pathology at the University Hospital Bonn.

DNA must be enormously compressed

Biologists call this process hypercondensation. In their loose state, DNA threads are wrapped around numerous spherical protein molecules, the histones. In this state, they resemble 23 tiny strings of pearls. During hypercondensation, the histones are first exchanged for transition proteins. In a subsequent step, these are replaced by so-called protamines. Due to their chemical composition, protamines exert a very strong attraction on DNA. The thread therefore wraps itself in very firm and tightly loops around the protamine

"Most mammals seem to produce only one type of protamine, PRM1," explains Dr. Lena Arévalo, a postdoctoral researcher in Schorle's group. "In humans, but also rodents like mice, it's different - they have a second type, PRM2." Exactly what this second protamine is needed for was not known until now. However, it was known that some parts of it are successively cut off during sperm development.

And it is precisely these cut-off parts that appear to be immensely important, according to the new study. When mice produce only a truncated PRM2 molecule that lacks the cut-off snippets, they are infertile. "The removal of transition proteins during hypercondensation is impaired," Arévalo says. "In addition, the condensation seems to proceed too quickly, causing the DNA strands to break."

Hope for therapies against male infertility

It is possible that a defective protamine 2 can also lead to infertility in males of our own species. The team now plans to investigate this hypothesis further. "There are only a few research groups that analyze the role of protamines in hypercondensation," says Schorle, who is also a member of the Transdisciplinary Research Area (TRA) "Life and Health" at the University of Bonn. "We are the only laboratory in the world to date that has succeeded in generation and breeding of both PRM1 and PRM2 deficient mouse lines which are now used to study the role of these proteins in spermatogenesis.” In the medium term, this could also lead to new therapies against male infertility, the researcher hopes.

Funding:
The study was supported by the German Research Foundation (DFG) and the FEMHABIL program of the University Hospital Bonn. 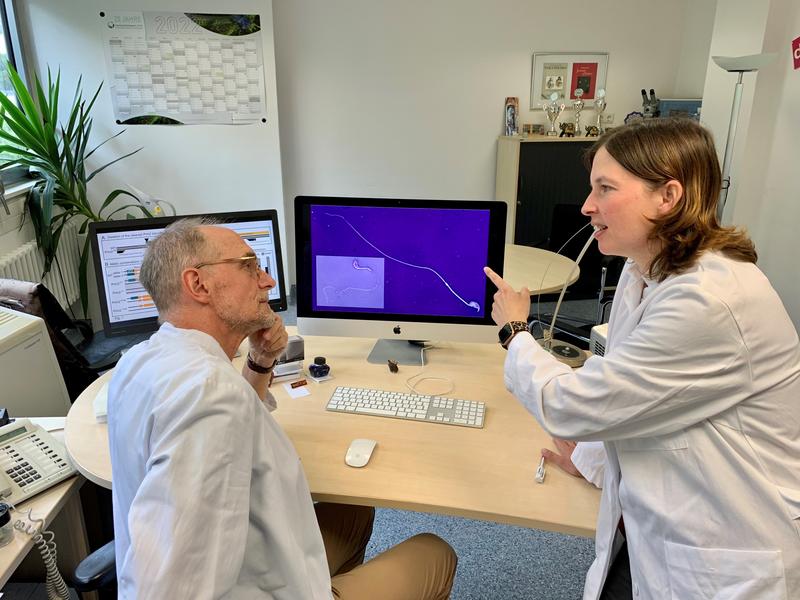