Interplay of genes: The understudied transcription factor RFX7 has a central role in growth and cancer

Proteins that are frequently altered in tumors play a prominent role in cancer research. The protein RFX7, a largely unknown transcription factor, has recently been linked to lymph node cancer. Researchers at the Leibniz Institute on Aging - Fritz Lipmann Institute (FLI) in Jena have now partially elucidated the function of this protein. RFX7 acts as a tumor suppressor and counteracts the development of cancer. Once activated, it induces other tumor suppressors and inhibits important growth regulators. The reactivation of RFX7 could therefore be of substantial interest in future cancer studies.

Jena. The biological process of cell division is essential for the growth and reproduction of all living organisms. Certain proteins can regulate this division process and control the proliferation of cells. Therefore, the loss of this fine-tuned control is a critical event in cancer development. Proteins that promote cell division thus also often contribute to carcinogenesis (oncoproteins). At the same time, however, proteins can also inhibit cell division and, as so-called tumor suppressors, counteract the development of cancer. Perhaps the best-known example is the transcription factor p53. This protein, also known as the “guardian of the genome,” can interrupt the process of cell division to stop the proliferation of stressed and degenerated cells. This gives the cell time to repair damage through internal repair mechanisms. However, if the defects are too severe and cannot be fully repaired, a self-destruct mechanism is triggered and the cell stops multiplying.

Transcription factors have an important role in the development of cancer, as they usually regulate many genes. Irregular changes in the sequence of a transcription factor (mutations) can therefore have far-reaching consequences for a cell and, as in the case of p53, strongly promote cancer development. The p53 protein is mutated in about half of all tumors and is deactivated in various ways in the remaining tumors. Researchers at the Leibniz Institute on Aging - Fritz Lipmann Institute (FLI) in Jena have now examined parts of the network of genes that are regulated by p53 in more detail: p53 activates the protein RFX7, another transcription factor and tumor suppressor, which in turn activates its own network of genes.

“Like p53, the RFX7 protein is a transcription factor whose increased mutation rate was only recently detected in lymph node cancer by state-of-the-art analytical methods, but which, unlike p53, has hardly been researched yet,” explains Dr. Martin Fischer, laboratory head in the Hoffmann research group at the FLI. In addition to cancer, RFX7 has been associated with metabolic and neurological diseases – major obstacles to healthy aging.

The researchers have now discovered that the protein RFX7 is switched on by p53 in response to stress and that many of the genes regulated by RFX7 are also known tumor suppressors. “The fact that RFX7 appears to exert its function as a tumor suppressor by controlling other tumor suppressors and that it enables p53 to regulate these proteins is very exciting for us,” reports Steve Hoffmann, head of the Computational Biology research group at the FLI. “By identifying genes that are regulated by RFX7, we were able to systematically search for changes in gene regulation in tumor databases. In cancer, the effect of RFX7 seems to be frequently neutralized even when not mutated.”

Watchdog’s p53 and RFX7 – Inhibition of mTORC1 and AKT

Cell growth is closely related to cell division. The kinases AKT and mTORC1 are particularly important in this process; both enzymes are stimulated by growth factors and other external signals and can promote both tumor development and cell growth. In cancer, these two kinases are often hyperactive and mTORC1 has an important role in the aging process. It has been known that p53 can inhibit the two kinases AKT and mTORC1 to counteract cancer development.

“The control of the kinases by p53 is of enormous importance for the fitness of the cells,” explains Martin Fischer. However, deciphering the underlying control mechanisms has thus far proven to be very difficult. So far, only a few proteins have been identified that play a role in the p53-mediated inhibition of AKT and mTORC1. The Jena research team led by Dr. Fischer and Prof. Hoffmann has now determined that p53 requires the transcription factor RFX7 to inhibit both kinases. This finding underlines the importance of RFX7 for future cancer research.

The mapping of RFX7-controlled genes identified, among others, the metabolic regulator DDIT4, which is indirectly activated by p53 via the tumor suppressor RFX7. The results, published in the journal Oncogene, suggest that the p53/RFX7-dependent inhibition of AKT is mediated via DDIT4. “Investigating further target genes of RFX7 could help us to determine the mechanism that underlies the regulation of mTORC1 by p53 and RFX7,” remarks Martin Fischer and points towards future research.

Cancer research often employs samples from patients’ tumors, whose cells are cultivated in petri dishes in the laboratory. However, the cell culture medium and the nutrients it contains do not correspond exactly to the environmental conditions in a normal organism. Such cell lines, with a non-physiological supply of nutrients, have been used in previous studies on the regulation of mTORC1. “However, the availability of nutrients seems to be a critical factor in the regulation of mTORC1,” Steve Hoffmann stresses, “which requires careful consideration of the culture conditions in the experiment.”

Reactivation of RFX7 as an anti-cancer strategy?

“Our results show how RFX7 functions as a novel tumor suppressor: it activates other tumor suppressors, such as the metabolic regulator DDIT4, and inhibits important growth regulators, such as AKT and mTORC1,” Martin Fischer summarizes. “It remains an open question which further mechanisms enable RFX7 to control the development of cancer and to regulate metabolic and neurological processes. In the future, we want to learn how the transcription factor RFX7 itself is regulated. This is important to know because, unlike p53, RFX7 seems to be deactivated but does not appear to be mutated in many tumors. Reactivating RFX7 could therefore be a new approach to cancer therapy.”

The current research results on the new function of RFX7 and its significance for the tumor suppressor p53 were recently presented to an expert audience at the “18th International p53 Workshop” in Israel.
https://www.weizmann.ac.il/conferences/P53W2020/program

<
Stress activates p53. This leads to the activation of RFX7, which, like p53, is a transcription fact ...

<
Stress activates p53. This leads to the activation of RFX7, which, like p53, is a transcription fact ...

Stress activates p53. This leads to the activation of RFX7, which, like p53, is a transcription factor and tumor suppressor. RFX7 inhibits the kinases AKT and mTORC1, important regulators of cell growth, which may enable RFX7 to suppress cancer. 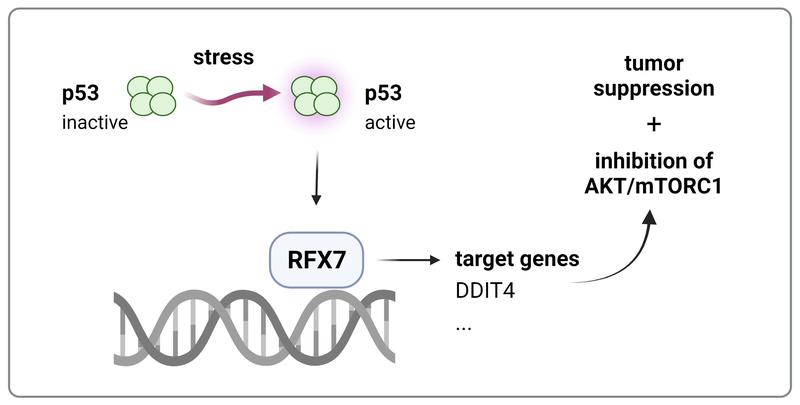