Researchers at the Universities of Bayreuth and Linköping have produced two surprising compounds of nitrogen and the rare earth metal yttrium under very high pressure. The new polynitrides contain ring- and spiral-shaped crystal structures of nitrogen that have never before been observed in experiments or predicted in theoretical calculations. They look similar to widespread structures of carbon compounds. The high-pressure syntheses described in the journal "Angewandte Chemie" show: The diversity of possible nitrogen compounds and their structures is far greater than the behavior of nitrogen atoms under normal conditions would suggest.

The number of nitrogen compounds occurring in nature is very small compared to the structural diversity of carbon compounds. This is mainly because nitrogen atoms form extremely stable triple bonds at normal ambient pressure. In the last two decades, however, it has become apparent that the chemistry of nitrogen changes significantly under very high pressures. Research teams at the University of Bayreuth, led by Prof. Dr. Natalia Dubrovinskaia and Prof. Dr. Leonid Dubrovinsky, have synthesized novel nitrogen compounds (nitrides) that exhibit unusual structures and, in some cases, have technologically very attractive properties – such as very high energy density or extraordinary hardness. The study now published builds on this research.

The two new yttrium nitrides, YN₆ and Y₂N₁₁, were created in a laser-heated diamond stamp cell. At a compression pressure of 100 gigapascals (one million times higher than the pressure of the Earth's atmosphere) and at a temperature of about 2,700 degrees Celsius, chemical reactions occurred between yttrium and nitrogen atoms, leading to the new compounds. The crystal structures of YN₆ and Y₂N₁₁ have unique arrangements of nitrogen atoms:

• YN₆ crystals contain planar, symmetrically constructed ring structures called macrocycles. In each of these cycles, an yttrium atom is surrounded by 18 nitrogen atoms arranged in a star shape. Additional yttrium atoms ensure that the macrocycles lie stably on top of each other.

• Y₂N₁₁ crystals, in turn, contain two spiral chains of nitrogen atoms that together form a double helix. Such a structure is very rare in the field of inorganic chemistry. The polynitrogenic double helix now discovered may be suitable as a blueprint for the synthesis of other inorganic spiral structure.

Crucial for the detection of these very unusual structures were the latest techniques of high-pressure synchrotron single-crystal X-ray diffraction. Among other things, they revealed that the nitrogen atoms in the new crystal structures are connected to each other by covalent bonds, while there are no covalent bonds between the nitrogen and yttrium atoms.

"In organic chemistry, ring- and spiral-shaped carbon compounds are of central importance. The few polynitrides known to date in which nitrogen atoms form such structures are all inorganic compounds. However, our high-pressure synthesis of Y₂N₁₁ is further evidence that nitrogen has the fundamental potential to form such structural units," says Andrii Aslandukov, first author of the new publication and a PhD student of the research team of Prof. Dr. Leonid Dubrovinsky at the Bavarian Geoinstitute (BGI) and Prof. Dr. Natalia Dubrovinskaia at the Laboratory of Crystallography of the University of Bayreuth. "Together with our partners at Linköping, we will continue to advance research on such nitrogen compounds at Bayreuth. We may not be far away in high-pressure research from synthesizing polynitrides that exhibit a structural diversity undreamed of today. This would be the beginning of a new branch of chemistry: nitrogen organic chemistry at high pressures," explains Prof. Dubrovinskaia.

Andrey Aslandukov et al.: Anionic N₁₈ Macrocycles and a Polynitrogen Double Helix in Novel Yttrium Polynitrides YN₆ and Y₂N₁₁ at 100 GPa. Angewandte Chemie International Edition (2022), DOI: https://doi.org/10.1002/anie.202207469 - The editorial board of the journal, which is published by the German Chemical Society (GDCh), recognized the paper as a "Very Important Paper". 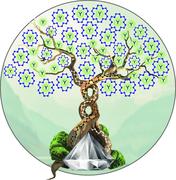 <
Unique arrangements of nitrogen compounds in the new YN₆ and Y₂N₁₁ yttrium nitrides created in a dia ...

<
Unique arrangements of nitrogen compounds in the new YN₆ and Y₂N₁₁ yttrium nitrides created in a dia ...

Unique arrangements of nitrogen compounds in the new YN₆ and Y₂N₁₁ yttrium nitrides created in a diamond stamp cell at a compression pressure of 100 gigapascals. 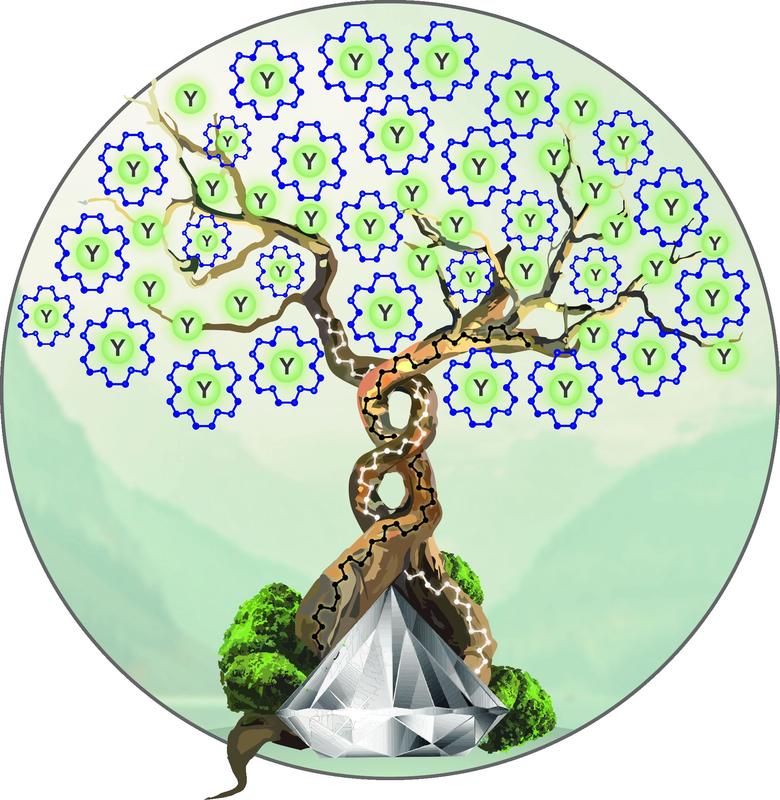