Home > Pressemitteilung: Time capsules from the early days of ...

Time capsules from the early days of the Earth

An international team of scientists led by Prof. Christoph Heubeck of Friedrich Schiller University Jena, Germany has drilled boreholes in South Africa that will help answer questions about the early history of our planet. The cores come from the “Barberton greenstone belt” near South Africa’s border with Eswatini (formerly Swaziland) and can be dated to about 3.2 billion years ago. “These drill cores are, in a sense, time capsules in which information from the early days of the Earth is stored,” says Heubeck.

The drilling campaign of the BASE (Barberton Archean Surface Environments) project, at times with three drilling rigs operating simultaneously, began in November 2021 and ended in end-July 2022 with the last of eight boreholes. Starting in September, 3,131 metres of core material will be scientifically analysed in detail by an international team under Heubeck’s coordination.

Findings from the earliest history of the Earth aid space travel

“These rock sequences represent an extremely high-resolution record of a short section of the Earth’s earliest history,” says Christoph Heubeck. The geologist estimates the average sedimentation rate at about one metre per thousand years, comparable to deposition rates on many coasts today.

A great deal of information can be obtained from the cores, for example about the Moon’s orbit, tides, volcanic activity, UV radiation, meteorite impacts, the temperature of the oceans and the atmosphere, as well as the intensity of chemical weathering.

A major target of the drilling were fossil microbial mats, which were widespread on sandy shorelines and gravel plains, and occasionally dried out and were reworked by waves. “How could life persist and spread in this challenging, high-energy environment?,” asks Heubeck.

Answers to these questions can also enable researchers to draw inferences about life on other planets. It is no coincidence that the US space agency NASA has contributed to the costs of the project. The BASE project took shape over a seven-year qualification process. It is mainly funded by the Potsdam-based International Continental Scientific Drilling Program (ICDP), a scientific drilling consortium with 21 member states. The science team members obtained 1.8 million euros to cover costs of drilling and several times that amount for the research costs, including the salaries of numerous PhD students and postdocs.

To obtain the drill cores, a diamond core bit ate its way into the rock. Because the rock layers are highly folded and most strata are more or less vertical, the core bit bored into the rock at a 45-degree angle and to a depth of about 400 metres, often from older to younger rock layers. “About 10 to 30 metres of cores were pulled per day,” says Heubeck. These are marked, sawn lengthwise, photographed and described. One half remains in South Africa’s national core repository, effectively a “library of the underground”, while the other half is shipped to the ICDP consortium’s core repository in Berlin-Spandau. There the cores will again be documented in detail and, after a sampling workshop, made available to the participating researchers.

Prof. Heubeck can already read the first findings from the cores. For example, tidal deposits show that the distance between the Earth and the Moon was much smaller than it is today. “The moon was closer to the Earth and orbited it faster; at the same time, the Earth rotated more quickly,” says Heubeck. In addition, layers of microbial mats that grew in shallow water are found as black streaks. Undisturbed by modern animal predators such as worms or snails, they probably carried out photosynthesis. The waste product was oxygen, which is an indispensable prerequisite for higher forms of life. It is simply amazing to see in what a – for us – hostile environment these microbial mats thrived, says Christoph Heubeck. He expects many more exciting discoveries from the drill cores; their analysis will take the next few years.

<
The drilling crew deploys an instrument at the end of the drill pipe that measures the orientation o ...
Image: Christoph Heubeck
University of Jena 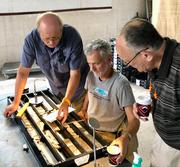 <
The drilling crew deploys an instrument at the end of the drill pipe that measures the orientation o ...
Image: Christoph Heubeck
University of Jena

The drilling crew deploys an instrument at the end of the drill pipe that measures the orientation of the rock strata at a depth of about 200 m. 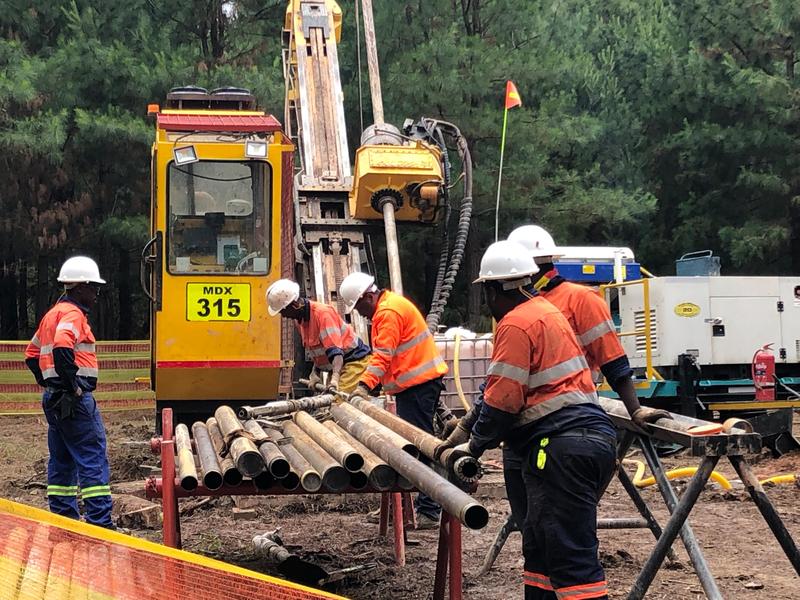 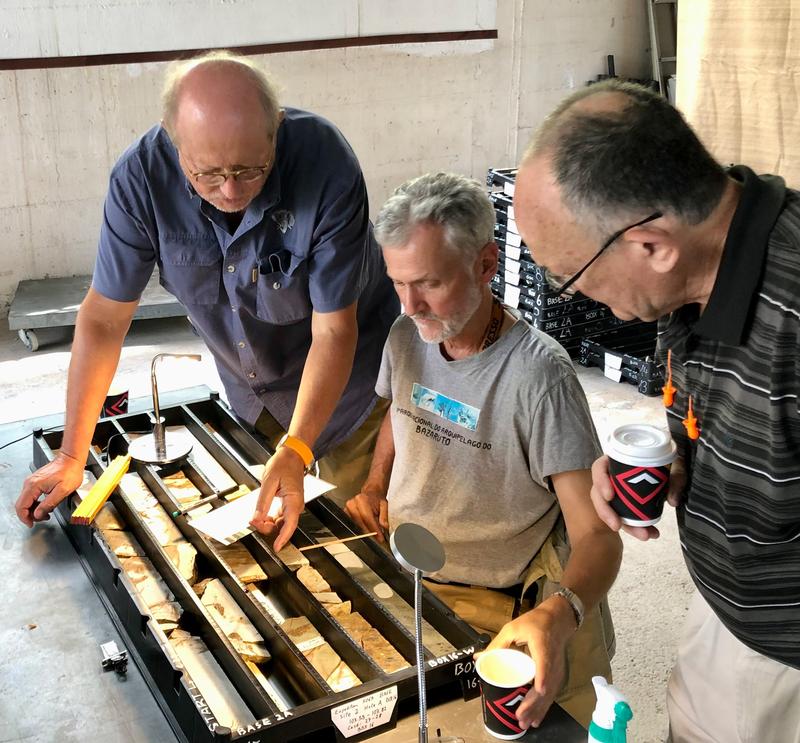