A new study from the Max Planck Institute for Evolutionary Biology in Plön and the University of Sussex in the UK shows that the age of a gene determines how fast they adapt. These findings demonstrate how gene evolution occurs as an “adaptive walk” through time.

New species arise and evolve because individuals accumulate mutations in their genome, some of which have no effect. Others lead to changes that give their carriers distinct competitive advantages. As early as 1932, Sewall Wright introduced a metaphor that inspired decades of theoretical and experimental research in evolutionary biology to describe the process of adaptation. Wright described the model of the "fitness landscape". Here he described an evolving population as "hikers" moving towards a fitness peak. Much like a mountaineer slowly climbing to the top of a mountain. In 1998, Orr demonstrated that this "adaptive walk" follows a simple rule of diminishing returns: The further a population is from its fitness peak, the greater the steps it takes. One prediction of this theory is that recently evolved, i.e. "young" genes tend to accumulate more adaptive mutations with greater effects than older genes because they are further away from their fitness peak. This is precisely the hypothesis that Ana Filipa Moutinho and Julien Dutheil from the Max Planck Institute for Evolutionary Biology, together with Adam Eyre-Walker from the University of Sussex, wanted to test.

However, testing this hypothesis proved to be quite difficult. The historical record of mutations accumulated in a gene is usually not available, and their effects on fitness are largely unknown. Moreover, other properties of genes, such as their length, can distort the effect of gene age. Therefore, the authors proposed a new approach to test the adaptive walk model of gene evolution.

First, they used population genetic models that can assess variation in the fitness effect of mutations. To do this, they compared the genomes of several individuals in a population and measured the rate of adaptive evolution in different gene categories. Likewise, they took advantage of the fact that not all genes in a genome are the same age. Some genes are young and shared by only a few closely related species, while others are older and shared by species that separated millions of years ago. Finally, they used the distribution of mutations among genes of different ages to understand how adaptive mutations spread over time.

Using two distinct species, the fruit fly Drosophila melanogaster and the small flowering plant Arabidopsis thaliana, this study showed that a gene's age significantly impacts the rate of molecular adaptation and that mutations in young genes tend to have larger effects. These results provide the first strong empirical evidence that molecular evolution follows an adaptive walk model over a deep evolutionary timescale and adds a new layer of evidence to the fitness landscape theory proposed almost 100 years ago. 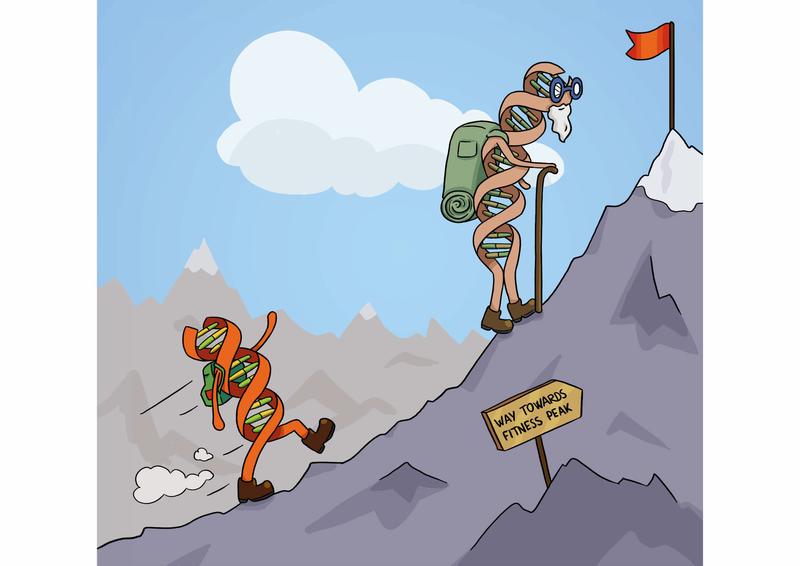