Home > Pressemitteilung: Gut microbes and humans on a joint ...

Gut microbes and humans on a joint evolutionary journey

The human gut microbiome is composed of thousands of different bacteria and archaea that vary widely between populations and individuals. Scientists from the Max Planck Institute for Biology in Tübingen have now discovered gut microbes that share a parallel evolutionary history with their human hosts: the microorganisms co-evolved in the human gut environment over hundreds of thousands of years. In addition, some microbes exhibit genomic and functional features making them dependent on their host. Now published in Science, the researchers present the results of their study conducted with data from 1225 individuals out of Africa, Asia and Europe.

Linking the histories of microbes and humans

The research team conjectured that specific species and strains have been with people as humanity diversified and spread over the globe. To test if microbes evolved and diversified simultaneously with their human hosts, researchers from the Max Planck Institute for Biology, the Institute for Tropical Medicine, and the Cluster of Excellence CMFI at the University of Tübingen systematically compared for the first time the evolutionary histories of humans and of gut microbes. The researchers created phylogenetic trees for 1225 human study participants as well as for 59 microbial species found within their guts, and used statistical tests to investigate how well these trees match. Over 60% of the investigated species matched with the evolutionary history of their human host, meaning that these microbes co-diversified over ~100,000 years in the human gut when people fanned out of Africa across the continents. “We didn`t know that any of our gut microbes followed our evolutionary history this closely”, marvels Ruth Ley, head of the department for Microbiome Science at the Max Planck Institute for Biology, Tübingen, where the study was conducted, and deputy spokesperson of the CMFI.

“It is also remarkable that the strains that followed our history most closely are now those who rely most on the gut environment,” Ley adds. Indeed, some of the microbe strains that evolved together with humans are heavily dependent on the human gut environment: they possess smaller genomes and are more sensitive to oxygen levels and temperature – traits making it difficult to survive outside the human body. In contrast, microorganisms that showed weaker association with the human history showed more characteristics similar to free living bacteria. “Some of the gut microbes behave like they are part of the human genome”, explains Taichi Suzuki, who shares main authorship of the study with his colleague Liam Fitzstevens. Suzuki adds: “You can imagine that those microbes are on a gradient from ‘free-living’ to reliant on the human body environment. We have seen that some human gut bacteria are further along the gradient towards irreversible host dependence than previously thought.” Ley further states: “This fundamentally changes how we view the human gut microbiome.”

To obtain data from a diverse subset of the global population, the research team analyzed the gut microbes and genomes of 1225 individuals in Europe, Asia, and Africa. The stool and saliva samples were collected with the help of researchers from the Institute for Tropical Medicine at the University of Tübingen and their partners in Vietnam and Gabon. In addition, researchers around the globe supported the study by providing similar datasets from participants recruited in Cameroon, South Korea, and the UK.
The findings of the study help to further understand population-specific microbes that have long been associated with the local human population. With this knowledge, microbiome-based therapies of diseases can be adapted and refined to a population-specific treatment.

<
"Migration". Gut microbes spred over the globe with their human hosts. 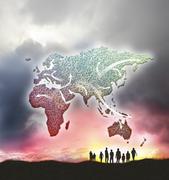 <
"Sunset". Gut microbes spred over the globe with their human hosts.

<
"Migration". Gut microbes spred over the globe with their human hosts.

<
"Sunset". Gut microbes spred over the globe with their human hosts.

"Migration". Gut microbes spred over the globe with their human hosts. 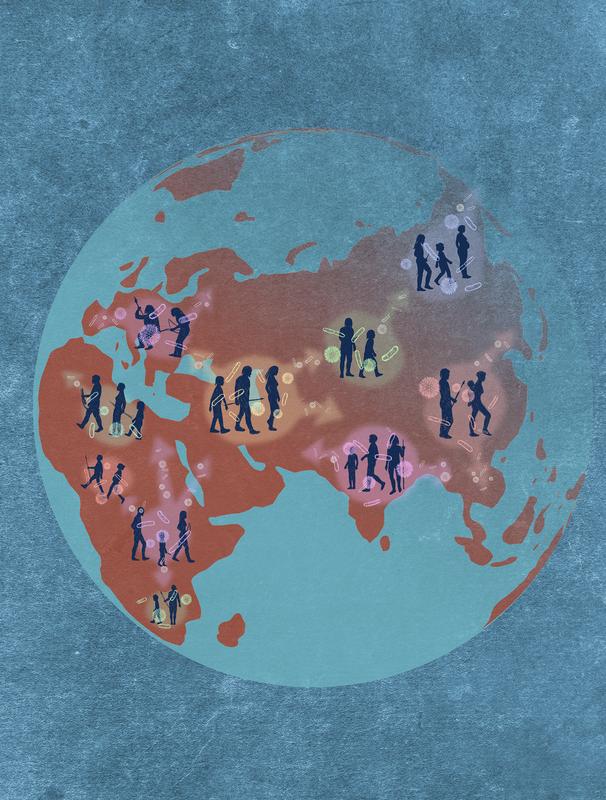 "Sunset". Gut microbes spred over the globe with their human hosts. 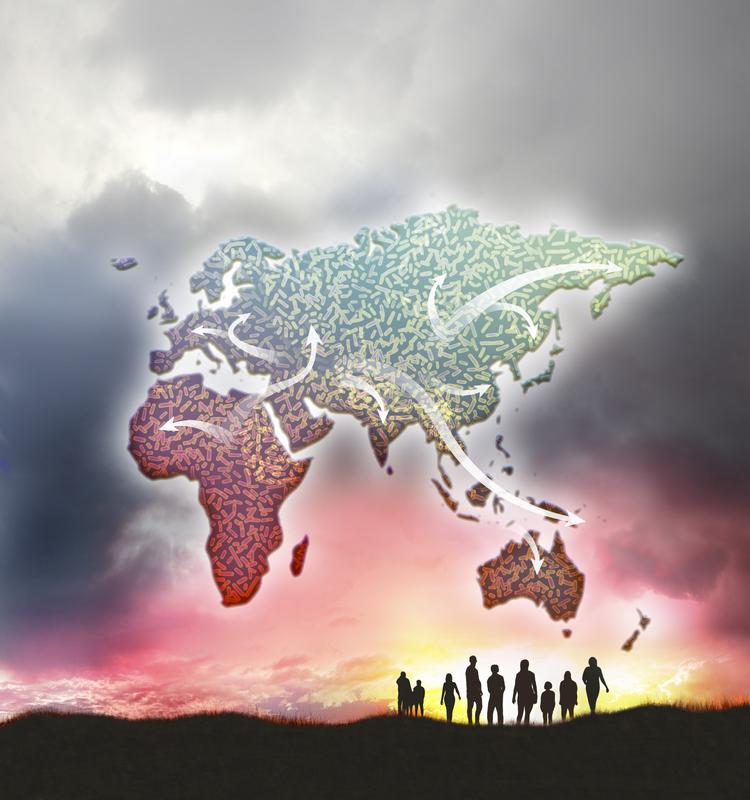