If everything is to run smoothly in living cells, the genetic information must be correct. But unfortunately, errors in the DNA accumulate over time due to mutations. Land plants have developed a peculiar correction mode: they do not directly improve the errors in the genome, but rather elaborately in each individual transcript. Researchers at the University of Bonn have transplanted this correction machinery from the moss Physcomitrium patens into human cells. Surprisingly, the corrector started working there too, but according to its own rules. The results have now been published in the journal "Nucleic Acids Research".

In living cells, there is a lot of traffic like on a large construction site: In land plants, blueprints in the form of DNA are stored not only in the cell nucleus, but also in the cell’s power plants (mitochondria) and the photosynthesis units (chloroplasts). These blueprints contain building instructions for proteins that enable metabolic processes. But how is the blueprint information passed on in mitochondria and chloroplasts? This is done by creating transcripts (RNA) of the desired parts of the blueprint. This information is then used to produce the required proteins.

However, this process does not run entirely smoothly. Over time, mutations have caused errors to accumulate in the DNA that must be corrected in order to obtain perfectly functioning proteins. Otherwise, the energy supply in plants would collapse. At first glance, the correction strategy seems rather bureaucratic: instead of improving the slip-ups directly in the blueprint - the DNA - they are cleaned up in each of the many transcripts by so-called RNA editing processes.

Compared to letterpress printing, it would be like correcting each individual book by hand, rather than improving the printing plates. "Why living cells make this effort, we do not know," says Dr. Mareike Schallenberg-Rüdinger of the Institute of Cellular and Molecular Botany (IZMB) at the University of Bonn. "Presumably, these mutations increased as plants spread from water to land during evolution."

In 2019, the IZMB team led by Prof. Dr. Volker Knoop succeeded in transplanting RNA editing processes from the moss Physcomitrium patens into the bacterium Escherichia coli. It was shown that the repair proteins of the moss can also modify the RNA of these bacteria.

Now, researchers from the Institute of Cellular and Molecular Botany, together with the team led by Prof. Dr. Oliver J. Gruss from the Institute of Genetics at the University of Bonn, have gone one step further: They transferred the RNA editing machinery from the moss into standard human cell lines, including kidney and cancer cells, for example. "Our results showed that the land plant correction mechanism also works in human cells," reports first author Elena Lesch. "This was previously unknown."

But that's not all: the RNA editing machines PPR56 and PPR65, which only act in mitochondria in the moss, also introduce nucleotide changes in RNA transcripts of the cell nucleus in human cells.

Surprisingly for the research team, PPR56 makes changes at more than 900 points of attack in human cell targets. In the moss, on the other hand, this RNA corrector is only responsible for two correction sites." There are many more nuclear RNA transcripts in human cells than mitochondrial transcripts in the moss," explains Dr. Mareike Schallenberg-Rüdinger. "As a result, there are also many more targets for the editors to attack." Although the editors follow a particular code, at this stage, it is not yet possible to accurately predict where the editing machines will make changes in human cells.

However, the abundance of RNA editing targets in human cells also offers the opportunity to find out more about the basic mechanisms of the correctors in further studies. This could be the basis for methods of inducing a very specific change in RNA in human cells by means of a corrector. "If we could correct faulty sites in the genetic code with RNA editing methods, this would potentially also offer starting points for the treatment of hereditary diseases," says Schallenberg-Rüdinger, looking to the future. "Whether that will work remains to be seen."

The study was funded by the German Research Foundation (DFG) and the University of Bonn.

The editor PPR56, which only acts in mitochondria in the moss, edits more than 900 different positions in nuclear transcripts in human cells. 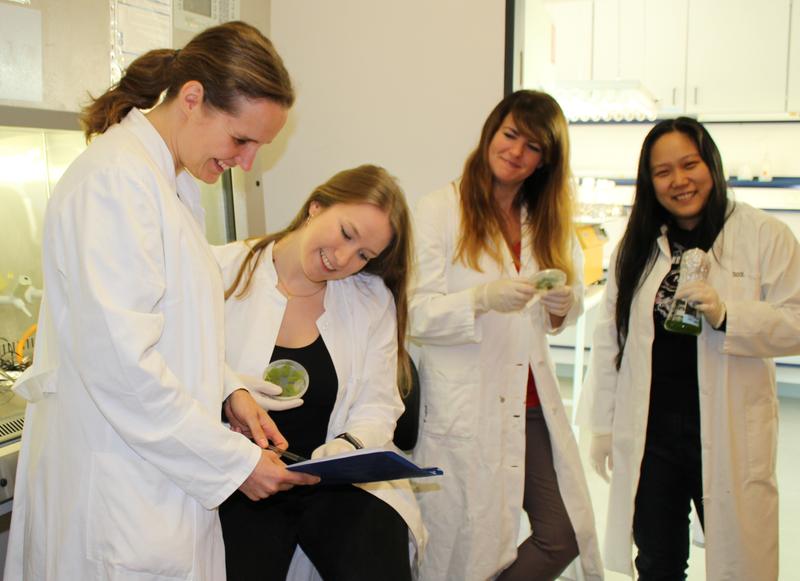