The control of RNA metabolism is crucial to the regulation of animal longevity, researchers from the Max Planck Institute for Biology of Ageing in Cologne have now discovered. They found that worms live longer when certain RNAs are processed differently during RNA maturation. This could be an additional way for organisms to control the ageing process.

RNA is an important transmitter of information in our cells and serves as a blueprint for the production of proteins. When freshly formed RNA is processed, so-called introns are cut out to produce the mature mRNA coding for protein. This cutting is called "splicing" and is controlled by a complex called the "spliceosome".

"We found a gene in worms, called PUF60, that is involved in RNA splicing and regulates life span," says Max Planck scientist Dr. Wenming Huang who made the discovery. Mutations in this gene caused inaccurate splicing and the retention of introns within specific RNAs. Consequently, lower amounts of the corresponding proteins were formed from this RNA. Surprisingly, worms with this mutation in the PUF60 gene lived significantly longer than normal worms.

"We think that by altering the fate of introns in RNAs, we have discovered a novel mechanism that regulates mTOR signalling and longevity," says Max Planck Director Adam Antebi who led the study. "Interestingly, there are also human patients with similar mutations in the PUF60 gene. These patients have growth defects and neurodevelopmental disorders. Perhaps in the future, these patients could be helped by administering drugs that control mTOR activity. But of course, this needs more research."

The research for this study was conducted at the Max Planck Institute for Biology of Ageing and was funded by the CECAD Cluster of Excellence for Aging Research.

<
The roundworm Caenorhabditis elegans is an important model organism in ageing research. The worm in ...

<
The roundworm Caenorhabditis elegans is an important model organism in ageing research. The worm in ...

The roundworm Caenorhabditis elegans is an important model organism in ageing research. The worm in the image is labelled with GFP::RNP-6. 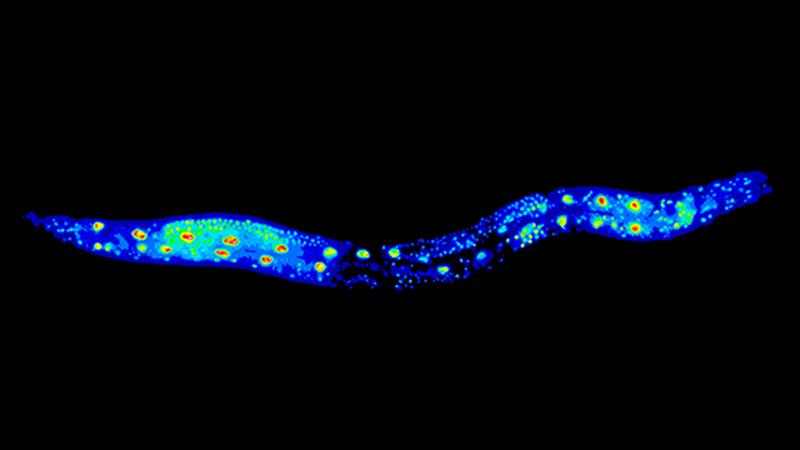