Over twenty years ago, ‘Atmospheric Chemistry and Physics’ (ACP) was launched as the first of now 19 open access journals with transparent peer review by the European Geosciences Union (EGU). Since then, more than 40,000 peer-reviewed papers and 48,000 preprints or discussion papers were published in the journals and their interactive discussion forums. The scientific articles received nearly 180,000 public comments by editors, reviewers and other members of the scientific community.

Mid-September, ACP editors, the EGU Publications Committee and representatives of their publisher Copernicus met to celebrate the outstanding achievements of their publications. The approximately 50 participants had traveled to the Max Planck Institute in Mainz from as far away as Brazil, USA, Mexico, and China to discuss new ideas for greater visibility and accessibility of open access publications including free speech, critical discussion and transparency.

After more than 20 years of service, Ulrich Pöschl and Thomas Koop officially stepped down as ACP Executive Editors. In the years 2000/2001 they created the journal together with Ken Carslaw and Rolf Sander, then all affiliates or alumni of the Max Planck Institute, and Bill Sturges from the University of East Anglia, UK. Barbara Ervens (CNRS & University of Clermont-Ferrand, France) and Ken Carslaw (University of Leeds, UK) will continue as Co-Chief Executive Editors.

“It has been a great pleasure to design and develop our new approach of scientific exchange and quality assurance with a highly diverse team of colleagues from all over the world”, says Uli Pöschl. “The interactive open access approach of ACP and EGU provides the basis for an epistemic web openly displaying and tracing both what we know and how we know it, i.e., how the published scientific knowledge has been validated by public review and discussion according to the principles of critical rationalism.”

The EGU journals have been recently complemented by the repository EGUsphere that offers an even wider variety of options for scientific exchange and publication by combining the established openly discussed journal submissions (discussion papers) with classical preprints and conference abstracts. Exceeding the features of traditional preprint servers, EGUsphere also serves as a discussion forum that allows the quick publication of initial ideas as preprints, involvement of the scientific community by commenting on these papers and the seamless transition of such papers for consideration as journal articles as final peer reviewed publications.

A virtual collection or magazine of interdisciplinary highlight articles from all journals will be set up soon under the title ‘EGU Editors’ Choice’, compiling concise articles that report on major advances in geosciences or present agenda-setting and provocative viewpoints of highest interest to the geoscience community and broader public. Beyond this virtual collection, the EGU Publications Committee also discussed the perspectives of a separate new highlight journal under the working title ‘EGU Letters’. Moreover, EGU also offers the ‘Encyclopedia of Geosciences’, which is a virtual collection of peer-reviewed scientific review articles on topics relevant to the geosciences, written by the experts of the field and published in the EGU open access journals.

"The EGU publications successfully grow not only in number of journals and papers, but also by widening the variety of publication platforms such as EGUsphere and the virtual highlight collection. Such development and implementation of innovative features distinguishes the EGU publications from their competitors from the beginning, when the open peer review and interactive discussion concept was first introduced”, says Barbara Ervens, Co-Chief Executive Editor at ACP and Chair of the EGU Publications Committee.

All EGU publications are operated by the scientific service provider and pure open access publisher Copernicus on behalf of EGU. Hundreds of journal editors, thousands of reviewers and about 50 EGUsphere preprint moderators provide volunteer services to ensure scientific quality and integrity of the publications, in line with the not-for-profit philosophy of the EGU.

Yafang Cheng, Senior Editor at ACP, says: “For over 20 years, ACP has always been a journal that is from the community and for the community, as a group-effort of like-minded scientists sharing the same dream of better scientific communication. We pursue this approach with a globally distributed network of over 160 co-editors in close exchange with thousands of authors, reviewers, commenters, and readers.”

In the development and launch of ACP, Paul Crutzen, Nobel Prize awardee and former director at MPIC, played an essential role. Honoring his contributions, this year the newly established annual "ACP Paul Crutzen Publication Award" was presented for the first time at this meeting to recognize authors of an outstanding ACP publication that was selected by an independent commission. Christoph A. Keller (NASA) and coauthors received the 2021 award for their publication “Global impact of COVID-19 restrictions on the surface concentrations of nitrogen dioxide and ozone”.

Ken Carslaw says: “Paul Crutzen played such a critical role in getting the journal off the ground 20 years ago, so we are proud to be able to honor his contribution to ACP’s success with the journal’s first publication award. We are also grateful to the independent commission, led by Prof Annica Ekman from Stockholm University, for selecting the paper from nearly one thousand articles published in 2021.” 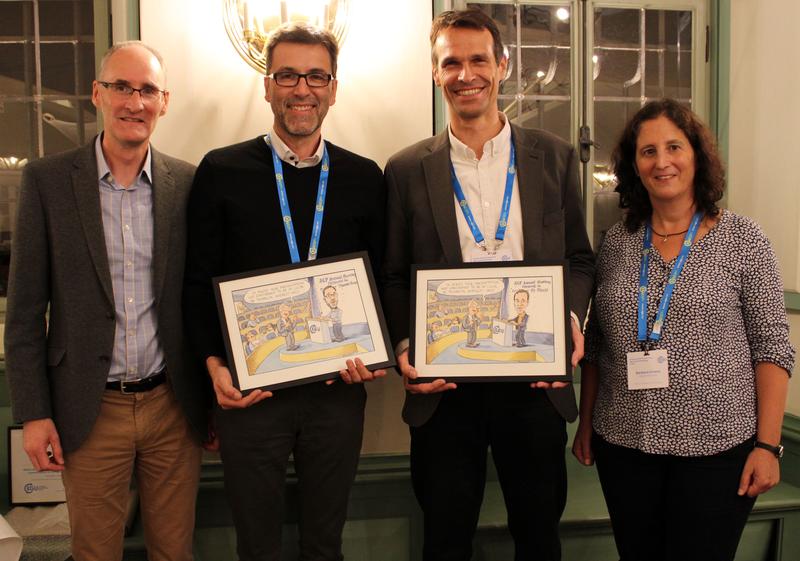 Joint group picture of the editors of the scientific journal "Atmospheric Chemistry and Physics" (ACP) together with the Publications Committee of the European Union of Geosciences (EGU).