Home > Pressemitteilung: To be heavy or not - that is the question

To be heavy or not - that is the question

If you need to lurk at the bottom of a water body waiting for prey, it is wise to stay motionless without resisting against the buoyant forces of water. To do so you need a kind of diving belt that helps to sink. One large amphibian species Metoposaurus krasiejowensis, that lived more than 200 million years ago, compensated for buoyancy with a heavy shoulder girdle. Researchers from the Universities of Bonn and Opole (Poland) examined the bones of the girdle under a microscope. The compactness in the interclavicle shows a striking resemblance to the pectoral bones of modern manatees. The results are now published in the Journal of Anatomy.

Between 225 and 215 million years ago, lived a large temnospondyl amphibian species in floodplains in southwestern Poland: Metoposaurus krasiejowensis. In addition, another, even larger Temnospondyli species, Cyclotosaurus intermedius and a crocodile-like reptile species known as phytosaurs coexisted with the metoposaurs. Metoposaurids are amphibians that evolved 300 million years ago. "Some researchers believe that modern frogs, toads and salamanders could be descendants of these temnospondyli," says first author Sudipta Kalita, a research assistant in paleontology at the Institute of Geosciences at the University of Bonn, Germany. Metoposaurids are strikingly different from other Temnospondyli species because of their large rounded skull tops, massive shoulder bones and small pelvic girdle with small legs.

In the early 1900s, German paleontologist Eberhard Fraas first speculated that metoposaurids lived as bottom-dwellers in shallow freshwater ecosystems. His assumption was based on the large shoulder bones of these animals, which facilitated their sinking. A similar strategy is used by modern manatees. They use the weight of their breast bones to submerge themselves in their shallow coastal habitat to graze on seagrass underwater.

Big bones don't have to be heavy

"A big bone doesn't have to be heavy," says the senior author Dr. Dorota Konietzko-Meier of the University of Bonn's Department of Paleontology. "The density of the bone being crucial for understanding such an adaptation." Like lead weights in diving, heavy bones facilitate descent. Otherwise, a lot of muscle energy would have to be used to compensate for resisting buoyancy through paddling movements while diving.

Eberhard Fraas' conjecture raises the question of whether the shoulder bones of metoposaurids were actually heavy. Researchers from the Institute of Geosciences at the University of Bonn examined the internal microstructure of the bones for the first time to see whether there was actually a lot of bone mass there. They focused on two questions: did the shoulder bones of Metoposaurus contribute to its underwater bottom-dwelling lifestyle? Did young and old metoposaurids occupy different niches at different water depths?

Pixel-counting software calculated the compactness of the bones

To test these hypotheses, the researchers cut open the two giant elements of the shoulder girdle: the clavicles and the interclavicle – a bone located between the paired clavicles. They took very thin sections from these bones and examined them under a microscope. These sections were then scanned and converted into black-and-white images. Using this data, a pixel-counting software calculated the percentage of compactness.

As a bone grows in size, so do the pores inside nullifying the added weight due to bone growth. These pores provide blood and oxygen supply to the bones when the animals are alive. However, the researchers found that the interclavicles of Metoposaurus krasiejowensis still contained a lot of bone, even in the largest of specimens. "This suggests that the compactness of the bone at some locations within the interclavicles bears a striking resemblance to the compactness of the thoracic bones of modern manatees," Kalita reported. Unlike Metoposaurus, this was not observed in Cyclotosaurus.

The researchers interpreted the results to mean that the interclavicles helped with sinking and allowed Metoposaurus to lead an underwater bottom dwelling lifestyle. "This interpretation supports the conjecture of Fraas and later paleontologists who described Metoposaurus as a bottom dwelling ambush predator," emphasized Dr. Dorota Konietzko-Meier. "Moreover, young and old metoposaurs did not live at different depths of the waters, but in the same underwater ecosystem close to the substrate," said Elżbieta M. Teschner of the University of Opole. Considering the heavy interclavicles, the researchers assume that this animal only surfaced to catch its breath. It then slowly sank into the depths to wait for prey. Unlike the metoposaurid, Cyclotosaurus may have lived closer to the water surface like modern crocodiles and alligators.

The University of Opole (Poland) provided access to the samples. The Polish National Science Center (NCN) supported the study. The University of Bonn provided facilities to extract data from samples, academic support to first and second coauthors and other technical support necessary to complete this research.

Kalita, S., Teschner, E.M., Sander, P.M. & Konietzko-Meier, D.: To be or not to be heavier: the role of dermal bones in the buoyancy of the Late Triassic temnospondyl amphibian Metoposaurus krasiejowensis. Journal of Anatomy, DOI: https://doi.org/10.1111/joa.13755

<
Thin section images of Metoposaurus interclavicles: The scale bar at the side is used to compare the ...

<
Thin section images of Metoposaurus interclavicles: The scale bar at the side is used to compare the ... 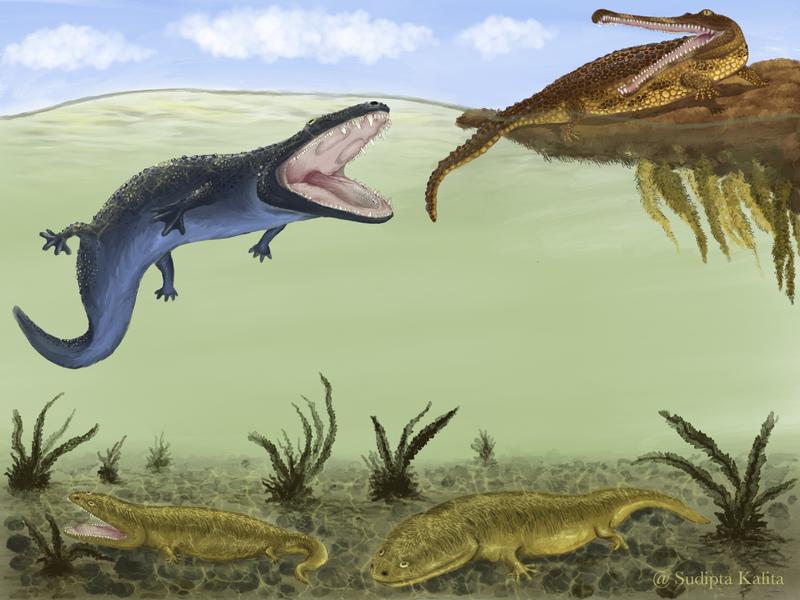 Thin section images of Metoposaurus interclavicles: The scale bar at the side is used to compare the thickness at different locations; inside D stands for dorsal (towards the back) and V for ventral (towards the belly). 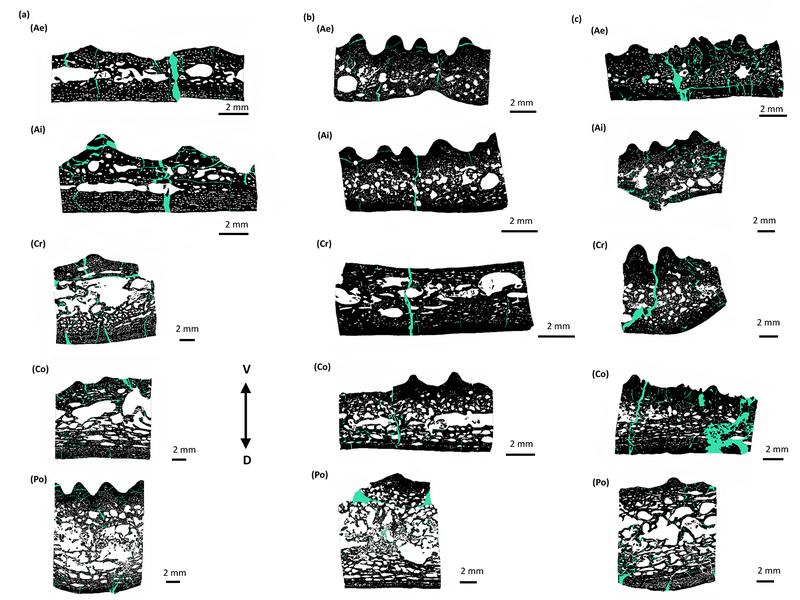