Layers of gene control allow DNA to flexibly add new information. Genes and their genetic switches are organized into functional units to turn genes on or off just as needed. Disrupting these units can lead to disease, but a new study makes clear that they are more robust and flexible than previously thought. An international team of researchers found that a gene may still function even when new DNA segments get inserted in the same genomic organizational unit.

Two meters of DNA are stuffed into the tiny nucleus of each human cell. To provide the cell with the right information at the right time, the DNA molecule is packed and bundled efficiently into functional units. Genes usually gather with their control sequences to build physically separated working spaces. But what happens when these units get disturbed during evolution – or in the genome of an individual patient?

“Some of the genomic rearrangements we see in the clinic cause disease, while others do not”, says Stefan Mundlos of Charité – Universitätsmedizin Berlin and head of the research group Development & Disease at the Max Planck Institute for Molecular Genetics (MPIMG). “We still don’t fully understand why this is the case.”

In fact, many parts of the genome contain regulatory conflicts. A new study published in the scientific journal Cell gives the first hints how they are resolved. Mundlos’ team of researchers studied an example where a new gene has been successfully integrated into the genome without disturbing the preexisting control mechanisms of neighboring genes. The team hoped that this could also be used to draw conclusions about similar circumstances in the cells of patients.

The researchers explored a mutation that happened in the ancestor of all placental mammals, a group that includes humans, but not marsupials like the opossum. The mutation inserted the new gene Zfp42 right into the workspace of the important developmental gene Fat1, a gene that is involved in the growth and migration of cells. “We found that cells cope with the unwanted guest with two separate mechanisms, depending on the situation when the genes are needed”, says Michael Robson, who led the project. “In certain tissues, the new gene is silenced epigenetically and switched off completely. During early development of the embryo, however, both genes are active and the cell rebuilds this part of the genome into new functional units that allows individual control.”

A newcomer in the workshop

Robson, his PhD student Alessa Ringel, and their colleagues investigated the organizational workspace of Fat1. Like many other genes, it is instructed to turn on in specific times and places by other DNA sequences called enhancers. To allow enhancers and genes to communicate, DNA then folds and bends to bring them together into a sheltered working space. These functional working units of DNA are called topologically associated domains (TADs).

In chickens or opossums, only the Fat1 gene is located in the same TAD as its enhancers. When the researcher employed the “Hi-C” technique to see which parts of DNA most frequently touch each other, the gene and its enhancer behaved as expected. In these animals, the DNA seemed to curl up into a single ball, allowing both genetic sequences to intermingle, thereby activating Fat1.

“But in placental mammals like mice or humans it is a little more complicated”, explains Ringel, who is first author of the publication. Right in between the Fat1 gene and its enhancer, there is this new gene called Zfp42. The same enhancer should control both genes, but this is not the case. “Both genes seem to get along just fine – they have completely independent behavior, becoming active in different tissues at different times of development.“

Either go to sleep or rebuild your workspace

To get to the bottom of the question of how the genes manage to avoid each other, the researchers compared cells from different mouse tissues: the developing embryonic limb and embryonic stem cells.

From these studies, the researchers learned that in embryonic limbs the enhancer indeed contacts both genes – but Zfp42 remains inactive. As it turns out, the newcomer is still in the same workspace but is quietly sleeping in a corner. The gene had been silenced by DNA methylation, a chemical modification that locks genes in an off-state. But in order to put the Zfp42 gene to sleep, it needs to be exactly at the right place. As soon as the researchers experimentally cut-and-pasted it just a little to either side, it got activated by Fat1’s enhancer.

The scientists were surprised to find that in the cells of the mouse embryonic stem cells, the DNA around the two genes is organized completely differently. Zfp42 and Fat1 now build their own physically separate workspaces with their own respective enhancers.
The original TAD splits into smaller DNA blobs to separate the two genes. This was apparent not only from Hi-C experiments that mapped the contact points between DNA segments, but also from highly-resolving microscopic imaging and computer models which showed that each gene established its own little workspace.

A robust and flexible system of genetic control

These two novel mechanisms reveal how a single DNA “workspace” can be readily modified to host entirely different gene activities. “It is fascinating to study how different layers of gene control complement each other”, says Ringel. “We have been surprised by the flexibility of our genomes to adapt and control genes in different situations. For instance, our results show that TADs can have dynamic rather than static DNA structures.”

The TAD of the Fat1 gene has been stably maintained for hundreds of millions of years of evolution from fish and frogs to marsupials, project leader Robson adds. “TAD workspaces at first seem fragile as so much can go wrong if they get disturbed”, he says. “But new genes have to go somewhere and we show how evolution can effectively modify regulatory domains to safely add new genes and functions.”

“Interestingly, this evolutionary setting mirrors what we often see in patients with extreme genomic alterations like chromothripsis”, says Mundlos. “These patients can have shattered chromosomes but still have only relatively mild symptoms. This could be explained through these additional regulatory mechanisms that compensate for harmful effects by using the tools the genome has at its disposal.”

: Artist’s impression of a disassembled organizational unit of DNA, a topologically associating domain (TAD). In the data analysis, these domains appear as triangles that can be restructured in different tissues. 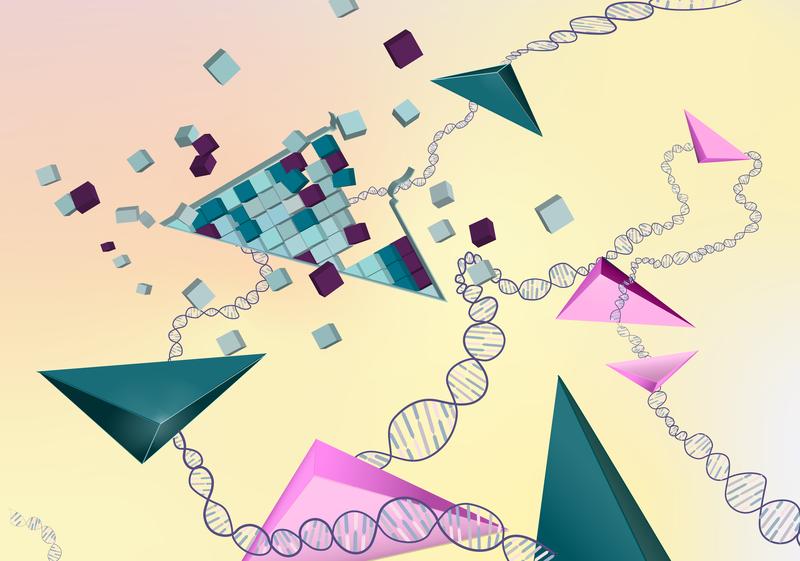