A well-functioning immune system is essential for protection against infections. However, with increasing age, the functioning of the immune system diminishes, which is also due to age-related damage in hematopoietic (blood) stem cells. Researchers at the Leibniz Institute on Aging – Fritz Lipmann Institute (FLI) in Jena, Germany, have now discovered how the co-activator of the Hippo signaling pathway, the TAZ protein, can protect hematopoietic stem cells from aging and thus prevent them from loss of function. Moreover, hematopoietic stem cells age very heterogeneously. In addition to old cells, one can also find “youthful” cells when the protective mechanism has worked effectively.

Jena. Our blood is constantly being regenerated from hematopoietic stem cells (HSCs). With increasing age, however, these blood stem cells experience a loss of function and their regenerative potential diminishes. In older people, there is another problem with blood formation (hematopoiesis): they form fewer lymphocytes (cells of the immune system), so they are often no longer able to cope as well with infections and usually do not show a highly effective immune response after a vaccination.

There are already numerous indications that these deficiencies associated with old age result primarily from age-related damage in the blood stem cells. How this damage occurs, and whether there are protective mechanisms that could possibly protect the blood stem cells from it, is not yet known. In a study recently published in Nature Communications, researchers from the Leibniz Institute on Aging – Fritz Lipmann Institute (FLI) and Jena University Hospital in Jena, Germany; Harvard University in Cambridge, Massachusetts; and ERIBA in Groningen, the Netherlands, have now used novel analytical methods at the single cell level to investigate in more detail what happens during the aging process in hematopoietic stem cells and what role the TAZ protein plays in this process.

The adult body replaces billions of cells every day; in this process, existing cells are continuously replaced by “new” cells. “Maintaining the balance between cell division, cell differentiation and cell death is tremendously important, because even the smallest imbalances disturb this equilibrium and sooner or later contribute to the development of cancer or can lead to premature aging,” explains Dr. Björn von Eyss, head of the research group “Transcriptional Control of Tissue Homeostasis” at the FLI.

The Hippo signaling pathway inhibits the activity of proteins such as YAP (Yes-associated protein) and TAZ (transcriptional co-activator with PDZ-binding motif). These are proteins that control the copying of certain genes on DNA into messenger RNA (mRNA) – a process called transcription. Recent studies have shown that YAP and TAZ are also essential for the regeneration of tissues in the intestine or liver, helping cells to better cope with stress from tissue damage by reprogramming them into a more primitive state.

“Given their important role in regeneration, we analyzed gene expression in the hematopoietic stem cells of young and old mice and tested which genes are upregulated or downregulated with aging,” reports KyungMok Kim, a doctoral student in the lab of Dr. Björn von Eyss. “We found that genes in cells change with aging. In the cells of the old mice, the TAZ protein was more strongly induced as a co-activator of the Hippo pathway, and several hundred genes were upregulated.” The most striking aging-related change occurred in the Clca3a1 gene, so the researchers used this TAZ-induced gene as a sensitive marker for their further studies.

Interestingly, the gene product CLCA3A1 is a protein that is found on the surface of cells and induced by the TAZ protein. Using antibodies against CLCA3A1, von Eyss’s research group succeeded in identifying a specific population of cells expressing high or low levels of CLCA3A1. By using special single-cell methods, such as single-cell RNA-Seq or single-cell ATAC-Seq, in the Institute’s Core Facility “Sequencing,” it was also possible to trace TAZ activity in each individual cell at the cellular level and to monitor it directly in vivo.

The researchers thus found that blood stem cells do not age uniformly. Rather, they are very heterogeneous and exhibit mixed populations. Thus, it was possible to isolate subpopulations from old mice in which the cells were predominantly old, but also populations in which the cells were in a “youth-like” state. The gene expression pattern of these cells also tended to resemble those of young hematopoietic stem cells. This is an indication that TAZ can to some extent counteract the gradual loss of stem cell function and protect blood stem cells by rejuvenating them. Consequently, genetic downregulation of TAZ in old HSCs resulted in a drastic failure to restore the blood system upon transplantation of these HSCs.

“Our new findings open up completely new perspectives for making stem cells fitter again,” says KyungMok Kim, summarizing the study’s research findings. “On the one hand, if we succeed in selectively filtering out the old from the younger blood stem cells and isolating them from the body, we could use them to push the immune system and make it significantly more active again.” This approach to rejuvenating stem cells will be studied in more detail in a follow-up project funded by the Leibniz Association.

“On the other hand, the results could help us to better understand why we age so differently and why there are differences between biological and chronological age," adds Dr. Björn von Eyss. Although cells are chronologically all the same age, they still age differently.

If the epigenetic clock does not tick the same way in all cells of the body, however, this could explain the resulting differences in the biological age of the cells. Epigenetics describes chemical markers on the genome that do not influence the sequence of DNA building blocks, but determine how and which genes are read. This type of information is also passed on when cells divide and change with aging. Cell heterogeneity – as shown in this study in hematopoietic stem cells – could potentially result from different epigenetic markers in the subpopulations. Functional understanding of these markers in hematopoietic stem cells could thus provide clues to the process of aging and to the diseases associated with it.

Hematopoietic stem cells age very heterogeneously. The TAZ protein, a co-activator of the Hippo signaling pathway, can protect blood stem cells from aging. Thus, in addition to old cells, one also finds “youthful” cells when the protection has worked. 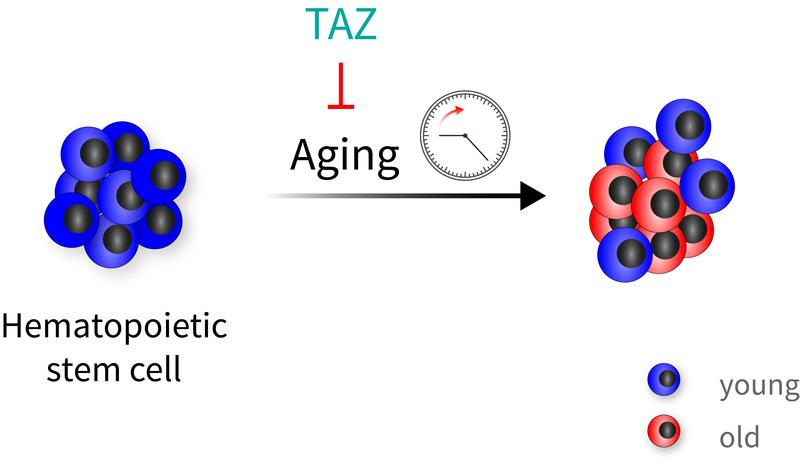