Martinsried. Researchers discovered that prions, which are naturally occurring protein clumps in yeast, are involved in the toxicity of the disease-related protein Huntingtin. They found that the actual toxic form of the Huntingtin protein is not large aggregates, as previously suspected, but smaller intermediates, so-called oligomers. Those intermediates arise through specific interactions with prions. The researchers now suspect similar relationships in human disease. The study was published in the journal Molecular Cell and is an achievement of the team led by Ulrich Hartl at the Max Planck Institute of Biochemistry (MPIB).

Neurodegenerative diseases like Alzheimer’s, Parkinson’s or Huntington’s disease are characterized by the deposition of protein clumps, so-called protein aggregates, in the brains of patients. Even though disease-relevant proteins – such as the Huntingtin protein in Huntington’s disease – are present in all cells of the human brain, aggregates of Huntingtin form in a specific region of the brain during the initial stage of the disease. A recent study by the group of Ulrich Hartl from the Max Planck Institute of Biochemistry investigates the influence, that the cell type has on this preference of aggregate formation in a distinct brain region. The study has been published in the scientific journal Molecular Cell. To address this phenomenon, the researchers performed experiments in a yeast model system.

Possible implications for human disease
In recent years, many human proteins have been characterized that share similarities with the prions in yeast. A bioinformatic analysis of previously published data sets from mouse models and human cell cultures showed that mammalian proteins with such prion-like characteristics preferentially accumulate in neurons. With the increasing age of an individual, they tend to form aggregates. The authors of the study suspect that the aggregates of these prion-like proteins can in turn force the aggregation of disease-relevant proteins, such as Huntingtin, in certain brain areas and thus contribute to the disease progression in neurodegenerative disorders. Further investigation of this hypothesis is still ongoing.

<
Illustration of yeast cells during the illumination with blue light

<
Illustration of yeast cells during the illumination with blue light

Illustration of yeast cells during the illumination with blue light 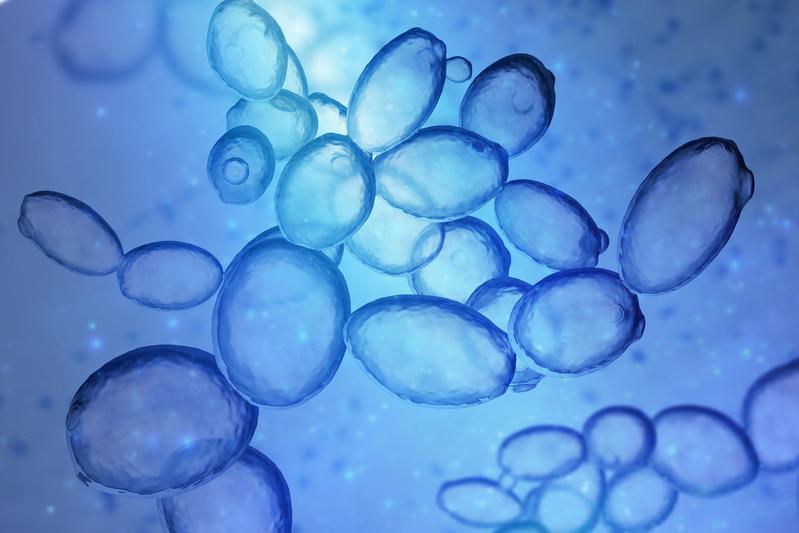