In a largely neglected brain region, scientists identified neurons that produce the stress hormone CRH (corticotropin-releasing hormone). They showed that the CRH produced in this region plays a role in behavioral arousal, locomotor activation, and avoidance behavior. The findings could be important for the understanding of psychiatric diseases.

Jan Deussing, research group leader at the Max Planck Institute of Psychiatry (MPI), and his team have identified a region in the brain of mice where neurons produce the stress hormone CRH. This so-called IPACL region (lateral interstitial nucleus of the posterior limb of the anterior commissure) has been largely ignored by scientists until now. It is part of the extended amygdala – a brain region central to behaviors such as fear. The role of CRH originating from this part of the brain was previously unknown. By contrast, it is known that CRH originating from the hypothalamus brain region is a component of the stress axis, which leads to the release of the stress hormone cortisol. "We wanted to know why the IPACL neurons produce CRH. We used mice as a model system because the brain regions are similar to those of humans. We genetically modified mice which enabled us to specifically stimulate the IPACL neurons," Deussing explains.

Three structures in the brain involved in CRH circuit

The terminals of the IPACL neurons innervate the substantia nigra (SN) within the midbrain. This region is important for movement. For example, the SN is one of the first regions to degenerate in Parkinson's disease. Jan Deussing’s team suspected that the CRH of the IPACL neurons acts on cells in precisely this region. They therefore genetically modified their mice such that the CRH receptor was only switched off in the SN. However, after stimulation of the IPACL neurons, these mice continued to display increased exploratory behavior. This puzzled the team. "Next, we focused on neurons of the external part of the globus pallidus region (GPe). These neurons contain many CRH receptors and their nerve terminals also terminate in the SN. Usually, the CRH receptor is located on the body of the neurons and on their dendrites, but in GPe neurons it is located on the nerve terminals," Deussing says. The team switched off the receptor in GPe neurons. As a result, the rodents no longer displayed increased exploratory behavior after stimulation of the IPACL neurons. Thus, the researchers concluded that the CRH in the IPACL neurons mediates its effects through GPe neurons. "We were able to reveal for the first time a CRH circuit in the IPACL, SN and GPe brain regions that plays a role in movement activation and avoidance behavior," Deussing concludes.

The results, which were recently published in “Science Advances”, could be relevant for the understanding of psychiatric diseases. In anxiety disorders, post-traumatic stress disorder or depression, responses such as arousal and avoidance behavior may be impaired. "It is possible that the CRH circuit we discovered controls some of this behavior," speculates Deussing.

CRH neurons in the IPACL region produce a red fluorescent protein that enables visualization. If CRH neurons are connected to the substantia nigra in the midbrain, retrograde labeling additionally stains them green. 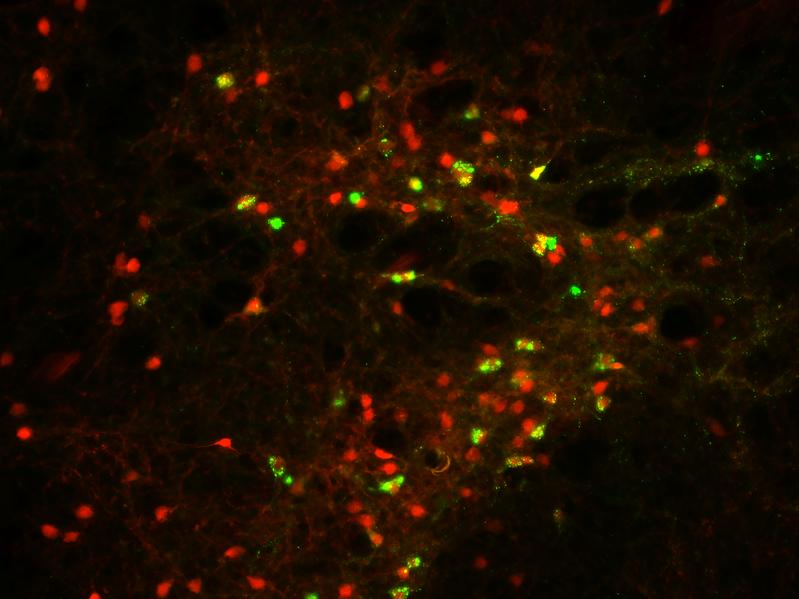