Genetically modified and attenuated measles vaccine viruses are considered a promising platform for research and development of vector vaccines and oncolytic measles viruses. The biotechnological production of these viruses is difficult, because it requires a precisely coordinated interaction of the necessary components to form self-replicating virus particles. A team of researchers at the Paul-Ehrlich-Institut has succeeded in developing a two-component system in which all components needed are provided in their required proportions. The Journal of General Virology reports on the results in its online edition from 28 November.2022.

The best protection against measles infection is vaccination. Vaccines use attenuated, non-hazardous measles viruses that still replicate to a limited extent but cannot cause any disease. The measles vaccination is one of the most effective and longest-lasting vaccinations known. The exact reason why measles vaccine viruses provide such excellent protection, however, is still unclear in some detail. The targeted genetic modification of vaccine viruses, such as the introduction of a marker gene coding for a fluorescent protein, can assist researchers in basic research to better understand the properties of these live-attenuated viruses.

The (potential) applications go indeed much further. Genetically modified measles vaccine viruses provide an interesting platform technology for the design of viral vector vaccine candidates for protection against various diseases. Another potential application of biotechnologically produced, i.e. recombinant, measles viruses is the treatment of cancer. Such treatment would involve a type of virus known as an oncolytic virus, which specifically targets and kills cancer cells. However, the method of producing genetically modified, recombinant measles viruses used in the past is a rather complex and inefficient process. The method used hitherto involves producing modified virus genomes on plasmid DNA (deoxyribonucleic acid), i.e. small, ring-shaped DNA molecules, which multiply autonomously in harmless bacteria. The targeted reproducible vaccine viruses must then be produced on the basis of several plasmids encompassing the modified genomes or other components of the viral replication machinery.

Dr Michael Mühlebach, head of the “Vaccine Vectors and Oncolytic Measles Viruses” Research Group and head of Section “Product Testing of Immunological Medicinal Products for Veterinary Use” at the Paul-Ehrlich-Institut, has been working for about 15 years on recombinant measles viruses for various applications and has searched for new methods to make the process both simpler and more efficient.

The measles virus has a single-stranded RNA (ribonucleic acid) genome transcribed in the reverse reading direction (negative-strand). This means it is not infectious on its own, but instead requires the simultaneous presence of additional viral factors (viral RNA-dependent RNA polymerase L, the phosphoprotein P as cofactor of the RNA polymerase, and nucleocapsid protein N) in a cell that is intended for the formation of infectious virus particles. These factors form the nucleic acid replication apparatus of the measles virus. Only when these components are present, replication-competent, recombinant measles virus particles are released. Such systems, which allow the release of replication-competent measles virus particles, are also referred to as rescue systems.

In order to enable the production respectively replication of the recombinant measles viruses, various complex rescue systems have already been developed in which the viral replication apparatus is made available by the use of transgenic cell lines and/or expression plasmids. These processes, which require at least four different components, are often inefficient. Due to the many components, rescue processes are also a problem with regard to "Good Manufacturing Practice" (GMP). GMP must be considered already for the production of material to be used in clinical trials.

Is it possible to make rescue processes easier? Arne Auste and Michael Mühlebach investigated this question and looked for ways to bundle all helper functions of the viral replication apparatus on a single helper plasmid. This was particularly challenging because the relative amounts of the various components required in the virus are regulated and are important for functionality. These proportions appear to play an important role.

The research team finally succeeded in developing a measles virus rescue system consisting of only two components: the plasmid which codes for the (modified) viral genome and a helper plasmid which bundles all the required helper functions. This two-component system works when the expression strength of the individual components – meaning the intensity of the reading of the individual genes (transcription) and of the formation of the corresponding proteins (translation) – are adapted to the necessary conditions by coordinated use of control elements of specific strength (promoters). The promoters are sections of DNA that control the reading of a gene (expression). This sophisticated control has made it possible to produce recombinant measles vaccine viruses based on only two plasmids.

The new two-component system does not yet have the efficiency of the more complex systems available thus far, however, in the long term, these research results pave the way for testing more efficient rescue systems for the production of recombinant measles viruses and their use in research and development.

https://www.microbiologyresearch.org/content/journal/jgv/10.1099/jgv.0.001815 - Abstract of the Publication
https://www.pei.de/EN/newsroom/press-releases/year/2022/20-novel-method-producin... - This Press Release on the Website of Paul-Ehrlich-Institut 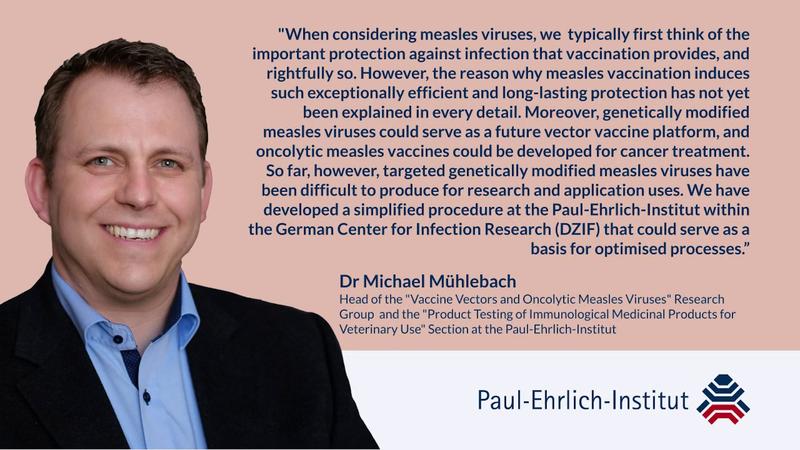