Home > Pressemitteilung: Sex roles in the animal kingdom are ...

How picky should females and males be when they choose a mate? How fiercely should they compete for mates? And how much should they engage in raising their offspring? The answers to these questions largely depend on the ratio of adult females to males in the social group, population or species. This is the conclusion of a review by a scientific team with the participation of the German Primate Center – Leibniz Institute for Primate Research (DPZ), the Max Planck Institute for Biological Intelligence, in foundation, and the Leibniz Institute for Zoo and Wildlife Research (Leibniz-IZW). The paper is published in the journal “Biological Reviews”.

In species with separate sexes, females and males often differ in their morphology, physiology and behaviour. Such sex-specific adaptations imply differences between females and males in the degree of mate competition, mate choice and parental care. Empirical research showed that females generally tend to be choosier than males about whom to mate with, and males are more likely than females to compete for mating opportunities. This pattern is often referred to as “conventional” sex roles. But the opposite pattern (“reversed” sex roles) also exists and there generally is a lot of variation in sex roles both between and within species. How can this surprisingly large variation in sex roles be explained? The team led by Peter Kappeler from the German Primate Center now reviewed the sex roles literature in animals and found that the ratio of adult males to females in a population likely is a strong evolutionary driver of sex roles. The scientific paper also identifies unanswered questions and proposes research that can lead to a better understanding of sexual selection and the evolution of sex roles.

According to recent theoretical and empirical findings, the ratio of adult males to females in a social group, population or species, that is, the adult sex ratio (ASR), plays a crucial part in driving variation in sex roles. Although the ratio of males to females in a population of a species is commonly expected to be similar (50:50), sex ratios in nature vary significantly across a wide range of taxonomic groups. For example, in some isopods the proportion of males is as low as one per cent, whereas in some bird species up to 90 percent are males. Variation in ASR can be measured at multiple spatial scales, from the species level to that of the social unit. In social species, the ASR can vary considerably between neighbouring groups. For example, long-term studies have reported large differences in the ASR between groups of spotted hyenas (Crocuta crocuta). “We previously showed that the sex bias in social dominance, a trait directly related to sex roles, is driven by the composition of the group in spotted hyenas, but we have yet to establish whether the ASR is the main driver of the competitive regimes of females and males”, says Oliver Höner, head of the Ngorongoro Hyena Project at the Leibniz-IZW and co-author of the paper.

“It would also be interesting to find out if changes in the ASR of hyena groups affect the performance of these groups and the overall population”, adds Sarah Benhaiem, who leads the Serengeti spotted hyena project at the Leibniz-IZW, and is a co-author of the paper. Within groups, the ASR can also vary substantially over time. The significance of these fluctuations depends, of course, on the life history and generation time of a particular species, but the key point is that the local ASR in a given habitat is not necessarily stable.
The ASR can influence multiple components of sex roles. For example, in black coucals (Centropus grillii), there are significantly more males than females, which is associated with increased female competition and male-only brood care. “In fact, we provide the first systematic review of the consequences of ASR biases on mate choice, sexual conflict, parental care, mating systems, social behaviour, hormone physiology and fitness”, says Wolfgang Goymann from the Max Planck Institute for Biological Intelligence, in foundation, and co-author of the paper. Take hormones, for example: they play a key role in shaping competition with rivals of the same sex, interactions with mating partners, and parental behaviour; and hormone levels themselves are affected during such interactions. One of the best pieces of evidence for a link comes from a study on humans: in a Frisbee tournament, the ratio of male to female observers influenced testosterone levels of players of both sexes.

Beyond these relationships between the ASR and sex roles, variation in the number of females and males may also be relevant in a conservation context. In many species, the sex of an individual is not determined genetically, but by abiotic environmental factors such as the ambient temperature. In these species, the effects of climate change can lead to extreme biases in sex ratios and threaten population demography and genetics. For example, an excess of males in common lizards (Lacerta vivipara) led to increased sexual aggression against females, whose survival rate and fertility subsequently dropped. Ultimately, this increased the male bias, and overall population size declined dramatically, as shown by numerical projections of population dynamics over many generations. The potential implications of biases in the ASR for population dynamics could therefore also be useful for conservation biology.

Three hyena males and a female 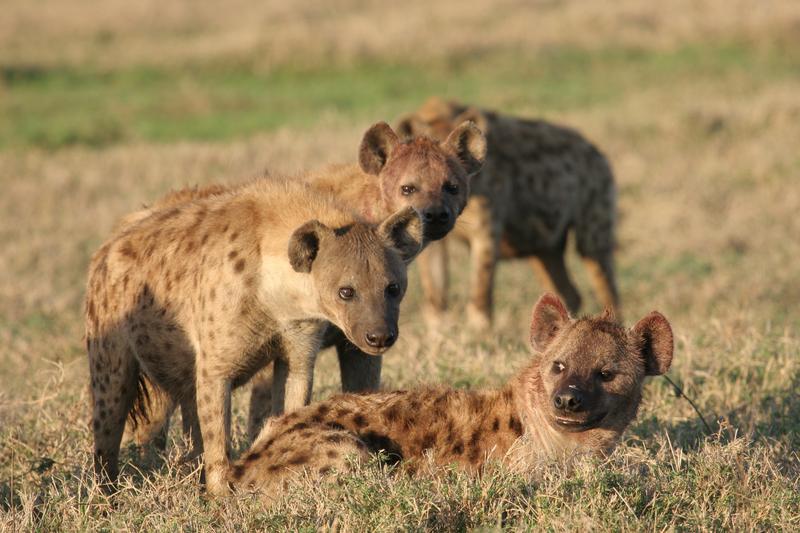