With its length and multitude of folds and protrusions, the intestine represents the largest contact surface between our body and the food taken up from the outside. However, little is currently known about which genes play an important role in digestion or contact with foreign substances. Researchers from the Leibniz Institute on Aging – Fritz Lipmann Institute, Jena, Germany, and the Fred Hutchinson Cancer Center, Seattle, USA, have succeeded in developing a novel method that makes genetic analyses possible for all regions of the intestine. This will facilitate future research on how genes influence the normal function of the intestinal lining, as well as their effect on diseases and aging

Jena/Seattle. With a length of around eight meters and its countless finger-shaped protrusions, known as villi, the intestine represents the largest contact surface in the inner of our body that comes in contact with the up-taken food. As the most important organ of the digestive tract, its main tasks include the absorption of nutrients from food, the provision of energy, and the excretion of harmful metabolites. The intestinal barrier acts as a kind of protective wall that prevents germs or foreign substances from entering the body and thus has a decisive influence on health (immune defense).

Researchers from the Leibniz Institute on Aging – Fritz Lipmann Institute (FLI) in Jena, Germany, in cooperation with partners from the Fred Hutchinson Cancer Center in Seattle, USA, have now achieved an important milestone: they have developed a novel method that on the one hand enables genetic studies for all regions of the intestine and on the other hand can be used to investigate in greater detail the influence of genes on carcinogenesis, the aging process, and host-microbiome interactions. The current research results have now been published in the journal BMC Biology.

“Using special germline mutations, it is currently possible to switch off individual genes in the intestinal epithelium and investigate their influence. But despite numerous efforts, there is no method yet that can be used to study a large number of genes simultaneously,” explains K. Lenhard Rudolph, research group leader at the FLI and professor of molecular medicine at FSU Jena. But such an approach would be necessary, because the human genome has over 25,000 genes, about three-quarters of which are active in our intestines.

“Moreover, research into the function of these genes via targeted single-gene mutation analyses is very costly and also time-consuming,” adds Prof. Rudolph. In principle, it is possible to induce mutations in individual cells of a tissue using virus particles containing specific gene sequences. With this approach, screening studies on a large number of genes can be performed simultaneously. “This method is already used today for the examination of skin, liver, and blood stem cells, but has not been transferable to the intestinal epithelium thus far,” emphasizes the stem cell researcher, “since the stem cells of the intestinal epithelium are deeply hidden in the crypts (the deep pockets between villi) and are thus very difficult to access for gene transfer by means of viral particles.”

However, this method has several weaknesses. The organoids must first be grown and propagated in cell culture in the laboratory before they can subsequently be genetically modified by specific viral vectors. This all takes place outside the organism, meaning that the mini-organs lack their natural environment, which, however, regulates the naturally occurring development and maintenance of the intestinal epithelium. Triggered by the unnatural growth conditions in the culture, changes can occur in the intestinal stem cells, which then do not accurately reflect the function of the genes under natural conditions.

Problems also arise during transplantation, because due to the length of the intestine and poor accessibility from the outside, transplantation of organoids remains limited to the lower colon and has an overall low efficiency, limiting the study to only a few genes. “Because of all these limitations and problems, it was necessary to find a new method that would enable the insertion of genetic modifications in situ, directly in the natural environment of the undisturbed intestinal epithelium, as well as making it possible to study the function of multiple genes in the natural intestinal epithelium,” Dr. Garside emphasizes. “This also has the advantages as cells in culture can undergo abnormal selection and changes that perturb the identification of gene functions in unmodified cells.”

The researchers succeeded in developing a robust and replicable procedure that makes it possible to introduce a large number of genetic modifications into the stem cells of the unmodified, natural intestinal epithelium without the need for transplantation. “We used laboratory mice for our study, which in many respects closely mirror the physiological conditions of the human intestinal epithelium,” reports Prof. Rudolph.

Due to the difficult-to-access anatomical location of the stem cells, which are deeply hidden in the crypts of the intestinal epithelium of adult mice, a special microinjection technique was used during the early embryonic development of the mice. This is because at this early stage of development, the intestine is still turned inside out, rendering it more accessible to the introduction of targeted genetic modifications.

The findings of the study show that the new technique can be used to study gene function in the intestinal epithelium both during development and in adult animals. In addition, the method has the potential to identify genes that have an impact on carcinogenesis, aging, and interactions between the microbiome (the bacteria in the gut) and the host.

The main advantage of this method is that it allows in vivo genetic screens to be performed in the undisturbed intestinal epithelium of mice and possibly also in other model organs. Thus, all regions of the gastrointestinal tract, including the stomach, small intestine, and colon, can be genetically modified and studied.

What is also significant is that this technique can be applied to other organs derived from the endoderm, such as the pancreas, liver, bladder, and lung, so that the method could be extremely beneficial in other areas of research as well. The development of this method is of great importance for the study of these organs and could particularly accelerate discoveries about the biology, function, and development of diseases of the intestinal epithelium. 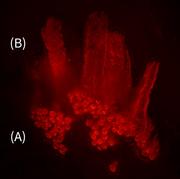 <
Fluorescence microscope image of cells in intestinal epithelium. (A) Stem cells in the deep crypts a ...

<
Fluorescence microscope image of cells in intestinal epithelium. (A) Stem cells in the deep crypts a ... 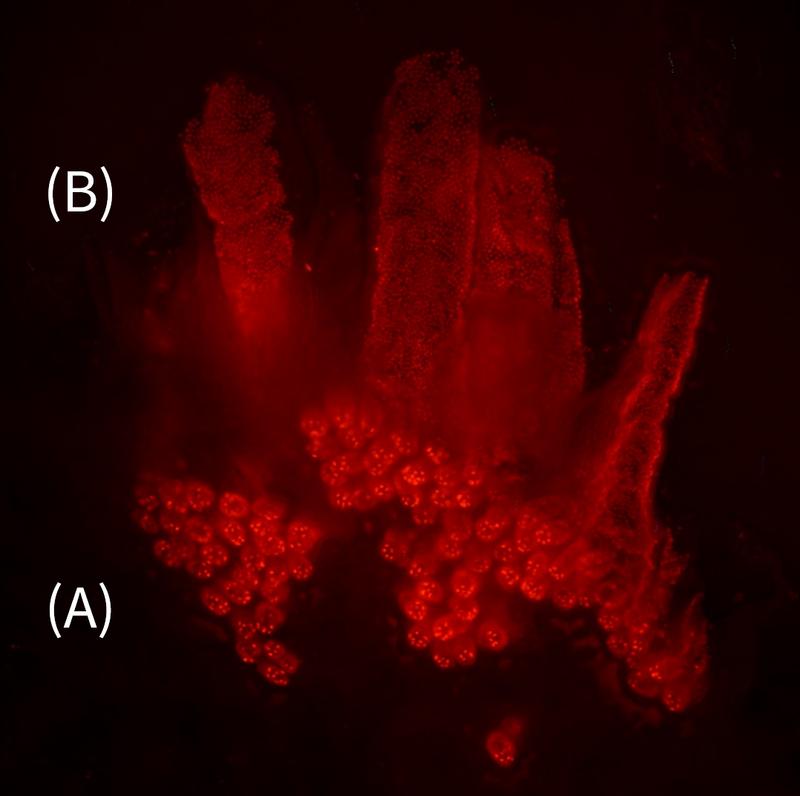