Substituted aromatics are among the most important building blocks for organic compounds such as drugs, crop­protecting agents, and many materials. The function of the molecules is determined by the spatial arrangement of the different building blocks, the substitution pattern. A research team from the Otto Diels Institute of Organic Chemistry at Kiel University has now presented a method in the journal Chem to produce compounds with a particularly attractive but typically challenging to access substitution pattern, more efficiently than before. To enable the required activation of carbon-hydrogen (C-H) bonds, they developed a special palladium catalyst that can for the first time selectively approach a previously impossible position within molecules.

With their new method, the scientists close a long-time research gap. "In principle, substituted aromatic compounds have three positions to which a catalyst can attach in order to induce a reaction - called ortho, meta and para. Depending on the position, different chemical products with fundamentally different properties are formed at the end," says Manuel van Gemmeren, Professor of Organic Chemistry at Kiel University. For the ortho and para positions, it is already known how to allow catalysts to specifically attack there. Now, for the first time, Manuel van Gemmeren and his team can also selectively target the meta position directly. This allows them to produce meta-substituted benzyl ammonium species, which are versatile compounds for further elaboration in organic chemistry.

Normally, these compounds only appear in small amounts mixed with other products. “Until now, they had to be separated from each other with a lot of effort. Alternatively, you needed tedious synthetic routes to produce them in a targeted manner. Both cases resulted in unnecessary waste products,” explains van Gemmeren.

With the new method, meta-substituted benzyl ammonium compounds can now be produced much more efficiently. The research team around van Gemmeren used a principle that had not been described in the literature before: the palladium catalyst they designed can interact with charges in the molecule. This drastically changes the composition of the resulting products in favour of the substitution pattern that was previously difficult to produce. Calculations by colleagues at the Institute of Chemical Research of Catalonia (ICIQ), Spain, showed that charge interactions are indeed responsible for this.

These findings from basic research can also be of interest to pharmaceutical or agricultural companies that build up huge libraries of structurally related molecules to study their biological activity. "Wherever the largest possible variety of compounds is systematically examined, our method can be a helpful tool to close previous knowledge gaps," says van Gemmeren.

The development of the new method is the result of many years of preliminary work that began at the University of Münster. Here van Gemmeren set up his own research group on the activation of C-H bonds via the Emmy Noether program of the German Research Foundation (DFG) before he came to Kiel University in 2022. In Kiel, he will also implement his ERC Starting Grant project "DULICAT", from which the conceptual idea for the new method emerged. For this van Gemmeren had received funding of 1.8 million euros from the European Research Council (ERC).

Manuel van Gemmeren, Professor of Organic Chemistry (left), and his research team, including doctoral researcher Fritz Deufel (right), have developed a method that gives access to chemical compounds that were challenging to synthesize before. 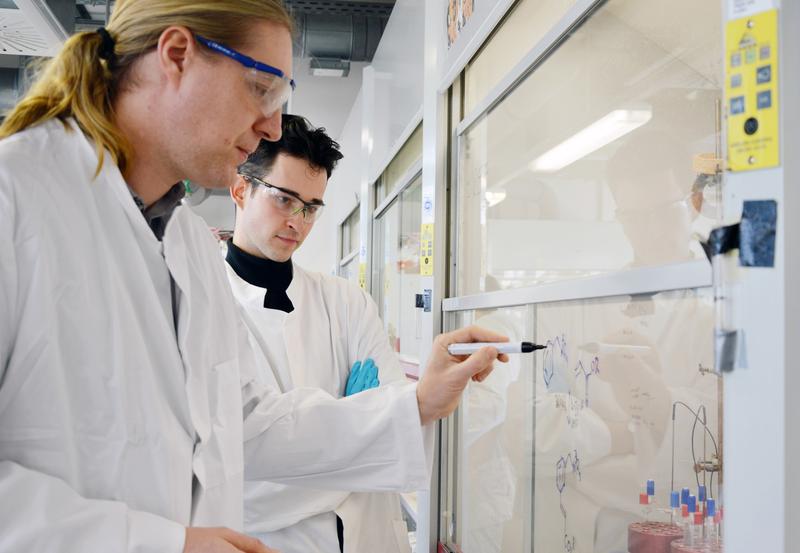