An international research team including scientists from Greifswald succeeded in performing the first determination of the mass of the atomic nuclei of the exotic cadmium isotopes 129Cd, 130Cd und 131Cd. These short-lived particles with half-lives of only fractions of seconds were delivered by the ion-separator ISOLDE at the European research center CERN http://home.cern/ and investigated by use of Penning traps https://en.wikipedia.org/wiki/Penning_trap and a multi-reflection time-of-flight mass spectrometer https://en.wikipedia.org/wiki/Time-of-flight_mass_spectrometry.

The results confirm the expected magic neutron number N=82 and are of significant relevance for simulation studies extending our understanding of the origin of the chemical elements in the region from tin to barium which are found with comparatively high abundances in our Solar System. The results of the measurements and accompanying calculations are reported by the international research journal Physical Review Letters http://journals.aps.org/prl/ in its latest issue (02. Dezember 2015).

We are made of stardust – only hydrogen and helium were around shortly after the big bang; all other elements were and are still produced in the stars. The nuclei of the lower mass elements up to about iron can grow in the center of stars. Above that element, things get more complicated as energy is no longer released in the build-up of heavier elements. On the contrary, energy is used up. Thus, only explosive, i.e., very energetic star processes, such as supernovae or the mergers of neutron stars with black holes, can supply the necessary energies. Under these conditions, further neutrons are attached to the atomic nuclei. In general, the resulting neutron-rich nuclei decay via the so-called beta decay, i.e. a reaction where the nuclei increase their atomic number by the emission of an electron: However, it is still unclear and a topic of intense research as to where and how exactly these processes take place. In this context, experimental data about the nuclei involved are of highest interest. However, these nuclei are often very short-lived and accompanied by large amounts of nuclei of similar masses – which poses big challenges for the experimentalists.

Recently, scientists of the ISOLTRAP collaboration http://isoltrap.web.cern.ch/isoltrap/ which includes researchers of CERNhttp://home.cern/ , of the Max-Planck-Instituts für Kernphysik in Heidelberg https://www.mpi-hd.mpg.de/mpi/start/ , of the Helmholtzzentrums für Schwerionenforschung in Darmstadt https://www.gsi.de/start/aktuelles.htm as well as from universities in Dresden https://tu-dresden.de/ , Greifswald http://www.uni-greifswald.de/ , Istanbul (Turkey) http://www.istanbul.edu.tr/ , Manchester (United Kongdom) http://www.manchester.ac.uk/ and Paris-Sud (France) http://www.u-psud.fr/ succeeded in con-tributing important experimental results for the simulation of possible nuclear-synthesis scenarios. This input data was then used by theoreticians of the Free University of Brussels http://www.vub.ac.be/en/ and the Max-Planck-Institute for Astrophysics at Garching http://www.mpa-garching.mpg.de/ for such simulations of the nuclear reactions.

Like with the electrons in the atomic shell, the protons and neutrons, i.e. the constituents of the atomic nucleus, are found in energetic shells. Whenever such a shell has just been filled up, the nucleus is particularly stable and the corresponding proton and neutron numbers are called magic numbers. An example of a magic neutron number is N=82. As cadmium nuclei are defined to have Z=48 protons, a special configuration of neutrons is found for this element at mass number A=Z+N=130. Due to their enhanced stability, nuclei with magic numbers are very often produced in the explosive stellar phases, which leads to a relatively high abundance, even during the continuous transmutation processes. Because of their enhanced presence, they are called waiting-point nuclei. After the stellar explosion, these waiting-point nuclei beta-decay into the region of the periodic table of elements mentioned above – with enhanced abundances at the mass numbers around A=130.

Up until the present studies, only the nuclear mass of 130Cd was known, and this only in-directly from nuclear reactions. The masses of the neighboring isotopes 129Cd and 131Cd had not been measured at all. Now, the ISOLTRAP collaboration succeeded in the first such measurements, made possible by a multi-refection time-of-flight mass spectrometer, a contribution from the University of Greifswald. It was operated in two different application modes, which had been introduced recently in other experiments (see the press releases “Laboratory Mass Measurement deepens Insight into Neutron Star“ https://idw-online.de/en/news516628 , “Ion ping pong reveals forces in atomic nuclei“ https://idw-online.de/en/news539611 and “Ion Pingpong confirms magic neutron number of exotic atomic nuclei“ https://idw-online.de/en/news631425 ).

The time-of-flight mass spectrometer was applied for the isotopes 129Cd and 130Cd, which not only live somewhat longer, but are also produced at rates of more than a thousand particles per second, to select the cadmium isotopes from the mixture of more abundant isobars produced at CERN, i.e. atomic nuclei with almost identical mass. Isobars have the same total number of nucleons A=Z+N, differ however, in the individual numbers of the Z protons and N neutrons. The multi-refection time-of-flight mass spectrometer of ISOLTRAP was able to fish the nuclei of interest, 129Cd and 130Cd, from the isobar mixture and thus prepare them for mass spectrometry in a Penning trap. The production rate of the isotope 131Cd, however, was an order of magnitude lower and therefore not sufficient for a Penning-trap experiment in the given measurement time. In this case, the mass measurement itself had to be performed by use of the multi-refection time-of-flight device. Although its relative mass uncertainty is “only” slightly better than one in a million, and thus not as accurate as the Penning trap, the measurement can be performed faster and with less particles.

This allowed the studies to go beyond the magic neutron number. This new achievement is of particular importance, as the energetic distance between the filled neutron shell and the following shell is only accessible with the 131Cd mass value, as 131Cd places a first neutron in this new shell. In other words, we now know the energy that is necessary to detach this last neutron from 131Cd and go back to the more stable 130Cd. The energetic shell distance of cadmium was found to be smaller than that of tin, which had already been known. This had been expected as tin also has a magic proton number (Z=50), whereas in the case of cadmium (Z=48) the proton shell is not yet filled up. The increased neutron-shell energy distance of tin is a result of the mutual strengthening of the N and Z shell effects – as recently found also for the element calcium at smaller magic proton and neutron numbers, again by the ISOLTRAP collaboration (see again the press release “Ion Pingpong confirms magic neutron number of exotic atomic nuclei” https://idw-online.de/en/news631425)

Financial support for this work came from the German Federal Ministry of Education and Research (BMBF, 05P12HGCI1, 05P12HGFNE, 05P15HGCIA, and 05P09ODCIA), the Nuclear Astrophysics Virtual Institute (NAVI) of the Helmholtz Association, the Helmholtz-CAS Joint Research Group (HCJRG-108), the Max-Planck Society, the European Union (7th framework through ENSAR, 262010), the French IN2P3, the Helmholtz Alliance Program (HA216/EMMI), the STFC (ST/L005743/1 and ST/L005816/1), the IMPRS-PTFS, the FRS-FNRS (Belgium), the Max-Planck/Princeton Center for Plasma Physics (MPPC), and the Robert-Bosch Foundation.

Photo: Graduate students Dinko Atanasov (Max-Planck-Institut für Kernphysik, Heidelberg, on the right) and Frank Wienholtz (Uni Greifswald) on the highest platform of the three-story ISOLTRAP setup in the experimental hall of ISOLDE at CERN - Photo: Maxime Mougeot
The photograph can be downloaded and used free of charge in connection with this press release. The name of the photographer has to be mentioned. Download http://www.uni-greifswald.de/informieren/pressestelle/pressefotos/pressefotos-20...

<
Graduate students Dinko Atanasov and Frank Wienholtz on the highest platform of the three-story ISOL ...
Maxime Mougeot / The photograph can be downloaded and used free of charge in connection with this press release. The name of the photographer has to be mentioned.
None 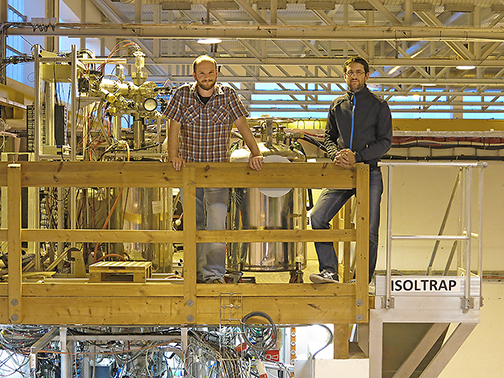