Various processes in our body are controlled by subsequent changes of proteins. Therefore, the identification of such modifications is essential for the further exploration of our organism. Now, scientists of the Max Planck Institute of Biochemistry in Martinsried, Germany, have made a crucial contribution to this: Using a new method, they have been able to identify more than 6,000 glycosylated protein sites in different tissues and have thus established an important basis for the better understanding of all life processes (Cell, May 28, 2010).

Many biological mechanisms like immune response, apoptosis or pathogenesis of diseases are based on the subsequent transformation of single components of proteins, the amino acids. Scientists call this process “posttranslational protein modification”. Although the technologies in proteomics have developed rapidly in the last years, until now the identification of such modified proteins was only possible with limitations. Particularly, the transformation of proteins by glycosylation – carbohydrates binding to single amino acids – has been widely unexplored. But exactly this process is one of the most important mechanisms for the transformation of proteins and plays an important role in the formation of organs and organisms. When errors occur during the protein modification or in case it takes place in an unregulated way, this can contribute to diseases like Alzheimer’s disease or Creutzfeldt-Jakob disease.

Now, scientists of the Max Planck Institute of Biochemistry in the research department “Proteomics and Signal Transduction”, headed by Matthias Mann, have been able to shed light on the dark: They developed a method based on mass spectrometry that allows the identification of N-glycosylated protein sites in different tissues in a highly efficient way. N-glycosylation is a specific type of glycosylation, during which the carbohydrates bind on a certain component of a protein, the amino acid asparagine (abbreviated with “N”).

The new method is based on a filter technique which offers the possibility to extract also poorly accessible proteins from biological samples. The scientists combined this method with the application of high-resolution mass spectrometers whereby they were able to identify 6,367 N-glycosylated protein sites. Furthermore, they derived novel recognition sequence patterns for N-glycosylation.

These findings constitute an important progress in proteomics, because they help to understand the processes inside of the human body even better. Moreover, they could play an essential role for the investigation of diseases. For example, the scientists managed to identify some modified protein sites which are associated with different illnesses: They discovered N-glycosylated sites, unknown up to now, on proteins which play an important role in Alzheimer’s disease. Because N-glycosylation is involved in many processes which are going wrong in Alzheimer’s disease, scientists suspect that this type of protein modification directly causes the disease or, at least, influences its course crucially. Hence, the Max Planck scientists hope that the results of this study could contribute to the further investigation of diseases like Alzheimer’s. [UD]

<
Ionization of the sample with electro spray prior to the mass spectrometer measurement.
Picture: Axel Griesch / Copyright: MPI of Biochemistry

Ionization of the sample with electro spray prior to the mass spectrometer measurement. 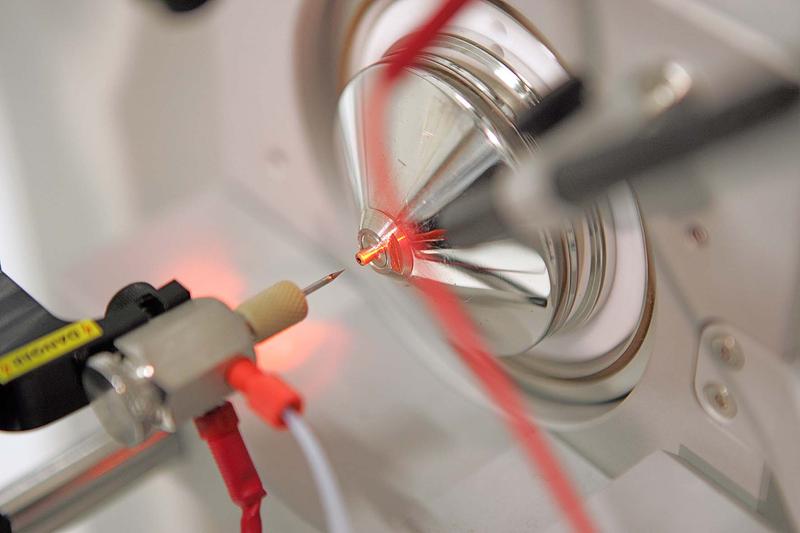