150 years of brewing and food technology at Weihenstephan

In some circles, brewing science is referred to be the “original Bavarian” discipline, since it started out at the Weihenstephan brewery 150 years ago. Since then, it has grown into an Academic Faculty of Brewing and Food Technology at the Technical University of Munich. Apart from producing textbooks and brewer’s yeasts that are used worldwide, Weihenstephan is now also a wellspring of revolutionary techniques, such as the methods of continuous fermentation or energy-saving milk concentrate production.

Back in 1865 at Weihenstephan, it all started as a one-semester “Brewers’ Course” under Carl Lintner. Its aim was to produce brewers, and it was therefore mainly artisanal in nature to begin with. The fact that graduate engineers would one day leave this former nucleus of brewing science after a scientifically oriented, ten-semester degree program was to be expected from those early beginnings.

At first, though, acceptance for the “Brewers’ Course” was not particularly strong in Bavaria itself: around two-thirds of its students back then came from other parts of Germany. It took another three decades, in 1895, before a Royal Bavarian Academy of Agriculture and Breweries was proclaimed. For the students, it was a real grind, with 54.5 hours a week in the winter semester and 40 in summer. It was not until 1912 that they could attend another year of study in order to become plant supervisors.

In addition, supplementary lectures in book-keeping and business studies were added on. When the Academy was raised to a higher-education level College for Agriculture and Breweries in 1920, two further semesters were added to the course of studies. A four-semester program was thus developed with the title of “Nationally Certified Master Brewer” awarded on its completion. Basic sciences such as chemistry and physics were added to the syllabus, more teaching staff was employed – and the number of students increased progressively from then on.

The first engineers leave the University

The College was given the right to award doctorates in 1924. The first Brewing Engineers completed their exams in 1926/27. By then, students were coming here from all parts of Europe and from overseas. Numerous monographs were published, from the “Technology of Malt Preparation” and “Technology of Brewing Beer”, through to the ‘”Biological Operational Control of the Brewery” – laying down the cornerstone for Weihenstephan’s textbooks, which were later to gain worldwide renown, which they still enjoy today.

In more recent history, it is the textbooks of Professors Ludwig Narziss and Werner Back that definitively put Weihenstephan on the map as the first port of call for modern brewing science.

Moreover, having conducted extensive series of trials at a number of breweries as part of his dissertation, Professor Narziss found the ideal yeast for today’s lager beer, used throughout the world. It is marketed globally from Weihenstephan. “This technology has allowed this bottom-fermented beer to be perfected to such an extent, that it is now consumed throughout the globe,” says Dr. Martin Zarnkow – among other interests, he has specialized in the history of beer and is Head of the Department of Research and Development of the Research Center Weihenstephan for Beer and Food Quality – “and doctoral candidates supervised by Professor Narziss have also characterized the top-fermenting wheat beer yeasts, allowing a variety of flavors to be developed.”

Similarly, today’s state of knowledge would not have been achieved without Professor Back’s Colour Atlas and Handbook of Beverage Biology: “He allayed the industry’s fears of bacteria that are harmful to beer,” explains Zarnkow. This work also established a microbiological monitoring philosophy for the protection of yeast and of fermentation, and for the general protection of beer from contamination, with the aid of a substrate used throughout the world.

Upgrade to Academic Faculty of Brewing and Food Technology

Today, brewing scientists from the Technical University of Munich (TUM) work side by side with food technologists: in the early 1970s, the faculty was upgraded and expanded to include the Food Technology study program. These days, the brewing scientists of Weihenstephan are investigating malts from cereals other than barley, and even from exotic pseudo-cereal species such as quinoa, amaranth and buckwheat. They are tinkering with beer stability, refining energy-saving brewing methods and, finally, have developed a non-stop fermentation technique that brews beer more efficiently via several fermentation tanks working in succession, while the food technologists are investigating an energy-saving method for the manufacture of milk concentrates or researching innovative packaging materials.

Worldwide application of the Weihenstephan standards

In the meantime, both food manufacture and brewing have become high-tech processes. Enormous quantities are processed, mixed, flavored and packed. All this needs to be in tune with the requirements of modern food technology and must run hygienically and efficiently. Machines from a variety of manufactures are used, all of them connected into a common network. Very often, this is done according to the Weihenstephan standards: these ensure that machines and production systems communicate smoothly with each other and exchange the right information while producing foods and beverages and filling them into containers. The biggest breweries throughout the world work along these lines; however, the same standards are used not only for the production of beverages, but also in the processing and packing of meat products or baked goods.

In the same manner, the TUM scientists are seeking to identify molecules that cause clouding during brewing and are striving to improve the flavor of non-alcoholic beer. Thus, Weihenstephan is the only university to possess a dealcoholization system aimed at making 0.0-percent beer even more attractive. The most recent project, which only started in September 2015, has been named “Robofill 4.0”, its aim being to allow individualized beverage production.

During the 150 years since the first brewers left Weihenstephan, much has been discovered and scientifically clarified about beer. This has left its impact on today’s global brewing standards. The most important step into the future was the establishment of the Weihenstephan International Center for Beverage Science with an investment volume of 24.9 million Euros,” says TUM President Professor Wolfgang Hermann, who drove this science sector forward in the context of a radical reform of the Freising-Weihenstephan site. “At the time, the underlying research program convinced the German Council of Science and Humanities, so that the Federal Government contributed 50 percent of the costs for the new construction project. What’s more, with Professor Thomas Becker, we were successful in appointing a renowned food technologist at Weihenstephan. At the time of the 150-year jubilee, beverage science at TUM is unrivalled throughout the world.

Further information about the program of celebrations for the 150-year jubilee of the Academic Faculty of Brewing and Food Technology on October 16 and 17, 2015, at: https://www.150-jahre-sfbl.de/content/start

<
The Weihenstephan International Center for Beverage Science was opened the 22th of april in 2013.
(Photo: Benz/ TUM)
None

The Weihenstephan International Center for Beverage Science was opened the 22th of april in 2013. 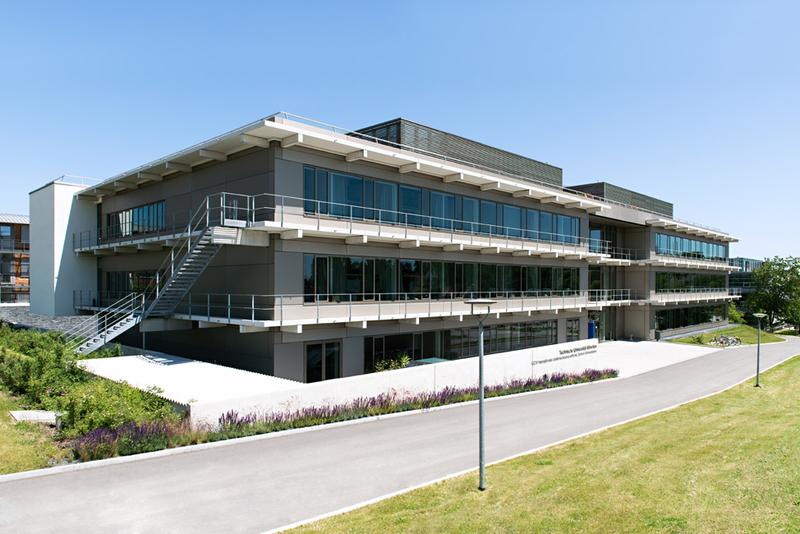