Nanoscience can arrange minute molecular entities into nanometric patterns in an orderly manner using self-assembly protocols. Scientists at the Technical University of Munich (TUM) have functionalized a simple rod-like building block with hydroxamic acids at both ends. They form molecular networks that not only display the complexity and beauty of mono-component self-assembly on surfaces; they also exhibit exceptional properties.

Designing components for molecular self-assembly calls for functionalities that ‘interlock’. For example, our genetic information is encoded in two DNA strands, zipped together in a ‘spiral staircase’ double helix structure in a self-assembly process that is stabilized by hydrogen bonding.

Inspired by nature’s ‘zippers’ researchers at the Technical University of Munich aim to construct functional nanostructures to push the boundaries of man-made structures.

Scientists at the Technical University of Munich, diverse in discipline, nationality and gender, joined forces to explore a new feature in two-dimensional architectures: a chemical group named hydroxamic acid.

A combination of advanced microscopy tools, spectroscopy and density functional theory investigations found that the molecular building block adapts its shape somewhat in the environment of the supporting surface and its neighboring molecules. This affords an unusual manifold of supramolecular surface motifs: two to six molecules held together by intermolecular interactions.

Only a handful of these motifs self-organized into 2-D crystals. Among them, an unparalleled network emerged, whose patterns evoke images of sliced lemons, snowflakes or rosettes. They feature three differently sized pores able to snuggly hold individual small molecules of gas such as carbon monoxide in the smallest, or small proteins like insulin in the largest.

“In this regard, it is a milestone in the tessellations achieved by molecular nanostructures and the number of different pores expressed in crystalline 2-D networks,” says Dr. Anthoula Papageorgiou, last author of the publication. “It thus offers unique opportunities in bottom-up nano-templating, which we will explore further.”

Nanocages with a twist

Like our left and right hands, the shape of two mirrored cage structures cannot be superimposed. Since the 19th century, academics have characterized this type of object symmetry as ‘chiral’, from the ancient Greek χείρ (hand). These kinds of molecules are frequently found in natural compounds. Chirality influences interactions of polarized light and magnetic properties and plays a vital role in life.

For example, our olfactory receptors react very differently to the two mirror images of the limonene molecule: one smells like lemon, the other like pine. This so-called chiral recognition is a process that can determine whether a molecule acts as medicine or poison.

The inner walls of the obtained nanostructure cages offer sites that can direct guest molecules. The researchers observed such a process in some of the larger pores, where three of the same molecules assembled as a chiral object. At room temperature, this object is in motion, like a music box ballerina, leading to a blurred image.

In their future work, the team hopes to steer these kinds of phenomena for chiral recognition and artificial nano-machinery.

https://www.tum.de/nc/en/about-tum/news/press-releases/details/35868/ Link to the press release

<
Complex supramolecular nano-structure on a silver surface. The chiral pattern is controlled by hydro ...
Image: B. Zhang / TUM

Complex supramolecular nano-structure on a silver surface. The chiral pattern is controlled by hydrogen-bonding between hydroxamic acids decorating both ends of the rod-like building block. 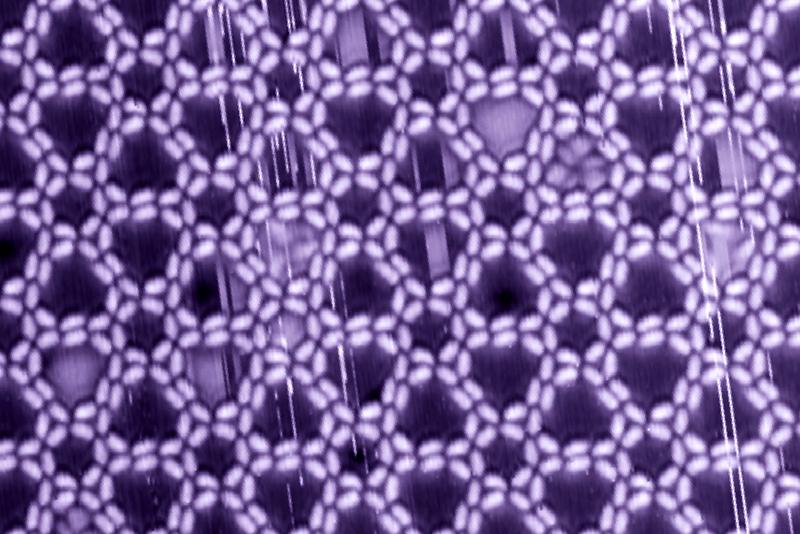