Belle II yields the first results: In search of the Z′ boson

The Belle II experiment has been collecting data from physical measurements for about one year. After several years of rebuilding work, both the SuperKEKB electron–positron accelerator and the Belle II detector have been improved compared with their predecessors in order to achieve a 40-fold higher data rate.

Scientists at 12 institutes in Germany are involved in constructing and operating the detector, developing evaluation algorithms, and analyzing the data. The Max Planck Institute for Physics, the Semiconductor Laboratory of the Max Planck Society, the Ludwigs-Maximilians-Universität and the Technical University of Munich made leading contributions to the new development of the highly sensitive innermost detector, the Pixel Vertex Detector and the software for analyzing the data.

With the help of Belle II, scientists are looking for traces of new physics that can be used to explain the unequal occurrence of matter and anti-matter and the mysterious dark matter. One of the so far undiscovered particles that the Belle II detector is looking for is the Z′ boson – a variant of the Z boson, which acts as an exchange particle for the weak interaction.

As far as we know, about 25 percent of the universe consists of dark matter, whereas visible matter accounts for just under 5 percent of the energy budget. Both forms of matter attract each other through gravity. Dark matter thus forms a kind of template for the distribution of visible matter. This can be seen, for example, in the arrangement of galaxies in the universe.

Link between dark and normal matter

The Z′ boson may play an interesting role in the interaction between dark and visible matter, (i.e., it could be a kind of mediator between the two forms of matter). The Z′ boson can – at least theoretically – result from the collision of electrons (matter) and positrons (anti-matter) in the SuperKEKB and then decay into invisible dark matter particles.

The Z′ boson can thus help scientists to understand the behavior of dark matter. What’s more, the discovery of the Z′ boson could also explain other observations that are not consistent with the standard model, the fundamental theory of particle physics.

But how can the Z′ boson be detected in the Belle II detector? Not directly – that much is sure. Theoretical models and simulations predict that the Z′ boson could reveal itself through interactions with muons, the heavier relatives of electrons. If scientists discover an unusually high number of muon pairs of opposite charge after the electron/positron collisions as well as unexpected deviations in energy and momentum conservation, this would be an important indication of the Z′ boson.

However, the new Belle II data has not yet provided any indication of the Z′ boson. But with the new data, the scientists can limit the mass and coupling strengths of the Z′ boson with previously unattainable accuracy.

“Despite the still small amount of data, we can now make measurements that have never been done before,” says the spokesperson of the German groups, Dr. Thomas Kuhr from the Ludwig Maximilian University of Munich. “This underlines the important role of the Belle II experiment in the study of elementary particles.”

These initial results come from the analysis of a small amount of data collected during the start-up phase of SuperKEKB in 2018. Belle II went into full operation on March 25, 2019. Since then, the experiment has been collecting data while continuously improving the collision rate of electrons and positrons.

If the experiment is perfectly tuned, it will provide considerably more data than in the recently published analyses. The physicists thus hope to gain new insights into the nature of dark matter and other unanswered questions.

The German working groups in the Belle II experiment are funded by the following institutions and programs:

<
The Belle II detector searches for the Z’ boson. This particle could reveal itself by an unexpected ...
KEK/Belle II

Collision events in the core of the Belle II detector 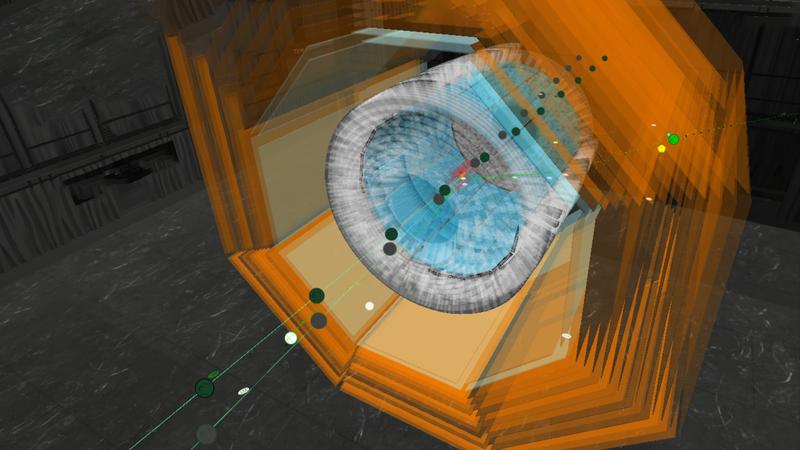 The Belle II detector searches for the Z’ boson. This particle could reveal itself by an unexpected high number of muon pairs with opposite charges, as shown here. 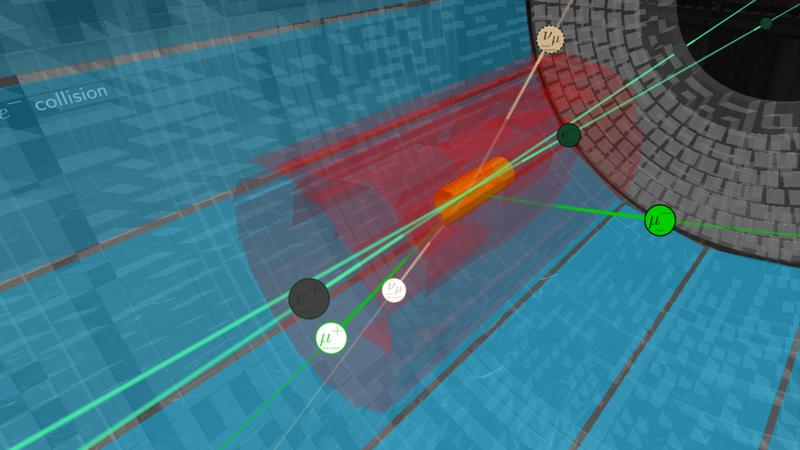