Neuronal circuits in the brain 'sense' our inner state

How decisions are made and how behavior is controlled is one of the most important questions in neuroscience. The neurotransmitter dopamine plays a central role in all of this. Scientists at the Technical University of Munich (TUM), together with researchers at the Max Planck Institute of Neurobiology, looked into the role that dopamine plays in the decision-making process and in controlling movement.

Animals have an innate preference for certain scents and tastes. Attractive scents are linked to things like good food. Less attractive scents – that of spoiled food, for example – instinctively give the animal a signal which says: “There could be danger here!” When it comes to taste, all animals have similar preferences: Sugars and fats are perceived positively, whereas a bitter taste is perceived rather negatively.

In order to be able to make such evaluations, we need signals in the brain that tell us “This is good” or “This is bad”. The dopaminergic system in the brain, better known as the reward system, plays an important role in these evaluations.

Understanding what happens in the brain

Neurons that produce dopamine, known as dopaminergic neurons, play a role in a range of diseases, from addictive behavior and obesity to Parkinson's disease. In addiction or obesity, the reward system signals can be too strong or also too weak. In Parkinson’s disease, dopaminergic neurons degenerate, and this affects the control of motor functions.

To learn more about the processes in the brain, basic research is essential. Ilona Grunwald Kadow, Professor of Neural Control of Metabolism at the TUM School of Life Sciences in Weihenstephan, and her team are conducting research on the fly Drosophila melanogaster.

Neuroscientists often use this fly as a model because its neuronal networks are much simpler than those of humans. Using genetic tricks, scientists can turn individual network components on and off or change them. This enables the researchers to understand the principles of neuronal circuits that underlie the functions of more complex brains. "Dopamine plays a very similar role in the brain of humans and insects," explains the scientist.

Further clarifying the effect of dopamine

Dopamine is one of the most intensively studied signals in the brain. It is involved in both cognitive (e.g. motivation, reinforcement, goal-oriented behavior, motor control and movement, decision-making and learning) and more basic functions (e.g. reproduction and nausea).

How dopamine contributes to the various aspects of neural circuit functionality and behavior is an open question, but it is believed that dopaminergic neurons use different activity patterns to send a signal to the brain about what the body needs and senses. “We have now investigated the activity of the dopaminergic neurons in greater detail,” said Ilona Grunwald Kadow. The team developed a custom 3D-imaging method based on in-vivo calcium imaging, as calcium is a good indicator of neuronal activity.

Using this method, the research team was able to show that the activity of a network of dopaminergic neurons reflects both the innate preferences for smell and taste as well as the physiological state of the organism.

In addition to sensory stimuli such as smell or taste, dopaminergic neurons also record information as to whether an organism is moving or not. The neurons can respond to both internal behavioral states and external signals, bring them together, and use this to support both cognitive and motor processes.

"By doing that, the neurons can react flexibly and individually to the most important information – such as smell, taste, but also hunger or one’s own movement. This is important to reach a balanced decision, because an external sensory signal can sometimes mean something good or bad, depending on an organism’s condition," says Prof. Grunwald Kadow.

The researchers were surprised that dopaminergic neurones behave quite differently in different animals. The scientists speculate that this might explain individual preferences and behavioral differences between individuals.

In addition, the researchers found that the movement of the animal not only activates these dopaminergic neurones, but also other areas of the brain that actually have nothing per se to do with movement. This provides starting points for further research, for example what role movement plays in general when reacting to an environmental stimulus.

<
Prof. Dr. Ilona Grunwald Kadow
A. Eckert / TUM
Free for use in reporting on TUM, with the copyright noted.

<
Dopamine helps animals like the fly Drosophila melanogaster to classify good and bad (symbolized by ...
Nicolas Gompel
Free for use in reporting on TUM, with the copyright noted. 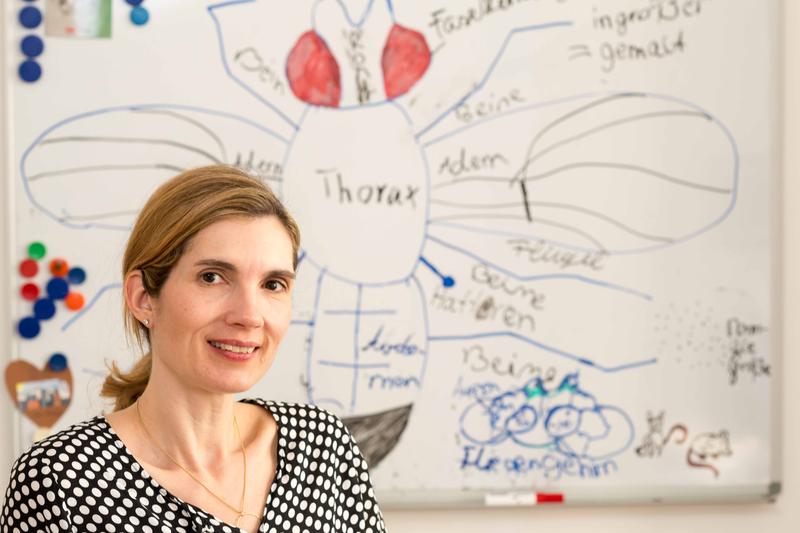 Dopamine helps animals like the fly Drosophila melanogaster to classify good and bad (symbolized by black and white) in their decisions.