Home > Pressemitteilung: Living as a social parasite leads to ...

An international team of researchers headed by biologist Lukas Schrader from Münster University show that a socially parasitic lifestyle of ants not only leads to a change in external traits, but also to a genome erosion in the species. This so-called genome erosion impacted genes particularly important for non-parasitic ants, such as olfactory receptors functioning in chemical communication. These findings indicate that the evolution of social parasitism follows similar evolutionary mechanisms as that of non-social, (“regular”) parasitism. The study is published in the journal "Nature Communications".

Some species of ants make life easier for themselves: they live in the colonies of other ant species, exploiting their hosts’ resources. This form of social parasitism has evolved several times independently in ants. An international team of researchers headed by biologist Dr. Lukas Schrader at the University of Münster has now shown that these social parasites have lost some parts of their genomes. This so-called genome erosion impacted genes particularly important for non-parasitic ants, such as olfactory receptors functioning in chemical communication. These findings indicate that the evolution of social parasitism follows similar evolutionary mechanisms as that of non-social, (“regular”) parasitism. The study has been published in the journal “Nature Communications”.

In order to detect genetic changes in the inquiline social parasites, the researchers compared the genomes of three such species with those of two host species in the leaf-cutting ant genus Acromyrmex. “The evolution of social parasitism was already described as a degenerative process over 100 years ago, because many morphological traits appear regressed in the parasites,” explains lead author Lukas Schrader, researcher at the Institute of Evolution and Biodiversity at Münster University. “Now, for the first time, we have shown that the genomes of these species also show signs of degeneration.” Also, he adds, the results not only contribute to our understanding how changes in the genome affect the biology of an organism, but also provide new insights into the molecular evolution of social parasitism. Researchers from Denmark, the United States, China, and Uruguay were also involved in the study.

Methodology and results in detail

Naturalist Charles Darwin found socially parasitic ants “most perplexing in many ways”, as he wrote in a letter to psychiatrist, neurologist and ant researcher Auguste Forel in 1874. The reason for his excitement was the extraordinary life style of these insects, as ant inquiline social parasites have specialized in infiltrating and exploiting the colonies of other ant species. This uncommon life style is associated with sometimes substantial changes in the behavior, morphology and physiology of the parasites. Almost all species of inquiline ants have, for example, reduced mandibles or a thin, unpigmented cuticle. And unlike any other ants, these parasites often no longer produce any workers.

So far, however, there has been hardly any research on the genomes of such species. To study the genetic signatures of social parasitism, the international team of researchers sequenced and compared genomes of three socially parasitic species (Acromyrmex charruanus, A. insinuator, Pseudoatta argentina) with those of two hosts (A. heyeri, A. echinatior). Additionally, the researchers used X-ray micro-computer tomography producing three-dimensional images of the ants’ heads, to show that the social parasites’ brains were also reduced compared to brains of normal ants.

“What we found was that, in comparison with their host species, the genomes of inquiline social parasites are eroding!”, Lukas Schrader explains. “One reason for this is that certain social traits are no longer required by the social parasites.” This erosion particularly affects the olfactory receptors of the socially parasitic species, which are crucial for complex chemical communication in normal ants. The genome erosion was strongest in the species P. argentina, which also shows the most extreme form of social parasitism. The changes found in the social parasites’ genomes resemble genetic regressions already known from other symbionts, such as bed bugs or bacterial endosymbionts – bacteria that have adapted to life in a host cell. For Lukas Schrader and the team of researchers, the results indicate that social parasitism can have extreme consequences for the genome of the parasite, similar to what is known for “regular” parasites.

The work received funding from the European Research Council (ERC), the US National Science Foundation (NSF) and the Lundbeck Foundation in Denmark.

Three-dimensional surface reconstructions of the brains and head capsules of host species A. heyeri (top) and the socially parasitic species P. argentina. The ants? olfactory lobes are marked in yellow. 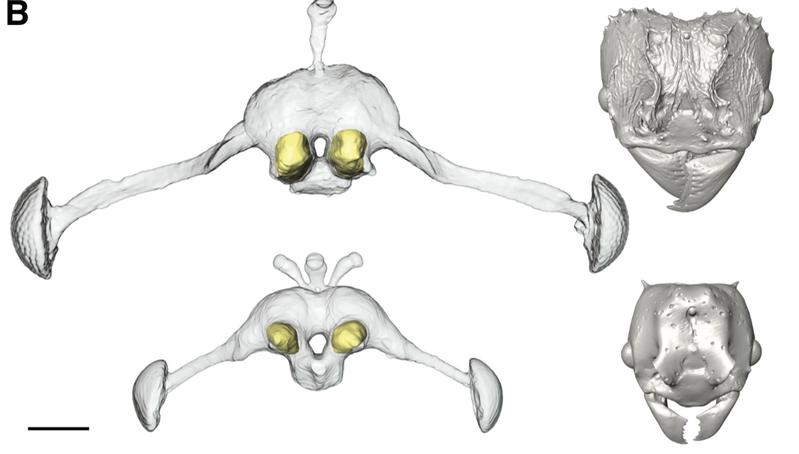