In order to counter the increasing threat posed by multi-drug resistant germs, we need to understand how their resistance mechanisms work. Transport proteins have an important role to play in this process. In an article published in the journal Nature Communications, a German/UK research team led by Heinrich Heine University Düsseldorf (HHU) has now described the three-dimensional structure of transport protein Pdr5, found also in a similar form in pathogenic fungi. The results could help develop mechanisms to combat dangerous pathogens.

Micro-organism resistance to antibiotics in particular is a major problem in everyday medicine. This has seen the number of resistant microbes increase exponentially. As a result, infections that appeared to already have been eradicated using modern drugs now once again pose a potentially fatal threat to humans. The situation is further complicated by the fact that more and more germs are emerging which are resistant to not one but several antibiotics or other drugs.

Research is under way into the mechanisms used by microbes to defend themselves against substances toxic to them. One method is to actively transport the toxic substances out of the cell before they can cause any damage. The microbes use special membrane transport proteins for this purpose. In particular in eukaryotic microbes such as fungi that have a cell nucleus – unlike bacteria, which have none – these membrane proteins are part of the family of ABC transporters (“ATP-binding cassette”). They export the toxic substances by splitting the cellular ATP energy transporter.

In a current publication in Nature Communications, a German/UK research team headed up by Prof. Dr. Lutz Schmitt from the Institute of Biochemistry at HHU has presented the three-dimensional structure of yeast ABC transporter Pdr5 in several functional states. They determined these structures using single-particle cryo-electron microscopy, which makes it possible to examine in particular biological molecules in their natural form at very high resolutions by flash-freezing them to low temperatures.

Not only did the research team show that Pdr5 is a central transport protein in creating the resistance conferred by the membrane protein, it also used solved structures to localise the drug-binding site and define the transport cycle.

For more than 30 years, Pdr5 has constituted the model for PDR proteins in pathogenic fungi such as Candida albicans, which causes Candidiasis. The new findings help to explain what it is at molecular level that enables a single membrane protein to prevent structurally diverse molecules from entering the cell or transport them out of the cell efficiently. The findings can now be used as a basis for designing new drugs in a targeted way to counteract resistance.

For almost 20 years, Professor Schmitt’s working group has been conducting research into explaining how the transport protein works. The researchers succeeded in understanding the structure by working together with Prof. Dr. Ben Luisi’s group in the Department of Biochemistry at Cambridge University. At HHU, the research also involved the working group of Prof. Dr. Holger Gohlke from the Institute of Pharmaceutical and Medicinal Chemistry and the Center for Structural Studies (led by Dr. Sander Smits). 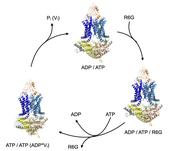 Transport cycle of ABC transporter Pdr5 (orange / blue / yellow). It completes the cycle by means of binding and hydrolysis of ATP to ADP. The substrate R6G (green) is bound at a certain point in the cycle and released again in a subsequent step. 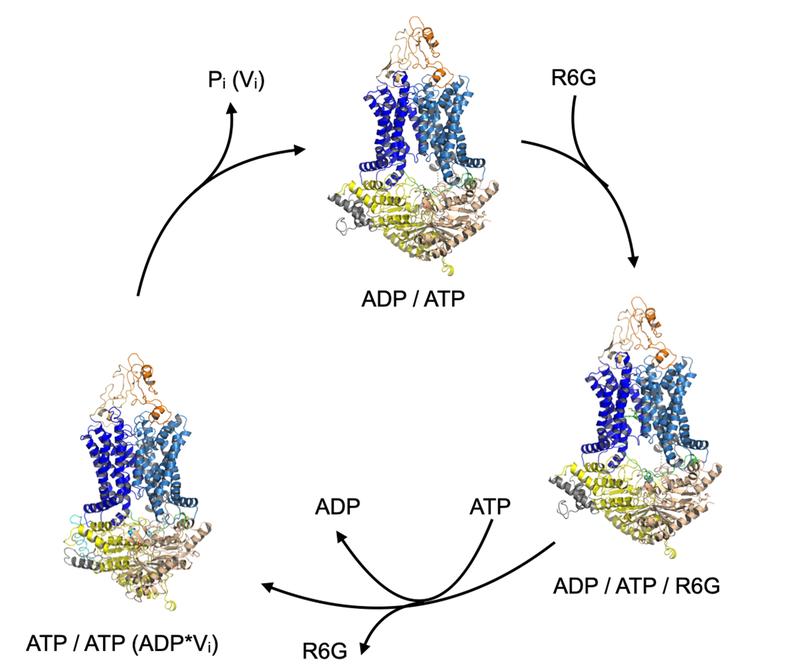