Home > Pressemitteilung: How the brain filters out sounds

How the brain filters out sounds

Whenever bats use echolocation when foraging for food or to communicate with other bats: sounds are omnipresent. How Seba’s short-tailed bat, a species native to South America, filters out important signals from the wide diversity of ambient sound is being examined by researchers at the Institute of Cell Biology and Neuroscience at Goethe University Frankfurt. The most recent finding: the brain stem, which to date had been regarded as being solely responsible for very basic tasks, already processes the probabilities of acoustic signals.

FRANKFURT. Bats are renowned for their echolocation skills, navigation using sound therefore: they ‘see’ with their extremely sensitive hearing, by emitting ultrasonic calls and forming a picture of their immediate environment on the basis of the reflected sound. Thus, for instance, Seba’s short-tailed bat (Carollia perspicillata) finds the fruit it prefers to eat using this echolocation system. At the same time bats use their voice to communicate with other bats, whereby they then utilise a somewhat lower frequency range. Seba’s short-tailed bat has a vocal range which is otherwise only found among songbirds and humans. Just like humans it creates sound via its larynx.

In order to find out how Seba’s short-tailed bat filters out particularly important signals from the wide diversity of different sounds – warning cries from other bats, the isolation calls of infant bats, as well as the reflections from pepper plants in the labyrinth of leaves and branches, for example – researchers at Goethe University Frankfurt recorded the brain waves of the bats.

To this end the researchers headed by Professor Manfred Kössl from the Institute of Cell Biology and Neuroscience inserted electrodes – as fine as acupuncture needles – under the scalp of the bats while the bats drowsed under anaesthetic. Ultimately this measuring method is so sensitive that even the slightest movement of a bat’s head would interfere with the results of the measurements. Despite being anaesthetised, the bat’s brain still reacts to sound.

Successions of two notes with differing pitches, corresponding to either echolocation calls or communication calls, were then played back to the bats. Initially a sequence was played back in which note 1 occurs much more frequently than note 2, for example “1-1-1-1-2-1-1-1-2-1-1-1-1-1-1...”. This was reversed in the next sequence, with note 1 occurring rarely and note 2 frequently. In this manner the scientists wanted to establish whether the neuronal processing of a given sound depended on the probability of it occurring and not, for instance, on its pitch.

Ph.D. student Johannes Wetekam, lead author of the study, explains: “Indeed our research results show that a rare and thus unexpected sound leads to a stronger neuronal response than a frequent sound.” In this respect the bat’s brain regulates the strength of the neuronal response to frequent echolocation calls by downplaying these, and amplifies the response to infrequent communication calls. Wetekam: “This shows that the bats process unexpected sounds differently in dependence on their frequency in order to gather adequate sensory impressions.”
The interesting aspect here, says Wetekam, is that the processing of the signals seemingly already occurs in the brain stem, which it has been assumed to date merely receives acoustic signals and transmits them to higher regions of the brain, where the signals are then offset against one another. The reason: “This probably saves the brain as a whole a lot of energy and allows for a very fast reaction,” says Wetekam.

Professor Manfred Kössl believes: “We are all familiar with the party effect: we filter out the conversations of people in our immediate environment so we can concentrate totally on the person we are speaking with. These mechanisms are similar to those found in bats. If we can better understand how bats hear sound, in the future this could help us to understand what occurs with disorders such as ADHD (attention deficit hyperactivity disorder), which disrupt adequate processing of extraneous stimuli.” 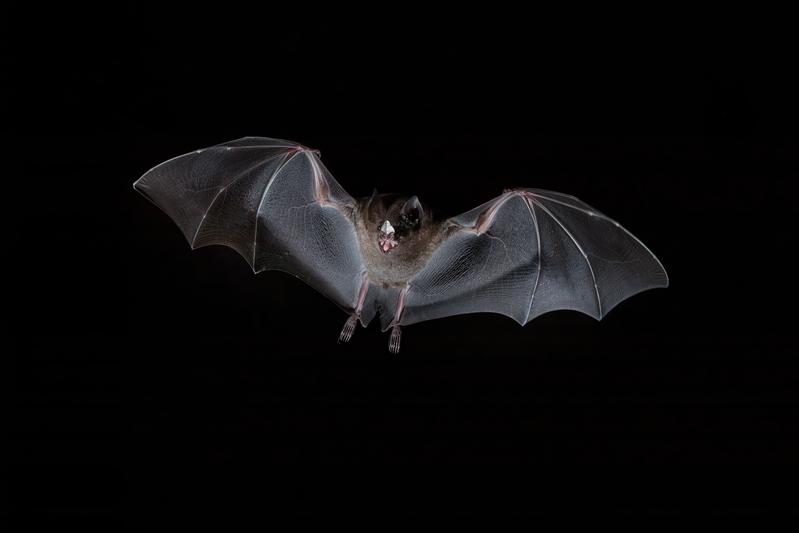