Even if robots are to work autonomously over a longer period of time in the future, they must, of course, comply with the technical and legal rules that apply in the area of application. In the R4Agri project, the German Research Center for Artificial Intelligence (DFKI) and the French Institut national de recherche en informatique et en automatique (INRIA) are developing foundations for AI-based recommendation systems for decision support. Agricultural robotics is the exemplary application area for this basic research; findings from it will be incorporated into transfer projects on the digitalization of agricultural technology running in parallel at DFKI.

Agricultural robots in the field must decide at every moment which action to perform on the basis of current measurement data and considering plant cultivation knowledge, laws, regulations, and specifications of the farm. Be it rapidly changing, often incomplete, or error-laden sensor data, or stable knowledge that has been available for a long time but needs interpretation in context – such automatic decision-making takes AI systems to the edge of what is technically possible today.

R4Agri (Reasoning on Agricultural Data) conducts basic research on new methods, algorithms, and software architectures. The aim is to calculate complex dependencies, draw conclusions from them and propose them for implementation. To this end, the system resorts on highly diverse data types such as sensor data from agricultural machinery, satellite and weather data, and knowledge sources such as plant databases, evaluates them and relates them to each other. The overall goal is to provide a framework for qualitative and logical reasoning about knowledge based on heterogeneous data. Inria is involved with the GraphIK (Graphs for Inferences on Knowledge) team led by Marie-Laure Mugnier, professor of computer science at the Université de Montpellier, and DFKI with the research departments of Plan-Based Robot Control and Smart Data & Knowledge Services.

"What is special about R4Agri is not only the direct cross-border collaboration between two research institutions but also the exceptionally close cooperation with the user networks for a basic research project. They support us in specifying the application scenarios and selecting the required data. This significantly accelerates the transfer path from research to evaluation to application," says DFKI project manager Prof. Dr. Joachim Hertzberg, head of the Plan-Based Robot Control research department.

Whether a farmer controls a tractor, an agricultural producer calculates an optimized application map or a future agricultural robot is to act autonomously in an economically and ecologically sustainable manner – they all have to comply with technical and legal rules that are also in line with current legislation in many European countries and regions. Implementing these rules in a decision support system or autonomous robot control in a way that can be explained and proven is a major challenge given the current state of the art. Distinguishing between noxious and harmless weeds that should be spared to promote plant diversity is beyond today's technological capabilities. Neither can autonomous systems robustly identify plants based on sensor data nor can they know which plant variety is and is not a harmless weed for a given crop in a given state. While there is a wealth of AI literature on qualitative spatial relationship calculi, the grounding of a qualitative spatial relationship such as "near" in sensor data and context is largely unexplored.

"Capturing the complexity of the real world with sensors, interpreting the data in a goal-oriented way, and logically grasping facts in order to draw correct conclusions then is one of the eternal grand challenges of AI," explains Dr. Ansgar Bernardi, deputy head in DFKI's Smart Data & Knowledge Services research department.

R4Agri addresses this challenge by bringing together the technology topics of sensor data interpretation, reasoning, knowledge representation, and data management in one framework. Agriculture is recommended as an application domain where all decisions are influenced by weather, nature, environment, and the diversity of living organisms and ecosystems, and therefore raise particularly interesting questions. The results could also be applied to other domains such as material production with fluctuating raw material qualities, contaminations, and safety requirements to be considered.

In keeping with its basic research nature, R4Agri's results will largely consist of joint publications in AI journals. The use cases will also serve as a springboard for follow-up projects in smart farming and agricultural robotics together with partners from the application area to define the results in a European context.

R4Agri is funded by the German Federal Ministry of Education and Research (BMBF) and the Ministère de l'Enseignement supérieur, de la Recherche et de l'Innovation (MESRI) over a period of 3.5 years. Within the framework of the project, Inria and DFKI plan to exchange scientists for one month at a time.

<
"Remove noxious weeds in the field, but don't use chemicals near water bodies!"

<
"Remove noxious weeds in the field, but don't use chemicals near water bodies!"

"Remove noxious weeds in the field, but don't use chemicals near water bodies!" 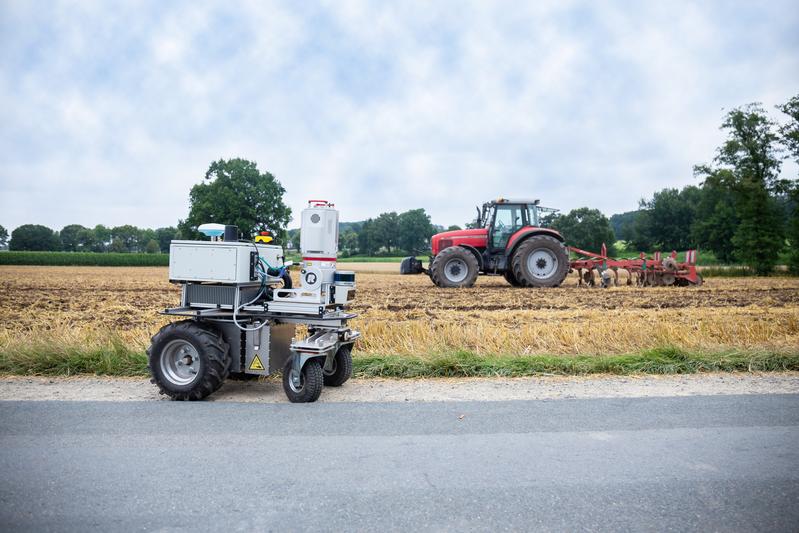