Biochemists use new tool to control mRNA by means of light

A team of researchers at the Institute of Biochemistry at Münster University discovered that by using so-called FlashCaps they were able to control the translation of mRNA by means of light. The results have been published in the journal “Nature Chemistry”.

DNA (deoxyribonucleic acid) is a long chain of molecules composed of many individual components, and it forms the basis of life on Earth. The function of DNA is to store all genetic information. The translation of this genetic information into proteins – which an organism needs to function, develop and reproduce – takes place via mRNA (messenger ribonucleic acid). The DNA is transcribed to mRNA, and the mRNA in turn is translated into proteins (protein biosynthesis). In other words, the mRNA functions as an information carrier. Biochemists at the University of Münster have now developed a new biochemical tool that is able to to control the translation of RNA with the aid of light. These so-called FlashCaps enable researchers to control a variety of processes in cells both spatially and temporally and, as a result, to determine basic functions of proteins.

A cell’s functions depend on special molecules – the enzymes. Enzymes are proteins which are involved in chemical reactions in the cell. They help to synthesise metabolic products, make copies of DNA molecules, prepare energy for a cell’s activities, modify the DNA and degrade certain molecules. In order to develop a tool which enables scientists to determine not only which enzymes fulfil which functions, but also what happens when these are only activated in certain areas, the team of researchers led by Prof. Andrea Rentmeister from the Institute of Biochemistry at Münster University used chemically synthesised FlashCaps. FlashCaps are equipped with a so-called photolabile protecting group – chemical groups which can be removed through irradiation with light – and are incorporated into the mRNA during RNA synthesis.

What is special about this strategy is that here, in contrast to other studies, no modification of the mRNA sequence needs to occur. All that is required is the incorporation of a small molecule (the FlashCap) to almost completely block the translation of a long mRNA. After irradiation with light, there is a return to the natural mRNA – without any modifications. “By using our FlashCaps,” explains Nils Klöcker, one of the lead authors of the study and a PhD student at the Institute of Biochemistry, “it is now possible for every laboratory in the world to activate any mRNA of interest with light without any extra steps.”

By means of elaborate organic-chemical synthesis, the team of Münster researchers were able to develop the FlashCaps – a molecule for controlling mRNA translation by means of light. They showed that this strategy effectively inhibits the translation and, after irradiation with light in cells, reactivates it. The difference between this approach and other strategies is not only that the FlashCaps can be used by every laboratory – without any special expertise or special protocols or modifications being necessary – but also that the mRNA, after being irradiated, exists in its natural structure, which makes it easier to study natural processes in cells.

In their work, the researchers showed that they were able to use FlashCaps to successfully control the translation of mRNA by means of light. They demonstrated this for four different mRNAs in two different cell lines. “This represents significant progress in enabling other researchers to have spatial and temporal control over the translation of the mRNA they are researching,” says Florian Weissenböck, likewise from the Institute of Biochemistry. “FlashCaps have the potential to extend the range of methods used in every mRNA lab.”

https://www.uni-muenster.de/Chemie.bc/en/forschung/rentmeister/index.html Rentmeister Group at the Institute of Biochemistry

<
Spatial control over the translation of eGFP in HeLa cells: Only the irradiated cells (inside the ci ...

Spatial control over the translation of eGFP in HeLa cells: Only the irradiated cells (inside the circle) show green fluorescence from the eGFP, thus indicating a successful translation. 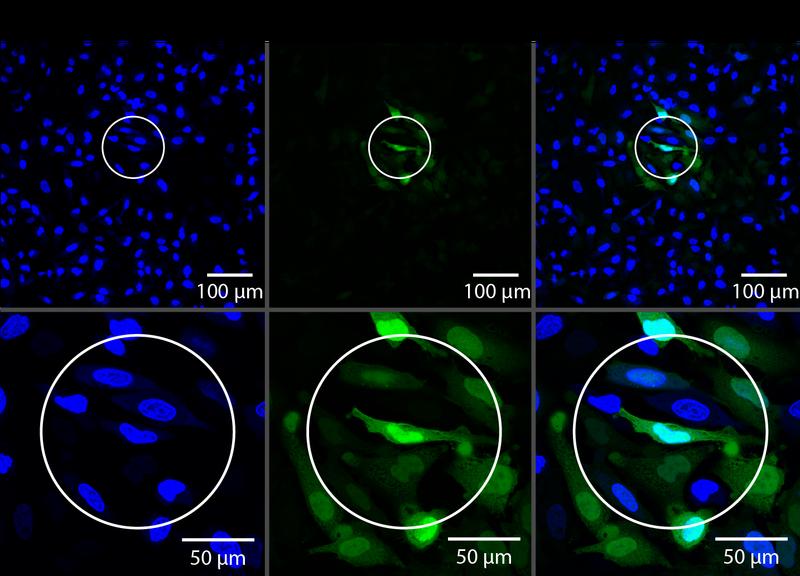