Home > Pressemitteilung: The goal is quantum technology for ...

The goal is quantum technology for everyday use

The new Jena University junior research group “Integrated Quantum Systems” will receive funding worth 3.3 million euros over five years from the German Federal Ministry of Education and Research. The funding confirmation arrived this week and the group will start its work immediately. The five scientists are taking on the task of testing and proving the suitability of modern quantum technologies for everyday use.

“We’ll break new ground in order to transform laboratory set-ups into everyday technology,” says Dr Tobias Vogl, outlining the aim of the working group. The 30-year-old scientist from the Institute of Applied Physics at the University of Jena, Germany heads the new junior research group. “We consider the combination of solid-state photonics and quantum materials to be particularly promising,” he adds.

The new group will focus its research in particular on the properties and possible applications of boron nitride. This boron-nitrogen compound is a non-conductor that can form fluorescent defects that emit individual photons when irradiated with a laser. The crystals of this material used are typically between five and 20 nanometres thick.

Compact sensors with greater precision are one of the goals

There are many potential applications for the new quantum technologies. Tobias Vogl mentions sensors, for example, that will be much more compact than conventional ones and at the same time significantly more precise. Unlike comparable quantum technologies, the new systems will not require complex cooling systems, but will function at room temperature. These new sensors could be used, for example, in the contactless measurement of electrical current: “The advantage of this measurement method is that there are no line losses,” says Vogl. This would be an immense benefit, especially in relation to decentralised energy generation. Another innovation would be transportable compact MRI devices that could be used in emergency medicine, for example.

The junior research group “Integrated Quantum Systems” is based on the “ATOMIQS” project, which stands for Atomically Thin Materials for Integrated Quantum Systems. In this project, new types of quantum light sources are investigated in atomically thin 2D materials and combined with fibre optic cables. Research will be conducted into an efficient interface between the individual quantum assemblies. “We’re also integrating the 2D materials into optical systems, which makes it possible to tailor the photophysical properties of quantum emitters,” says Vogl. These optical systems will first be simulated and optimised in model calculations, and then manufactured using modern nanofabrication technologies.

Tobias Vogl’s junior research group is international. One of the scientists is from Australia and another is from Iran. Vogl is also the coordinator of a second third-party funded project. The aim of this project is to test quantum emitters in space. In cooperation with international partners, a satellite is being configured for this purpose, and is to be launched into space in 2024. Here, too, joint research is being carried out across borders: the researchers come from the USA, China, India, Israel, Thailand and Iran.

Dr. Tobias Vogl aligns an optical chip with a quantum light source at the University of Jena. 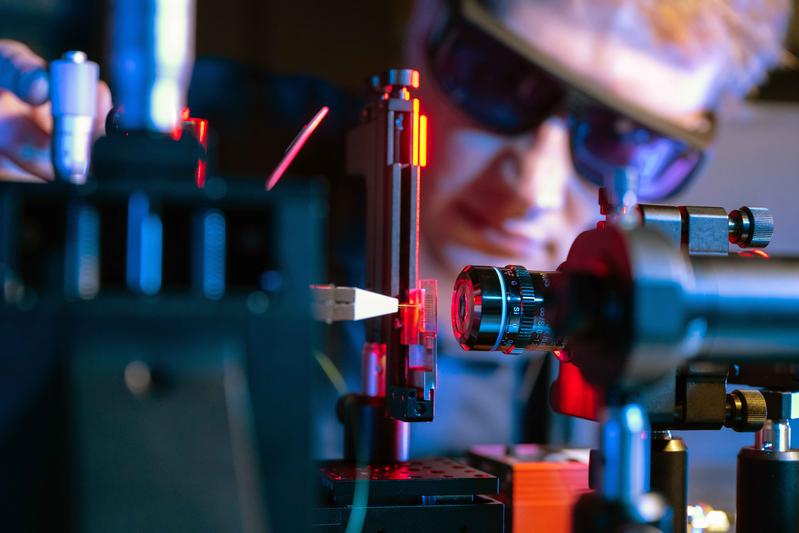