T cells are our immune system’s customised tools for fighting infectious diseases and tumour cells. On their surface, these special white blood cells carry a receptor that recognises antigens. With the help of cryo-electron microscopy, biochemists and structural biologists from Goethe University Frankfurt, in collaboration the University of Oxford and the Max Planck Institute of Biophysics, were able to visualise the whole T-cell receptor complex with bound antigen at atomic resolution for the first time. Thereby they helped to understand a fundamental process which may pave the way for novel therapeutic approaches targeting severe diseases.

FRANKFURT. The immune system of vertebrates is a powerful weapon against external pathogens and cancerous cells. T cells play a curcial role in this context. They carry a special receptor called the T-cell receptor on their surface that recognises antigens – small protein fragments of bacteria, viruses and infected or cancerous body cells – which are presented by specialised immune complexes. The T-cell receptor is thus largely responsible for distinguishing between “self” and “foreign”. After binding of a suitable antigen to the receptor, a signalling pathway is triggered inside the T cell that “arms” the cell for the respective task. However, how this signalling pathway is activated has remained a mystery until now – despite the fact that the T-cell receptor is one of the most extensively studied receptor protein complexes.

Many surface receptors relay signals into the interior of the cell by changing their spatial structure after ligand binding. This mechanism was so far assumed to also pertain to the T-cell receptor. Researchers led by Lukas Sušac, Christoph Thomas, and Robert Tampé from the Institute of Biochemistry at Goethe University Frankfurt, in collaboration with Simon Davis from the University of Oxford and Gerhard Hummer from the Max Planck Institute of Biophysics, have now succeeded for the first time in visualizing the structure of a membrane-bound T-cell receptor complex with bound antigen. A comparison of the antigen-bound structure captured using cryo-electron microscopy with that of a receptor without antigen provides the first clues to the activation mechanism.

For the structural analysis, the researchers chose a T-cell receptor used in immunotherapy to treat melanoma and which had been optimised for this purpose in several steps in such a way that it binds its antigen as tightly as possible. A particular challenge on the way to structure determination was to isolate the whole antigen receptor assembly consisting of eleven different subunits from the cell membrane. “Until recently, nobody believed that it would be possible at all to extract such a large membrane protein complex in a stable form from the membrane,” says Tampé.

Once they had successfully achieved this, the researchers used a trick to fish those receptors out of the preparation that had survived the process and were still functional: due to the strong interaction between the receptor complex and the antigen, they were able to “fish” one of the most medically important immune receptor complexes. The subsequent images collected at the cryo-electron microscope delivered groundbreaking insights into how the T-cell receptor works, as Tampé summarises: “On the basis of our structural analysis, we were able to show how the T-cell receptor assembles and recognises antigens and hypothesise how signal transduction is triggered after antigen binding.” According to their results, the big surprise is that there is evidently no significant change in the receptor’s spatial structure after antigen binding, as this was practically the same both with and without an antigen.

The remaining question is how antigen binding could instead lead to T-cell activation. The co-receptor CD8 is known to approach the T-cell receptor after antigen binding and to stimulate the transfer of phosphate groups to its intracellular part. The researchers assume that this leads to the formation of structures which exclude enzymes that cleave off phosphate groups (phosphatases). If these phosphatases are missing, the phosphate groups remain stable at the T-cell receptor and can trigger the next step of the signalling cascade. “Our structure is a blueprint for future studies on T-cell activation,” Tampé is convinced. “In addition, it's an important stimulus for employing the T-cell receptor in a therapeutic context for treating infections, cancer, and autoimmune diseases.”

The cryo-EM structure of the fully assembled T-cell receptor (TCR) complex with a tumor-associated peptide/MHC ligand provides important insights into the biology of TCR signaling. 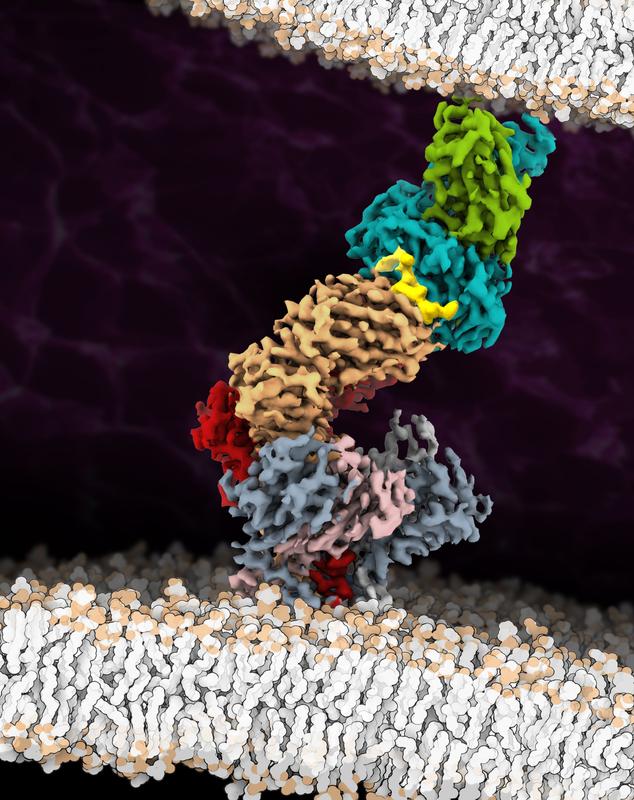