Scientists from the Institute of Neuro- and Behavioural Biology at Münster University have been studying the regulated removal of neural connections in the model system of the Drosophila fruit fly. They find that mechanical forces play an important role in the process.

Nerve cells communicate with one another via long processes known as axons and dendrites, or, more generally, neurites. During development, these processes first grow and form connections with other cells, for example synapses with other nerve cells. Any neurites which are not properly linked, or are no longer needed, are removed by a corrective mechanism known as “pruning”. Such pruning processes can appear drastic, and neurites sometimes seem to be severed directly from the nerve cell. Researchers headed by Dr. Sebastian Rumpf from the Institute of Neuro- and Behavioural Biology at Münster University have now found the mechanism of neurite severing. In a study published in the Journal of Cell Biology, the team show that in sensory nerve cells of the fruit fly Drosophila melanogaster, pruning occurs through mechanical tearing.

In the fruit fly, a large number of neurites are removed through pruning during the pupal phase, or metamorphosis. “ First the neurites become very unstable. This is due to an intrinsic mechanism.” says Sebastian Rumpf. The main phase of pruning coincides with the phase where the animal changes its body shape, which involves strong body contractions. “We have now discovered that these movements place such a stress on the fragile neurites that they are torn off,” Rumpf explains. The severed neurites are then recognised as “waste” and removed by the surrounding tissue.

Animal cells constantly experience mechanical forces, to which they can react, for example, by changing their shape. “Surprisingly little is known about the role of mechanical forces in the nervous system,” say lead authors Dr. Rafael Krämer and Dr. Neele Wolterhoff. “Our work now shows how mechanical pulling can impact nerve cells.” The pruning mechanism was previously unclear, and the role played by mechanical forces had not been investigated. Instead, experts suspected that there had to be a severing mechanism in the neurites themselves. However, effects caused by potential “severing” enzymes could always be better explained in different ways, such that the mechanism remained unclear.

Demonstrating mechanical forces in Drosophila pupae is difficult because the animals cannot be removed from their pupal cases to take force measurements. In order to overcome this problem, Krämer and Wolterhoff followed the pruning process using live video microscopy, taking many long videos of pruning nerve cells. They then demonstrated the existences of pulling forces by analysis of these video recordings. For example, the neurites initially became stretched before they were torn off, indicating that they were under tension. Using genetic manipulations, they could also decrease the morphogenetic movements, which caused defects in the pruning process.

Work in the Rumpf lab is supported by the Cluster of Excellence "Cells in Motion", the Collaborative Research Centre CRC 1348 and the German Research Foundation. 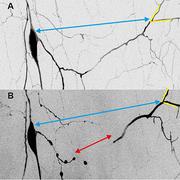 <
The researchers visualized the forces acting on dendrites during pruning by measuring their lengths ...

<
The researchers visualized the forces acting on dendrites during pruning by measuring their lengths ...

The researchers visualized the forces acting on dendrites during pruning by measuring their lengths (blue/red) and the angles at dendritic branchpoints: A) before, B) after dendrite severing. 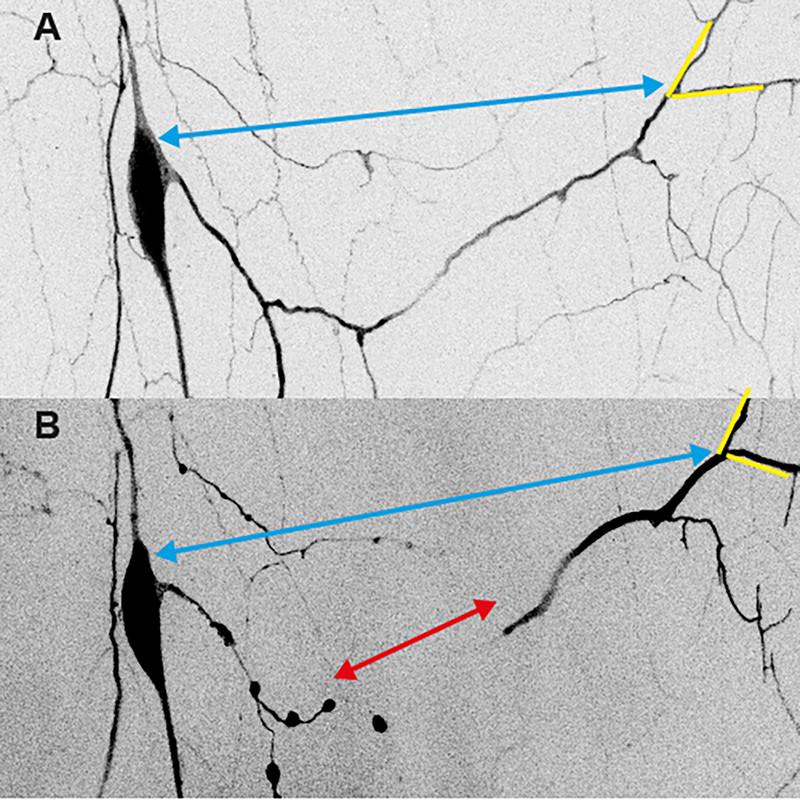